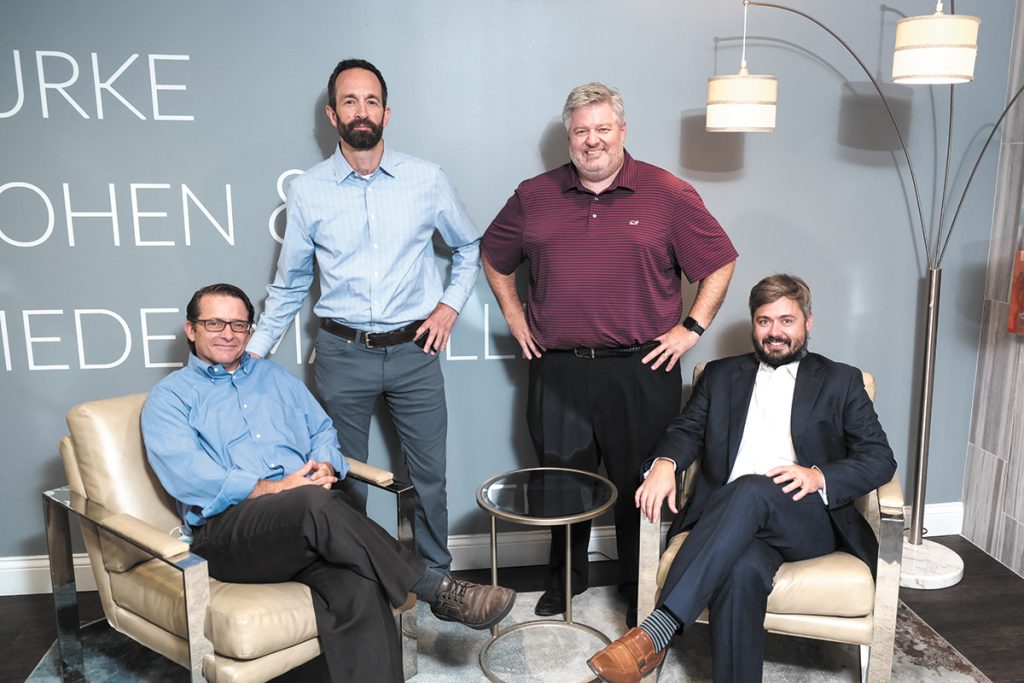 The team at Proteus Discovery Group describes their latest entrepreneurial innovation as a very expensive antacid.

While managing e-discovery projects, attorney Ray Biederman would often get a phone call from either an in-house legal department or outside counsel requesting an update. The immediate impact was heartburn and a day lost to collecting and organizing the data, which by the time it was given to the client was already out of date.

Biederman and the other lawyer-technologists — Hamish Cohen, Jon Mattingly and Sean Burke — got the idea to build a piece of software that could provide real-time updates on any e-discovery project. After two-and-a-half years of development, they are now rolling out the new reporting platform as part of their new venture, DiscoveryMaster LLC.

“What we tried to do was take away some of the barriers because people go to law school to be lawyers not to learn software or how to put together Excel spreadsheets,” said Biederman, co-founder and CEO of DiscoveryMaster. “We wanted to create something that was the path of least resistance for people. They just log in and get all the critical information they need.”

The new computer program is being introduced just as the legal industry’s adoption of technology is accelerating because of the COVID-19 global pandemic. Lawyers were inching toward using online services and software to, for example, reduce the need to travel so much. As the coronavirus outbreak has spread, the shift has gone into high gear.

Proteus sees the rise of e-discovery as a “natural outgrowth” of that move toward technology. However, the team does not see the embrace of new electronic tools as reducing the need for critical thinking and reasoning skills that have long been a part of the legal profession.

Burke believes that the creativity that lawyers exercise when the facts of the case interface with the law has not been negatively impacted by technology.

“… I do think there will be, as time goes on, more objectifiable data,” he said. “Maybe the facts aren’t as disputed as they may have been in years past, but what these facts mean to the case and to the law, you’re still going to have those strong disagreements.”

Biederman stood in Proteus’ conference room and explained the DiscoveryMaster dashboard displayed on the screen.

The software pulls the information flowing into the Relativity review software from all the different so-called channel partners, which are the companies that have the servers with the stored electronic documents. Clicking through the graphs and tabs on the dashboard, clients can descend from the 30,000-foot view of all the projects into a closer overview to see how many documents have been reviewed, when the project is expected to be completed and what the cost is right now.

A little more clicking and clients can get into such specifics as the performance metrics of each individual reviewer and even look at the actual documents. Clients no longer have to call Biederman and wait a day to get an old update. They can log on to DiscoveryMaster and see the status of their projects in real time.

Being litigators in their law firm of Mattingly Burke Cohen & Biederman LLP gave the four attorneys an understanding of the pain points that came with the e-discovery process. The information that DiscoveryMaster is displaying has always been available, but getting to it was an inefficient and tedious task.

Because many attorneys were telling them of the need for a product like this, the Proteus team decided the time was right to move forward. They brought in a group of outside software developers and began building their solution.

“We had enough people asking about it,” Biederman said. “We ourselves felt the pain points, so we decided let’s do it.”

The pandemic is also creating a change in the market that may benefit DiscoveryMaster.

Namely, the amount of data that is now being collected has grown exponentially since many businesses shifted their employees to remote work. As they rely even more on technologies such as video conferencing to keep their operations running, more data is being stored.

“It’s unfathomable what impact this is going to have on litigation a year or two years from now when people are asking about Microsoft Teams messages from during this time period,” Biederman said. “So the need for this is going to become even more acute because there’s going to be such an explosion of electronic data.”

Information that will be extracted from Microsoft Office 365, TikTok and other platforms will provide a wealth of details including time, geolocation and visual elements.

Moreover, the content of the communications themselves may be richer. Biederman noted people are no longer as candid in their emails as they once were, but they are still being very frank in the messages they send through Teams, Slack and texts.

“So now we’ve got tools to be able to gather this data in more efficient ways,” he said. “We’re going to have to evolve in how we’re treating these devices and communicating with each other.”

Consequently, Proteus may not want to throw away the antacid just yet.

The law does not have to change much to accommodate the digital age because the definitions of “document” and “communication” are “extremely broad,” Mattingly pointed out. The heartburn will come in finding all of them.

“Attorneys have an ethical obligation to preserve relevant information wherever it’s found,” Mattingly said. “The challenge of that, it’s just not found in paper documents and email messages. It’s found in a hundred different places.”•