Home » VoteCast: Inflation top concern, but democracy a worry, too 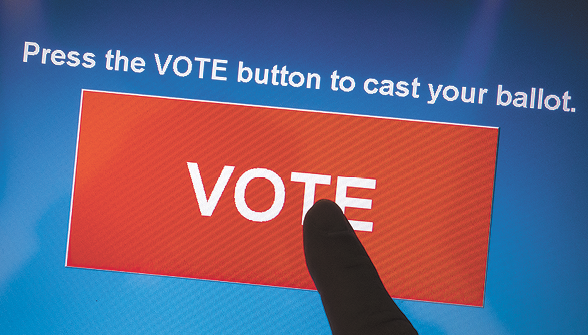 Just as Republicans had hoped, high inflation was the top consideration for voters in the midterm elections, AP VoteCast shows. But the survey reveals that a core issue for President Joe Biden, the survival of democracy, also weighed heavily on voters’ minds, as control of Congress — and a choice between sharply contrasting visions of America — hung in the balance.

The result, as of early Wednesday, was an election in which Democrats displayed strength, appearing to avoid the massive losses that often beset the party in power during a midterm vote. With ballots still being counted, though, it was unclear if they would retain control of at least one chamber of Congress.

The survey depicts a country mired in pessimism about America’s future and its political leadership, with lingering tensions in how people feel about Biden and his predecessor, Donald Trump, shaping choices at the ballot box.

The detailed portrait of the American electorate is based on results from VoteCast, an extensive survey of more than 94,000 voters nationwide conducted for The Associated Press by NORC at the University of Chicago.

About half of voters say inflation factored significantly in their vote, as groceries, gasoline, housing, food and other costs have shot up in the past year and raised the specter of inflation. The economy was an overarching concern for voters, about 8 in 10 of whom say it was in bad shape. A slim majority of voters say Biden’s policies caused inflation to be near 40-year highs, while just under half are blaming factors beyond his control, such as Russia’s invasion of Ukraine.

Slightly fewer voters — 44% — say the future of democracy was their primary consideration. On the campaign trail, Biden warned that Republicans are posing a threat to democracy. Many GOP leaders continue to cast doubt on the U.S. electoral system, claiming that the 2020 presidential election, which Trump lost, was rigged.

Yet the “Make America Great Again,” or MAGA, movement sparked by Trump appears to have tightened its grip on Republicans. Nearly two-thirds of GOP voters say they support the MAGA movement, a sign of the potential gridlock with Biden’s White House should Republicans win majorities in the House or Senate.

Republicans bet on voter dissatisfaction with inflation, crime and immigration to help them win. Biden and his fellow Democrats countered that the U.S. middle class is poised for a renaissance because of their investments in infrastructure, computer chip production and clean energy projects.

Nearly half of voters name the economy the top issue facing the country, and those voters back Republicans more than Democrats. No other issue comes close, but many other issues are named most important by about 1 in 10 voters. That includes abortion, health care, climate change and gun policy, where Democrats outpace Republicans by at least three to one.

Voters have become increasingly demoralized as the country’s political divisions have hardened. Roughly three-quarters say the country is headed in the wrong direction. That figure is higher than it was in the VoteCast survey of voters in 2020, at the height of the coronavirus pandemic.

Two years ago, the COVID-19 pandemic was considered the country’s top issue; now just 2% of voters name it the top priority as other issues have taken center stage.

Biden’s election was in part because of views that the pandemic was out of control under Trump’s leadership, VoteCast showed two years ago. A majority of voters said they thought he “cares about people like them.” A smaller percentage of 2022 voters say that.

Even Democrats harbor doubts about Biden, though they showed up for Democratic candidates anyway. Nearly a third of voters for Democratic congressional candidates say Biden is not a strong leader. One in five Democrats says he lacks the mental capability to serve effectively as president. And about 3 in 10 disapprove of his economic leadership.

The 2020 presidential election still hangs over these congressional, state and local races. Almost two-thirds of Democratic voters say they cast ballots to show opposition to Trump, while about 7 in 10 Republican voters say their votes were about defying Biden.

Inflation has been a clear blow to the well-being of many Americans. A third of voters describe their families as falling behind financially. That’s nearly double the percentage of the electorate that said the same two years ago.

About half of voters in the suburbs backed Democrats nationally, slightly less than in 2020 and 2018. Democrats still fare better with women, while men are more likely to prefer Republicans. Voters under 45 tend to favor Democrats; older voters generally lean Republican.

Facing headwinds on the economy, Biden and many Democratic candidates sought to tap their base’s outrage after the Supreme Court overturned the abortion protections in Roe v. Wade, the 1973 decision enshrining the right to abortion.

VoteCast also shows the reversal was broadly unpopular. About 6 in 10 say they are angry or dissatisfied by it, while about 4 in 10 were pleased. Among Democratic voters, about 6 in 10 say the Supreme Court’s decision to overturn Roe made them angry.

Most voters also were at least somewhat concerned about crime in their communities, and half say the Biden administration has made the U.S. less safe from crime.

Despite concerns about democracy, about 4 in 10 voters say they are “very” confident that votes in the midterm elections will be counted accurately, an improvement from the percentage of the 2020 electorate that said so.

Many voters came into the election with entrenched views. About half say they knew all along how they would vote, while a third decided over the course of the campaign, and roughly 1 in 10 say they made their choice in the last few days.