Before and after: An 1830s canal house in Evansville attorney Beverly Corn's hometown of Lagro languished in disrepair until she and a business partner bought it at auction and undertook a total restoration. (Photos courtesy of Beverly Corn)

Before she even saw the house at auction, Beverly Corn firmly put her foot down with a resounding “no.”

Despite a friend’s encouragement, the Evansville attorney refused to budge. She was not purchasing a little house on the Wabash River. With historic building restorations picking up in her childhood hometown of Lagro, Indiana, Corn’s friend thought it would be a chance to bring another old property back to life.

“I kept saying, ‘I’m not doing it. I don’t know what donkey you think is going to drag me into this, I’m not doing it,’” Corn said. “It just so happened that I was visiting family in the area one weekend in 2017, and she said they were doing an auction of that little canal house. And again I said, ‘I’m not buying it. Just get that out of your head.’”

But she agreed to attend the auction. The house was just 500 square feet. She met up with her friend’s son, Justin Gillespie, who would eventually become her business partner. “I get down there and the doors were boarded up, the windows were boarded up, and Justin had a crow bar and he said, ‘You want to go in?’ We walked in and half of the floor was gone and there were huge holes in the roof,” Corn recalled.

When asked why she was so hesitant about buying the house, Corn said she lived 300 miles away and worked full-time, so how could she possibly orchestrate such a renovation under the circumstances? Only with a business partner, she said.

Down to the bones

After buying the neglected canal house for just $2,700, Corn and Gillespie got to work on visualizing what they could possibly do with their purchase. Gillespie knew he wanted to continue cleaning up and reinventing his hometown, but the property seemed slightly daunting even to him.

“I was looking at it and thought it would be nice to preserve that kind of history, but at the same time looking at it we were like, ‘I don’t know if we’re going to be able to or not.’ It was in pretty sad shape,” he said.

Luckily, contractors and architects hired to investigate the property confirmed it was possible to save the structure. Constructed around 1835, the canal house was built by and for Irish immigrants who were hired to construct parts of the Wabash and Erie Canal. Renamed the Riparian House by Corn and Gillespie, the property is one of six remaining canal houses in Lagro and the only house maintaining its original structure.

“We wanted to keep that integrity of what it was,” Corn said.

After gutting the interior walls, tearing out the broken flooring and salvaging the metal roofing, the pair was able to save three of the original exterior walls, the roof system and the home’s foundation.

“Once the exterior was secured and the new roof put on, I was able to start doing a lot of work on it myself and also with Beverly’s help, and others pitched in wherever they could,” Gillespie said.

They set to work washing the walls — a job Corn gags at the memory of — and installed metal conduit to conceal electrical wires. The dirt floor cellar was finished for storage, a small bathroom installed and a deck added on to the back of the house overlooking an unobstructed view of the river.

Of all their efforts put into restoring the Riparian House, Gillespie said he is proudest of the cherry-stained wood floors. Though not original, he purchased the wood planks from a local company, tongue grooved the planks by hand and stained them himself. The goal was to keep things looking as authentic as possible.

“Then we were able to salvage the steel off of the old roof and use it for the interior ceiling, and salvaged the original doors for the bathroom,” he said. “We tried to preserve as much as we could off of the original place.”

The business partners originally had their minds set on turning the home into a craft beer and wine tasting venue, but realized over the course of a year that their plan wasn’t going 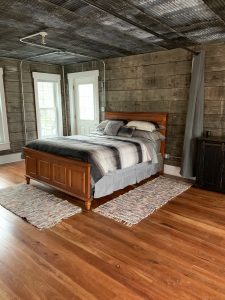 to happen. Hitting roadblock after roadblock led Corn and Gillespie to finally shift gears, instead deciding to transform the space into an Airbnb rental property.

Visitors can kayak or canoe on the river, adventure on the bike trail just yards away from the back deck, or visit nearby Fort Wayne, historic Wabash or Salamonie River State Forest. Wood, old metal, stained glass, comfortable furniture and antique pieces make the canal house a cozy getaway, Corn said.

“It’s very modern and comfortable, but it’s not high-end. It’s rustic chic,” she said of the Riparian House. “There were times where I thought, ‘Will we ever make it something?’ But when we started to set the furniture in it, I was almost in tears because it was like — this place is welcoming people again.”

With a nearly completed project under their belts, Corn and Gillespie both say they are ple

asantly surprised at how well they worked together to restore the

“After meeting with her and starting on this project, it was kind of eerie that every time I made a suggestion, she was thinking the same thing. It was like we were, most of the time, on the same wavelength for the ideas we had on the place,” Gillespie said.

“We had absolutely no reason why our partnership should have worked,” Corn added. “We had every reason for it to fail. But even though we had nothing in common except our common family connection, we have clicked on literally every aspect of this building. We both have forged a lifetime friendship.” 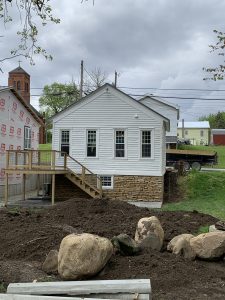 As they put the final landscaping touches on the property, both business partners reflected on the past two years of restoring the little canal home. Corn said she expects Riparian House to be listed online at Airbnb.com at the beginning of July.

“The whole experience I’m definitely proud of from top to bottom,” Gillespie said. “Everyone said we were out of our minds, ‘there is no way this place could be saved,’ but we were able to pull it off, and those same people are in awe because of how nice it looks. Even including Beverly and I — it’s exceeded both our expectations.

“Regardless of how well the Airbnb does,” he continued, “we met our goal of preserving a small piece of history that was probably at risk of being demolished and being forgotten about.”•