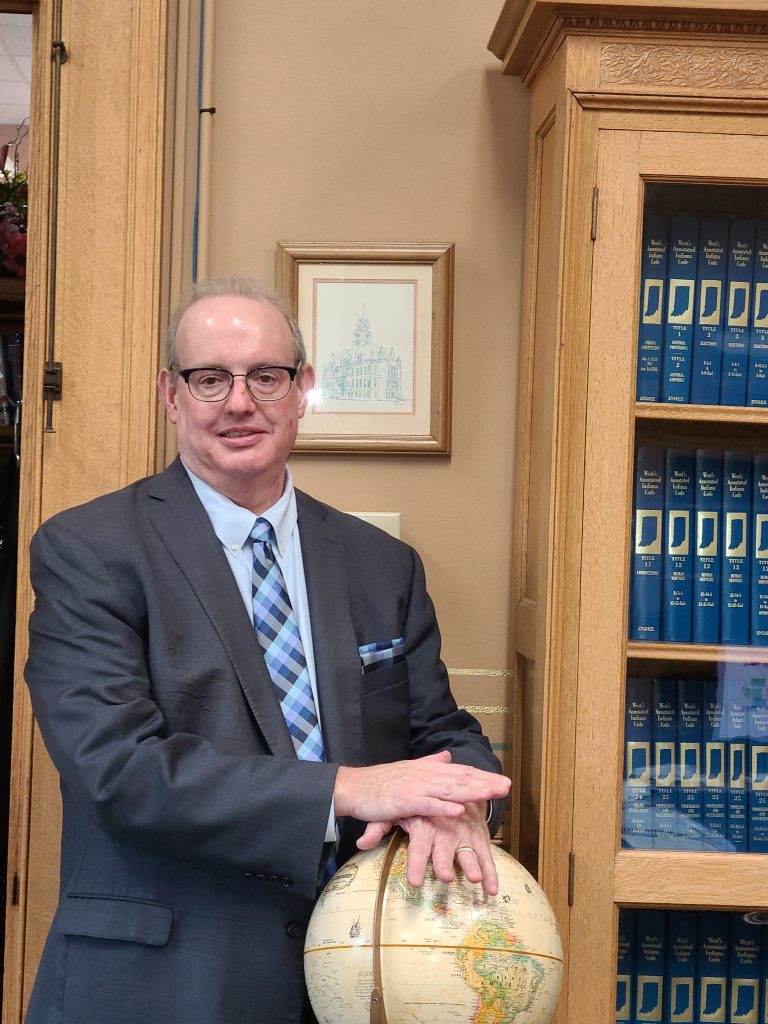 The pivotal moment in Jasper Circuit Judge John Potter’s life that led to his decision to enter the legal profession goes back to his days in undergrad.

“I had a very good friend from college who made a terrible marriage mistake,” Potter recalled. “She married what turned out to be an abuser.”

Potter said his friend’s college roommate had a father who was an attorney. After Potter’s friend called for help to escape her abusive marriage, that out-of-state attorney connected the woman with a local lawyer, who swiftly established a hedge of legal protection around her.

“A few days later, she had possession of the home, custody, a protective order, and provisional support and maintenance,” Potter said. “That quick-response application of legal power to help my friend was the moment I decided to switch career paths from graduate school to law school. I wanted to be able to do that, as well.”

Fast forward, and Potter graduated from Indiana University Robert H. McKinney School of Law in 1996 and started practicing law with a local lawyer in his hometown of Rensselaer.

Potter eventually opened his own general practice in 2000. Six years later, he was appointed to the Jasper Circuit Court by then-Indiana Gov. Mitch Daniels to fill a vacancy. He’s remained on the bench ever since.

Thinking about his time in the legal profession, Potter quoted Malcolm X to describe what the role of judicial service means to him.

“I am for truth, no matter who tells it. I am for justice, no matter for whom it is for or against,” Potter recited.

Potter is the latest Indiana trial court judge to be featured in the Indiana Lawyer spotlight series focused on the state’s judicial officers in more rural communities. Here’s what he had to say about being a judge, the practice of law and life off the bench.

Indiana Lawyer: Where do you receive inspiration and/or encouragement?
Potter: The most prized possession in my office is a messily glued together puzzle of a puppy in a bucket with a hand-colored “thank you” sign. A developmentally delayed child in need of services made those for me when she was turning 18 years old and leaving the system. She was literally dumped in our county off the interstate, and she was a difficult placement because of aggressive, violent behavior. She told me that I always talked to her in court and was kind to her.

What’s a song or book that you’ve been gravitating toward recently?
My son is an avid participant in musical theater, so I only have various show tunes stuck in my head that he sings around the house from his latest performance. This summer it’s “Be Our Guest” from Disney’s “Beauty and the Beast.” I am currently reading all the nonfiction books written by Ben Macintyre, a London Times correspondent who writes books about the Cold War and World War II spying based upon recently declassified British MI5 and MI6 documents.

What has been the most fulfilling aspect of serving as a judge?
Every once in a great while, the justice system works a wonder and I get to be part of the life of a child who is saved and rehabilitated, or the life of an alcoholic or drug addict who truly cleans up their life and moves forward.

Name a memorable moment or experience from your time on the bench that you’ll never forget.
I was attending a CLE in Terre Haute and (there was a) rededication of the federal building with a mural of the signing of the Magna Carta. I left early because I had always wanted to see the Eva Kor Holocaust Museum in Terre Haute. I arrived at the museum just as a tiny elderly woman was exiting and told me the museum was closed. She asked who I was and what I did because I was in a nice suit and did not look dangerous. I told her I was a judge and I would come back another day. She said, “No, this is important and you need to see it.” She grabbed me by my shirt cuff and literally pulled me inside. I was helpless in the grasp of a 4½-foot-tall elderly woman. She was, of course, Eva Kor herself. She gave me a personal tour of her museum. For that brief time, I am grateful to have met her and experienced her message. She can forgive and find peace after being a Dr. Mengele Auschwitz experiment, along with her twin sister. There is hope for all the people that come through the legal system.

What’s your favorite thing to do once you hang up the robe at the end of the day?
I go home and play with my developmentally disabled son, Wesley, who is seemingly always glad to see me or lose a video game against his older brother, my teenage son, Grant. After bedtime, I confess that I am a television junkie for bad television like ghost and Bigfoot hunting shows because they require no thought to view and are mindless entertainment.

If you could change one thing about the practice of law, what would it be and why?
There are many stock answers to this question, such as collegiality, professionalism, education, etc. Simply put, I wish that kindness was not so often professionally equated to weakness. There is a simple lack of what my grandmother would call “manners” in the practice of law.

What is one thing you wish the legal profession knew about you that they don’t already?
I am a playwright. I have written the last two Halloween plays that the Fendig Theatre for Children produced in 2020 and 2021.•