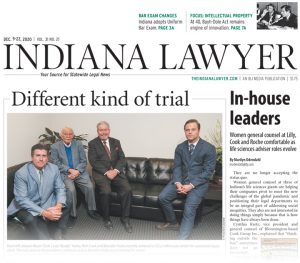 Trying what a law firm saw as an eight-figure personal injury lawsuit to a successful jury verdict during a pandemic was just one aspect of an unusual recent trial. Women general counsel at three of Indiana’s life sciences giants are helping their companies pivot to meet the new challenges of the global pandemic and positioning their legal departments to be an integral part of addressing social inequities. And the Bayh-Dole Act has contributed hundreds of billions of dollars to the U.S. economy and supported millions of jobs since it was signed into law 40 years ago. But the landmark legislation now hailed as an engine of innovation and enterprise almost never came to pass. 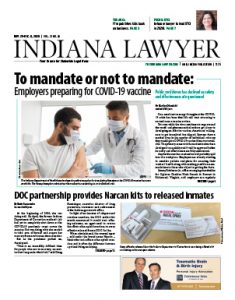 While the pandemic continues to rage and pharmaceutical makers get closer to developing an effective vaccine, Americans’ willingness to get inoculated has slipped. Battles over the vaccination will probably spill into the workplace, and employers are already starting to consider policies and plans. In light of an increase of relapses and overdose numbers, the Indiana Department of Correction this month announced it would start offering naloxone, an agent used to reverse the effects of an opioid overdose, to every offender released from a DOC facility. And the Indiana General Assembly is considering taking another step to recognize that heritage through legislation that would uphold the validity of tribal court judgments. 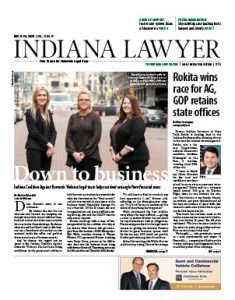 Republican Todd Rokita cruised to victory in the closely watched Indiana Attorney General race as Republicans also made gains in the Indiana Statehouse and in courthouses around the Hoosier State. Pro bono attorneys came to the aid of a grateful client, getting down to business to resolve the financial mess she was left in by her ex-husband. And an adoption attorney is fostering hope with a new docuseries exploring Indiana's foster care system. 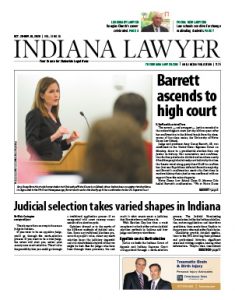 With the most partisan vote in modern history closer to a presidential election than any prior confirmation, 7th Circuit Court of Appeals judge and Notre Dame law professor Amy Coney Barrett ascended to the United States Supreme Court. As Indiana voters go to the polls, they'll be deciding on judges in any number of ways. And as Indiana welcomed 337 new lawyers to the profession, experts say new lawyers and law students are increasingly seeking to make change in their legal careers. 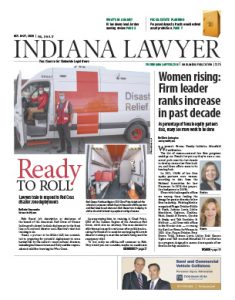 Lawyers who have taken Red Cross disaster deployment training are ready to roll to deliver emergency aid when they get the call. Women law firm equity partners have made slow but steady gains over the past decade, but they see more work ahead to increase diversity. And the deans of Indiana University Maurer and McKinney schools of law are co-chairing a panel weighing the naming of facilities for former president IU David Starr Jordan. 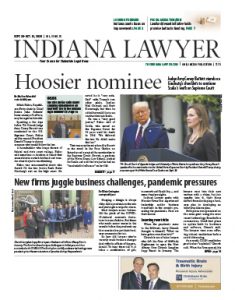 As Hoosiers reacted to the nomination of 7th Circuit Court of Appeals Judge and Notre Dame law professor Amy Coney Barrett to the nation’s highest court, they also fondly recalled the connections shared with the late Justice Ruth Bader Ginsburg on her many visits here. And while new laws firms and those that reorganized just before the pandemic juggled numerous pressures, Indiana bankruptcy lawyers say they keep expecting a flood of COVID-related filings that so far has not come. 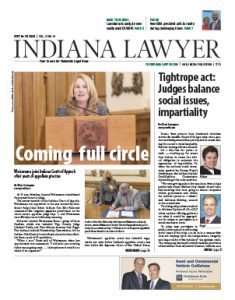 After a career as one of Indiana’s most prolific appellate practitioners that began clerking for a Court of Appeals judge, Leanna Weissmann has come full circle with her appointment to the appellate bench. Judges who wish to advocate for social issues must walk a fine line to preserve their impartiality. And as new and returning law students enter the unknown during a pandemic, those in the Class of 2020 who ended their law school experience virtually excelled in a one-of-a-kind bar exam. 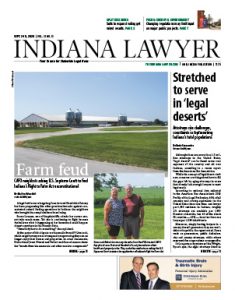 An 8,000-hog farm in Hendricks County that neighbors say has harmed their health and property values is the subject of a lawsuit over the Indiana Right to Farm Act that plaintiffs hope to take to the United States Supreme Court. More than 40 percent of Indiana counties are “legal deserts,” with less than one lawyer per 1,000 residents. See how all 92 Indiana counties compare, and hear from people who are among a few who practice in their hometowns. And a trio of court rulings shook up Indiana election laws, leaving a still-unresolved picture of what voting may look like on Nov. 3. 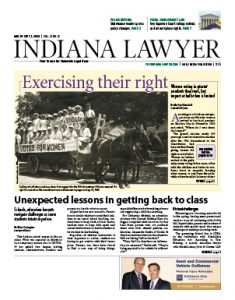 After winning the right to vote 100 years ago, women go to the polls in greater numbers than men, but their impact is limited. Students heading back to school amid the coronavirus pandemic created unexpected lessons for parents, teachers and education attorneys. And with calls for racial justice continuing to reverberate, statehouse leaders are pushing for policy changes to police law enforcement. 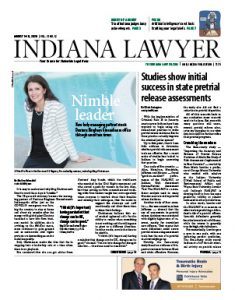 At 38, the new managing partner of Dentons Bingham Greenebaum’s Indianapolis office is taking charge at a challenging time, finding that “nimble” is her favorite word of late. Indiana’s new pretrial risk assessment tools is showing some initial success, new studies show. And a trio of northern Indiana judges have a honey of a hobby that keeps them busy as beekeepers.