AP source: Ex-FBI No. 2 to be criticized in watchdog report

The Justice Department’s inspector general is expected to criticize former FBI Deputy Director Andrew McCabe as part of its investigation into the bureau’s handling of the Hillary Clinton email probe, a person familiar with the matter said Thursday night.

Indiana Attorney General Curtis Hill has joined with the attorneys general of all 50 states and other U.S. territories in support of federal legislation ending forced arbitration after incidents of workplace sexual harassment.The National Association of Attorneys General sent the letter voicing its support for such legislation to Congressional leaders Monday.

Former Indiana Department of Child Services Director Mary Beth Bonaventura will join the Indiana Attorney General’s Office as special counsel Monday, a move that comes less than a month after she resigned from her DCS post with a scathing resignation letter to Gov. Eric Holcomb.

Joshua Minkler, U.S. Attorney for the Southern District of Indiana, is among nine U.S. attorneys appointed to serve a two-year term on the Attorney General’s Advisory Committee of U.S. Attorneys, the U.S. Department of Justice announced Monday.

A transgender inmate is suing the Indiana Department of Correction and is seeking a preliminary injunction that would require the department to provide hormone therapy to treat gender dysphoria. 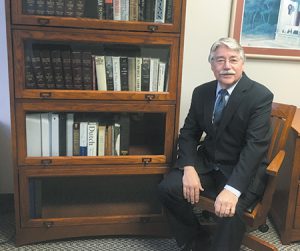 Former Indiana Attorney General Greg Zoeller has been a lifelong advocate of mediation and alternative dispute resolutions, building his career around the notion that many disputes can be resolved short of trial. So when Zoeller left the attorney general’s office, it made sense for him to continue his advocacy for mediation and ADR work in the private sector. 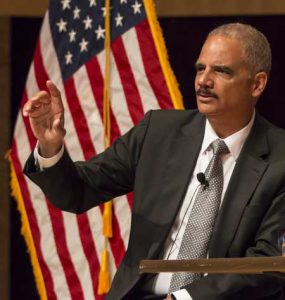 Former U.S. Attorney General Eric Holder remembers well the worst day of his time in office. It was just a few days after the deadly shooting at Sandy Hook Elementary School in Newtown, Connecticut, and he had to make a trip to the classroom where nearly two dozen young children were gunned down.

Attorney General Jeff Sessions is promising his Justice Department will lead the charge in helping cities fight violent crime, and police chiefs are ready with their wish lists. But the federal law-enforcement agencies could receive less funding in a budget plan to be introduced Thursday.

Common Cause Indiana stepped into Sen. Joe Donnelly’s Indianapolis office Tuesday afternoon and turned over a petition with more than 4,000 signatures opposed to the nomination of Alabama Sen. Jeff Sessions for U.S. Attorney General.

As a senator, Jeff Sessions became Congress’ leading advocate not only for a cracking down on illegal immigration but also for slowing all immigration, increasing mass deportations and scrutinizing more strictly those entering the U.S. As attorney general, he'd be well positioned to turn those ideas into reality.

Shy and admittedly awkward, Janet Reno became a blunt-spoken prosecutor and the first woman to serve as U.S. attorney general, yet she also was the epicenter of a relentless series of political storms, from the deadly raid on the Branch Davidian compound at Waco, Texas, to the seizure of 5-year-old Cuban immigrant Elian Gonzalez. She died early Monday at 78.

Another tool for courts, police to combat drug abuse

Through Recovery of Indiana, a behavioral health program aimed at reducing drug abuse rates across the state, the Front Door Opiate Reduction Initiative is launching in new locations in Indiana to give courts and law enforcement officers additional options besides jail time for drug offenders struggling with serious addictions.

A judge in Indianapolis dismissed a lawsuit Monday in which an Indiana Department of Child Services family case manager claimed she had an excessive caseload that put children at risk.

A Republican state senator from Logansport says he will seek the Republican nomination for state attorney general.