In a continuing trend, bankruptcy filings in 2017 continued to fall, but at a slower rate than any time since 2010, a new report issued by the U.S. Courts says.

A group representing the unsecured creditors of HHGregg has filed suit against Andretti Autosport in an attempt to claw back nearly $1.5 million in sponsorship money the now-defunct retailer paid the racing team in the months leading up to its bankruptcy.

A South Bend man had no standing to challenge the assignment of loan documents and therefore was not entitled to relief from judgment in a mortgage foreclosure, the Indiana Court of Appeals ruled Wednesday.

A now-bankrupt telecommunications provider cannot avoid making payments invoiced by its supplier prior to the filing of an involuntary bankruptcy petition because the supplier has a legitimate defense under the “new value” concept in U.S. Bankruptcy Code, the 7th Circuit Court of Appeals has ruled.

The two Ohio-based grocery chains that agreed to purchase 26 stores from Marsh Supermarkets have reached a settlement with pharmacy giant CVS Health, getting them a step closer to finalizing the transaction totaling $24 million.

A divided U.S. Supreme Court has ruled that debt collectors can use bankruptcy proceedings to try to collect liabilities that are so old the statute of limitations has expired.

A northern Indiana attorney who was involved in a Florida-based legal scheme that purported to assist clients in foreclosure and bankruptcy matters has been suspended from the practice of law for 30 days, the second of five Indiana attorneys involved with the Florida group to be disciplined by the Indiana Supreme Court.

The lack of expert testimony in a yearslong bankruptcy case led to the appropriate grant of summary judgment to an Indiana attorney, the Indiana Court of Appeals found Tuesday.

General Motors Co. is asking the U.S. Supreme Court to overturn a lower court's ruling that held it responsible for ignition-switch injuries and deaths that occurred before its 2009 bankruptcy. 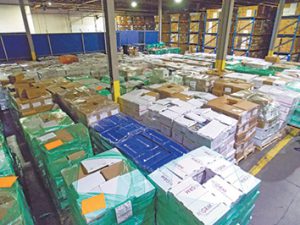 The student records are only one aspect of this bankruptcy. There are employee records, pension benefits, 401(k) retirement funds plus lawsuits previously filed by federal agencies and some states’ attorneys general.

Indianapolis-based chemical company Vertellus Specialties Inc. is at odds with the U.S. Environmental Protection Agency over whether its proposed sale would provide adequate resources to address environmental cleanup needs at Vertellus-owned sites in Indiana and elsewhere.

The 7th Circuit Court of Appeals was divided Wednesday over whether debt collectors violated the Fair Debt Collection Practices Act when they attempted to collect stale debts in Chapter 13 bankruptcy proceedings.

Puerto Rico can't use a local law to restructure the debt of its financially ailing public utilities as it tries to overcome a decade-long economic crisis, the U.S. Supreme Court ruled Monday.

Billionaire brothers Charles and David Koch have made plenty of good business decisions over the years. Placing millions of dollars with Ponzi-scheme mastermind Bernard Madoff may have been one of them.

Bankruptcy attorney Mark S. Zuckerberg recently described the current state of his practice: “Nobody’s coming into my office; nobody’s calling me; nobody’s paying me.” His loneliness can be tied to the drop in bankruptcy filings. In 2015, petitions nationally fell to 860,182, an 11 percent decline from 2014 and the lowest number of filings since 2007.

Indiana Legal Services Inc. has received a $10,000 award to help families in the northern part of the state with bankruptcy filings.

Individual consumer debt bankruptcy petitions declined in 2014, but for a significant number of people, this wasn’t the first time they’d filed for bankruptcy in the last eight years.