A document penned this week by the Indiana Attorney General called “Parents Bill of Rights” has caused a stir among parents and political parties alike, partially taking aim at topics of critical race theory and social emotional learning in schools.

The Supreme Court decided unanimously Monday that the NCAA can’t enforce rules limiting education-related benefits — like computers and paid internships — that colleges offer to student-athletes, a ruling that could help push changes in how the student-athletes are compensated.

First-year law students who did more online classes have a different perspective about virtual schooling during the pandemic than their more senior classmates, according to a study presented by AccessLex Institute and Gallup.

A former Rose-Hulman student who sued the school after he was suspended and whose attorney was warned for criticizing a magistrate judge did not succeed in getting summary judgment turned around in his favor. The 7th Circuit Court of Appeals also handed down an additional warning to the lawyer.

Indiana’s governor says he won’t prevent Indiana University from requiring proof of COVID-19 vaccinations for all students and employees, despite many state officials arguing against that policy.

A day after the state attorney general issued a non-binding opinion that the policy was illegal, IU said it “will further consider our process for verifying the requirement.”

The attorney general says the university’s decision to require proof of COVID-19 vaccinations from all students and employees is illegal under a new state law banning state or local governments from issuing or requiring vaccine passports.

Indiana’s three law school deans will be joining the Indiana State Bar Association’s continuing webinar series about race on Thursday, offering their perspectives and insights into issues related to education.

A letter to Gov. Eric Holcomb calls on him to prohibit any state university from mandating vaccines that don’t have full U.S. Food and Drug Administration approval.

All the new admittees introduced themselves to the state and federal judiciary. But instead of just reciting their names, they followed the suggestion of Indiana Chief Justice Loretta Rush and also expressed their gratitude.

The University of Illinois trustees’ vote followed a months-long review by a university task force, which voted 6-1 to remove Marshall’s name.

Fired Cathedral teacher appeals dismissal of his lawsuit against archdiocese

Joshua Payne-Elliott, a foreign language and social studies teacher, sued the archdiocese after his contract with Cathedral was terminated in June 2019. 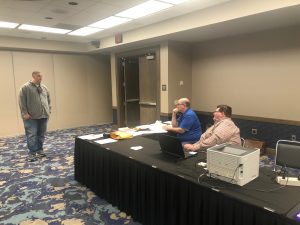 The city and organizers want the championship to be memorable for participating students, despite the disappointment of having to conduct the event virtually.

District leaders said the presentation Tuesday by a representative of Right to Life Michiana violated policies and procedures because the teacher did not seek the approval of the school principal and did not notify parents in advance.

The rate has declined in recent years and was even lower, 48%, for the winter 2020 bar exam.

House Enrolled Act 1384, authored by Cicero Republican Anthony Cook, mandates that a civics curriculum be developed and implemented into Indiana middle schools starting with the 2023-2024 academic year. The bill rode through the Statehouse collecting only one no vote and was signed into law April 8 by Gov. Eric Holcomb.

In a one-page order, Marion Superior Special Judge Lance Hamner did what a previous special judge and the Indiana Supreme Court had not done – dismiss the wrongful termination lawsuit filed by a gay teacher against the archdiocese of Indianapolis.

The graduating law school classes of 2021 are participating this month in commencement ceremonies across the Hoosier state that began over the weekend with a virtual ceremony.

A Fort Wayne businessman who was a top official in former Gov. Mike Pence’s administration is getting an early jump on running for governor in the 2024 election.