The Indiana Tax Court has affirmed an Indiana Board of Tax Review’s final determination that a Madison County nonprofit military museum does not qualify for an educational purposes exemption, though the court did find a charitable exemption is applicable.

The Marion County Assessor has lost a second attempt to dismiss Rolls-Royce’s appeal of its property tax assessments over a period of several years for a near-southwest side Indianapolis plant.

An objection to an Indianapolis business center’s voluntary withdrawal of its property tax appeal was not improperly overruled, the Indiana Tax Court ruled Monday.

Arguments about who has jurisdiction in an Indiana riverboat casino case ended Thursday with a ruling that the Indiana Tax Court has retained jurisdiction over the case.

The Indiana Tax court has reversed a decision that cut a Northern Indiana public library’s funding after it was found to be $60 over budget for the 2018 tax year. The tax court ruled the Department of Local Government Finance abused its discretion in its decision.

Capitalization rates determined by the Indiana Board of Tax Review for an Anderson shopping center were found to be improper by the Indiana Tax Court and were thus reversed Wednesday.

New lawyers advised they cannot achieve success by themselves

As the newest group of Indiana attorneys raised their right hands and took their admission oaths Tuesday, they were reminded that just as they needed to achieve this success, they will continue through their careers to need a little help from their friends. The 120 individuals who passed the February 2019 Indiana Bar Exam were admitted to the Indiana Supreme Court as well as the Northern and Southern Indiana District Courts.

Anderson Wigwam high school basketball arena owners have lost their appeal of a final determination upholding the assessment of its real property for the 2015 tax year at more than $2 million.

The Indiana Tax Court affirmed an Indiana Board of Tax Review’s determination that evidence presented to reduce a property’s assessment of improvements was not probative of the property’s 2016 market value-in-use.

At the end of 2016, there were 101 cases still pending before the Indiana Tax Court, the lowest number pending on Dec. 31 since Judge Martha Wentworth ascended to the bench in 2011. But by the end of 2017, that number had fallen to just 17 pending cases — an 83 percent decrease.

The Indiana Department of State Revenue must reimburse an Indianapolis insurance company the full amount of use tax it paid in Texas after the Indiana Tax Court ruled Friday that the tax the company paid in Texas qualifies for a credit under Indiana statute.

In a case involving the same litigants, attorneys and issues previously raised by the Monroe County assessor and CVS corporation, the Indiana Tax Court has affirmed the Indiana Board of Tax Review’s final determination as to the assessed value of a CVS store in Bloomington.

The Indiana Tax Court will return to Bloomington this week to hear another case involving the Monroe County Assessor and the CVS Corporation.

An Indiana food storage warehouse must pay sales tax on electricity and freezer equipment it purchased because such purchases are not used in the production of new, marketable goods, Indiana Tax Court Judge Martha Wentworth ruled Wednesday.

The Indiana Tax Court found Wednesday that an Illinois corporation that processes scrap steel is entitled to two exemptions under Indiana Code related to its sales and use taxes owed.

The Indiana Tax Court found a utility’s nontaxable connection fees were separated from taxable receipts on its returns and were therefore not subject to Indiana’s utility receipt tax.

Nick Popovich’s ongoing saga with the Indiana Tax Court continued Thursday as he again won a partial victory against the Indiana Department of State Revenue. 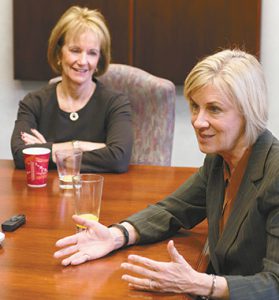 The changing face of the judiciary

When Loretta Rush was named chief justice of the Indiana Supreme Court in August, Indiana hit a milestone. For the first time, all of our state’s appellate courts were being led by women. Indiana Lawyer recently invited Indiana Chief Justice Loretta Rush, Indiana Court of Appeals Chief Judge Nancy Vaidik, Indiana Tax Judge Martha Wentworth and Chief Judge Robyn Moberly of the U.S. District Court for the Southern District of Indiana’s Bankruptcy Court to discuss their career paths as well as the opportunities and challenges today’s courts and lawyers face.