Every summer, an attorney-authored review analyzes and highlights the Indiana Supreme Court’s activity during the past
year.

But only rarely does that report come at a time when the state’s highest court is seeing change, resulting in what
could be a re-examination of how attorneys advise their clients and reflect on the court’s activity for their practices.

History is in the making, based not only on an annual review of the court’s activity for 2009 but what has transpired
in recent months. Justice Theodore Boehm announced in May his plans to retire in September, meaning that this report analyzes
his final full year with the court and symbolizes what his departure might mean for the entire state’s legal community. 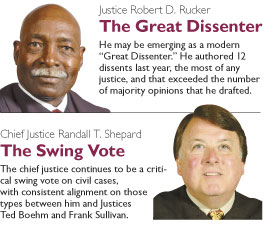 Indianapolis attorneys P. Jason Stephenson and Mark Crandley, who are partners at
Barnes & Thornburg, have compiled the report for the past six years. Associates Jeanine Kerridge and Jeff Peabody assisted
with the review, which is the 19th time the report’s been compiled since Indianapolis attorney Kevin Betz started it
in 1991.

The 2009 annual review shows some new surprises along with continued old trends.

This year brought little change in the overall docket for the Indiana Supreme Court, Stephenson and Crandley found.
Like the year before, 2009 saw a drop in the number of transfer requests after what had been steady growth in past years.
That number dropped to 795 from the 858 in 2008, proving that it wasn’t a fluke and the justices were indeed receiving
fewer requests from attorneys. As a result, the court granted only 8.4 percent of the cases rather than the 11 percent in
2008, but more than in the years before that.

As with last year, Stephenson and Crandley wondered if the economy played any part in the decrease in cases being brought
before the court.

“Given the decline in petitions for transfer, it bears watching whether that change continues to affect the percentage
of cases in which the Court grants transfer,” the report states.

Still, despite that drop, the number of rulings from justices stayed pretty much the same – at 97 opinions in 2009
versus 96 a year before. Stephenson and Crandley expect the court will likely hand down about 100 opinions in a given year,
which is interestingly more than the U.S. Supreme Court, which hands down fewer than 80 per year despite having four more
justices and additional resources.

“That is the most surprising change this year,” Stephenson said. “Civil cases are nearly all discretionary
transfers, so there is an expectation that a grant of transfer means that some part of the appealed decision will be reversed.
It is true that the number of civil cases means that a few opinions can result in a significant swing, but this is still a
significant departure. I have always told clients that acceptance of transfer virtually assures a change to the appealed order,
but this statistic will cause me to be more cautious in commenting on the impact of a grant of transfer. If the trend is also
apparent (for 2010), attorneys will need to be much more cautious about whether the implications of a grant of transfer mean
an order will be reversed in some detail.”

As far as the justices’ productivity, Justice Boehm authored the most opinions at 23, which amounted to 24 percent
of all the opinions and included four concurrences and the second-most dissents at eight.

INDIANA LAWYER EXTRA
For a closer look at the judicial statistics, click here.

Whether that amount of work had any connection with Justice Boehm’s retirement is not something that Stephenson or
Crandley addressed in their report, though, but it certainly plays into the overall impact of what happened last year.

“Only a law journal article of far broader scope could begin to evaluate Justice Boehm’s substantive contribution
to the Court and the development of Indiana law,” the report says. “His scholarly opinions impacted Indiana law
on an incredible breadth of topics with clarity, insight, and flashes of an underappreciated wit uncommon in judicial opinions.”

One aspect of his legacy that can’t be ignored is the sheer volume of work he produces, Stephenson and Crandley said.
He has authored the most or second most opinions of any justice in the each of the past five years, and at the same time he’s
handed down about a quarter of all the opinions.

“Although it is easy to focus on his artful opinions and the quality of his analysis, Justice Boehm’s prodigious
body of work certainly has contributed to his legacy on the Court,” the report says.

The percentage of unanimous opinions continued to wane, with 63.4 percent having total agreement. That’s up
slightly from the year before, which was the lowest amount of agreement since 2003 when they only agreed 61 percent of the
time.

Split decisions dropped to 19 percent after a spike the year before in 2008, but the percentage is still higher than in prior
years. For the first time in more than five years the justices issued more criminal case dissents than civil.

The attorneys believe those numbers indicate either that the justices are less likely to agree in those criminal or more
complicated cases that come before them, or that the justices are understandably more inclined to use their limited time and
resources to flesh out written dissenting opinions than they would be for opinions in which they at least concur in result.

With voting trends, the justices don’t line up ideologically like other jurisdictions’ Supreme Court, the attorneys
wrote.

Chief Justice Shepard continues to be a critical swing vote on civil cases, Stephenson and Crandley found. The report found
consistent alignment on those types between him and Justices Boehm and Frank Sullivan, with 86.4 percent and 81.4 percent
respectively. Justices Robert Rucker and Brent Dickson were the second most aligned last year at 85 percent, losing only the
chief justice’s alignment to become the majority.

Overall, Chief Justice Shepard and Justice Sullivan continued a trend of being the only pair of justices who agreed in more
than 80 percent of all cases. The lowest level of agreement came between Justices Sullivan and Rucker, with 75 percent on
all cases.

Combining those voting patterns with the dissent activity, Stephenson and Crandley point out that more historical
trends and changes could be coming to the court for the future years.

For example, Justice Rucker’s trend of being the most noticeable dissenter could be catapulting him to the ranks of
being dubbed a “modern Great Dissenter” that the state court typically hasn’t seen. He authored 12 dissents
last year, the most of any justice, and that exceeded the number of majority opinions that he drafted – happening only
once in the past decade he’s been on the bench when he did it in 2003. By contrast, every other justice wrote more than
double the number of majority opinions than their dissents last year.

With Justice Boehm’s departure, that dissenting voice of Justice Rucker takes on new significance and could impact
how the court decides in the future, Stephenson said.

“While it is outside the scope of this article to address the merits of his dissenting opinions and their impacts on
the development of Indiana law, the sheer persistence of Justice Rucker as a dissenting voice on the court has some practical
consequences,” the report says, noting that his dissents can impact everything from how many opinions the justices’
author to the voting alignments and how a case turns out.

The new justice will likely frame how significant Justice Rucker’s role as a dissenter becomes and could make him the
swing vote, Stephenson said.

Overall, the report authors say that predicting 2010 is especially difficult this year with Justice Boehm stepping down.

“Writing this article in prior years has demonstrated to me the consistency with this court, and that continues,”
he said. “But the differing views on legal issues manifest in growing dissents and split opinions means that Justice
Boehm’s replacement could have a significant impact on the court.  Will the new justice fit in with the traditional
majority bloc of Chief Justice Shepard and Justice Sullivan or will we see new voting blocs?  Only next year’s
statistics will tell make clear whether a major shift in the court is upon us.”•