“Disappointed,” “stunned” and “saddened” were just a few of the words former and current Indiana appellate justices and judges used to describe how they felt about the recent leak in the nation’s highest court.

In the legal brawl between Gov. Eric Holcomb and the Indiana General Assembly over who has the power to call the Statehouse into a special session, the Marion Superior Court will first have to determine which lawyers are actually representing the executive branch.

Attorney General Todd Rokita’s move to insert himself into the dispute between Gov. Eric Holcomb and the Indiana General Assembly over executive power is being challenged by members of the legal profession who see the state’s top lawyer as violating his oath and overstepping his authority.

The Indiana Senate has passed legislation that would give lawmakers the power to convene at any time during a statewide public emergency and more oversight over federal stimulus dollars.

Are you anxious to reconnect with your community? Are you looking for opportunities to contribute to Indy’s growth? Ready to network with community leaders and your peers? The IndyBar’s reimagined Bar Leader Series could be your answer and is now accepting applications for Class XVIII.

Holcomb administration disagrees with lawmakers on how to handle emergency powers

Indiana lawmakers on Thursday listened to four hours of testimony on how the governor’s powers should — or should not — be restricted during public emergencies and whether or not the approach they are taking is constitutional.

Indiana lawmakers have advanced bills that would curb a governor’s authority to impose emergency restrictions such as mask rules and business closures, although Republican Gov. Eric Holcomb and a former state Supreme Court justice, among others, question whether those proposals written by members of Holcomb’s own party are allowed under the state Constitution.

Members of the bench and bar gathered virtually for the official installation of the boards of directors of the Indianapolis Bar Association and Foundation on Thursday, Jan. 14. 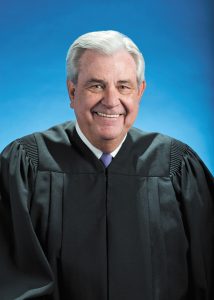 Friends and colleagues are celebrating the life and legacy of the late Judge Michael Barnes, who served nearly 20 years on the Indiana Court of Appeals after an earlier 20 years serving as the prosecutor of St. Joseph County. “He was a great friend. … He was a friend to all of us,” one colleague said.

As commencement nears for Hoosier students across the state, four speakers are preparing to address the law school classes of 2019.

Members of Indiana’s legal community who have worked with now-retired Indiana Supreme Court Justice Robert Rucker gathered in Indianapolis Wednesday to celebrate the impact the long-time jurist had on the practice of law in Indiana during his quarter-century career on the appellate bench.

The Indiana University Robert H. McKinney School of Law will celebrate now-retired Indiana Supreme Court Justice Robert Rucker’s legacy in the Indiana judiciary during a special program at the law school next week.

Former justice to speak about career at McKinney lecture

Former Indiana Justice Frank Sullivan Jr., now a professor at Indiana University Robert H. McKinney School of Law, will reflect on his experiences while on the Indiana Supreme Court at a Jan. 30 lecture at the law school.

The Indiana Judicial Nominating Commission has selected the three finalists for the Supreme Court vacancy: Hamilton Superior Judge Steve Nation, Tippecanoe Superior Judge Loretta Rush, and attorney Geoffrey Slaughter. The commission had whittled down the number of applicants from 22 to 10 in July, and then to three Wednesday evening.

The Indiana Judicial Nominating Commissions has finished interviewing the semifinalists who want to replace Frank Sullivan Jr. on the Supreme Court. The commission went into executive session around 4 p.m. Wednesday.

The Indiana Judicial Nominating Commission Wednesday interviewed 10 semifinalists to fill the vacancy on the Indiana Supreme Court created by the retirement of Justice Frank Sullivan Jr. Commission chair and Supreme Court Chief Justice Brent Dickson opened the interviews by asking each candidate what factors he or she believed the commission should be looking for in a justice.