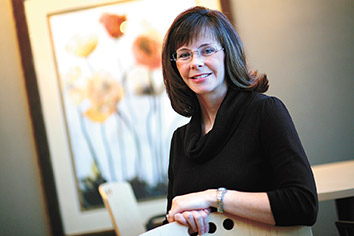 After spending 12 years in the health-care field as an X-ray technician, an in-house counsel for a hospital network in Indianapolis seems to be in the right place.

Shelley Fraser has been at Community Health Network for almost two years after hearing about the job from a neighbor of someone who worked in Community’s legal department. At that time, she’d been working for the firm now known as Taft Stettinius & Hollister for about five years, where she practiced health-care law.

Her main interest in going to law school was to practice something in the field of health care, so she enjoyed that job where she had experience with transactional and regulatory work in the health-care field.

But she was also excited for a new opportunity and ready for a change where she could focus on just one client. She also saw potential of being able to spend more time with her family – she was pregnant at the time – and spend less time worrying about billable hours and business development. She added this doesn’t mean she has any less work – if anything she might have more work – but it’s also faster paced and more focused because she only has the one client.

Today, as assistant general counsel to Community Health Network, she splits her time between an office at Community Hospital East and another office at Visionary Enterprises Inc.

“VEI is essentially the innovative development arm of the network – it owns and manages numerous ambulatory surgery centers, manages physician practices, and owns and manages real estate in addition to many other business ventures,” she said.

Each of those offices also has a member of the legal department who is there full time – Karen Ann Lloyd is at Community Hospital East, and Karen Turner is at VEI. The three of them oversee the legal issues of the network that includes 11,000 employees around central Indiana. She also said the three attorneys work well together, and she never feels isolated.

“It’s more of a team environment,” she said. “We don’t collaborate on everything, but we always support each other.”

There are five hospitals, plus more than 90 sites of care, which have a wide range of legal issues, she said.

In her role, she continues to work on transactional and regulatory compliance, but she and other general counsels also address tax, employment, mental health issues, and even criminal questions. She said the work is diverse and no two days are ever alike.

While she doesn’t often use her clinical background in her day-to-day work, she said it does help her understand how a hospital works, including the importance of focusing on the needs of patients.

She also said as a member of the risk-management team for the hospital network, even though things have changed since she was in the field, when she works with nurses she at least has an understanding of what they do because of her background.

While it doesn’t happen every day, from time to time she is able to affect patients’ lives directly – something she misses from her time as an X-ray technician. This usually only happens when she receives a call from the intensive care unit regarding a patient who is incapacitated and a decision needs to be made about the patient’s treatment, even if there’s no clearly defined person who can speak on behalf of the patient.

They’re never easy choices to make, she said. She can tell the physician the ethical or legal ways to handle the situation, but there isn’t always a clear answer one way or the other.

She has also learned about mental-health legal issues as the network has a number of patients with these concerns. For instance, the legal aspects of the commitment process, such as when someone can be constrained; what happens if the person needs medication but cannot give consent and who can give that consent; guardianship and power of attorney issues; the network’s role in cases involving child protective services and adult protective services; when mental-health records can be released; what records can be released when it comes to alcohol and substance abuse; duty to warn issues when it comes to issues like HIV reporting; and what can or can’t be shared in therapy sessions involving support groups.

While most of the physicians and others in the network have seen a lot of these firsthand and know many of the answers themselves, she said, “They already know the easy answers. By the time the question gets to me, there’s some kind of twist to it that’s unusual from what they usually see.”

She said among the issues she’s seen, some of the harder ones to address involve forced medication and consent issues, including controversial procedures or even when the issue of patient sterilization arises.

The hospital network has also worked with court programs. While those programs run on their own, she said the legal department has reviewed some of the forms to make them in compliance with what can and can’t be disclosed to the court regarding mental-health issues.

She added a number of people who work for the hospital have been there 20 or 30 years, and can also provide institutional knowledge when needed. Or when changes need to take place – as they have under health-care reform over the past couple years since Fraser started – others in the hospital can serve as a good reference when it comes to what has or hasn’t worked in the past.

“As the health-care industry is being revamped and redesigned, it’s a great opportunity to improve processes,” she said. “Our goal is to have better patient care and better access, and we’re analyzing how to make those changes over the next couple years.”

Among those changes are how to make records more high tech and in compliance with the Health Insurance Portability and Accountability Act, but because the hospital network is already connected, one concern is if the requirements are somehow different from what the network already does.

Fraser remains in touch with her mentor, Dave Bromund, a partner at Taft Stettinius & Hollister.

“Shelley was an important member of our health and life sciences group,” he said via e-mail. “We were sorry to see her move on, but understood that she was getting a great opportunity at Community. While she was here, she had a quiet confidence and maturity beyond her years in practice that clients loved. Some of that was due to her background in the health-care industry, but much of it was her great personality. She was a great problem-solver and saw issues from the client’s perspective. Again, this may be due, in part, to her prior industry experience. Her success and rapid progress to more significant and complex work came from her own hard work, solid critical thinking skills and good sense to ask the right questions.

“Shelley also showed her own initiative to get involved in the leadership of the American Bar Association’s task force on women’s issues,” he added. “She was passionate about helping women with breast cancer and focused her pro bono efforts on this cause.”•