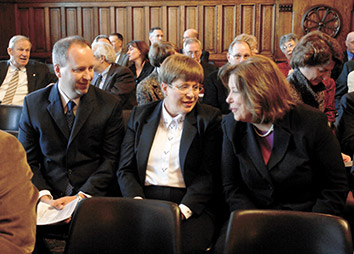 Long before law school and a legal career, Martha B. Wentworth owned a business and says her favorite part of that was paying her taxes.

That may be why it’s no wonder the lawyer who went to work at a multistate accounting firm where she heads up tax services has now become the state’s newest Tax Court judge. Wentworth is second person ever and the first woman to hold that appellate bench seat.

Gov. Mitch Daniels on Dec. 22 announced he had selected her as the state’s new Tax Court judge, succeeding outgoing Judge Thomas G. Fisher who retired at the end of 2010. Judge Fisher was the first judge named to that bench when it was created in 1986.

Wentworth holds this position for two years until voters decide whether to retain her. If retained, she’d serve a 10-year term.

A robing ceremony will likely be scheduled in early 2011, although a date has not been set.

“I am just truly honored, and this is pretty wondrous,” she said. “This is a pinnacle for someone who loves state taxation, and I’m just honored and humbled to be following in the footsteps of Judge Fisher. The personal joy I have is incalculable, and really the enormity of this, personally and professionally, is still sinking in. This is really a wonderful new adventure.”

Daniels credited her “decades-deep knowledge” of tax law and a strong reputation for fairness and consistency as reasons for choosing Wentworth, and he said she’d fill the role superbly.

Wentworth said she knew from the first day of law school that she wanted to be a tax lawyer, focusing primarily on federal taxation.

“I’d gone back to law school after having a business, so I’m a late-blooming attorney,” she said. “But the most fun I’d had was doing my taxes. I knew this is what I wanted to do.”

Though she would have become the first woman partner at the law firm, Wentworth in 1998 took what she describes as a huge risk and joined the multistate accounting firm Deloitte Tax LLP in Indianapolis.

“I love taking complex tax issues and making them simple, and it’s fun trying to break down so people can understand what so many are so afraid of,” Wentworth said. “This is just a wonderful and wonder-filled area.”

Though she hasn’t been able to actively practice law with her position at Deloitte, Wentworth has remained active in organizations such as the Indiana State Bar Association’s Tax Section and taught tax law through the years. She’s also taught graduate-level classes in state and local taxation at the Indiana University Kelley School of Business since 2000. 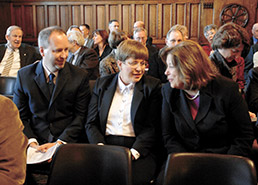 During her second interview with the Judicial Nominating Commission, Wentworth said the state faces so many intriguing and challenging legal questions on tax law, such as what is considered distortion on taxes, the amount of discretion the Department of Revenue has in allowing separate corporate entities to file separate or joint returns, and how the state agency can discretionarily change federal taxable income.

She said jobs are the most important issue for the state, especially in this economic climate, and tax law creates certainty for businesses that are trying to figure out what they can pay and who they can hire. The court must help shape a dynamic environment to encourage economic growth and job creation, she said.

“My goal is to maintain the tax court as a forum where devotion to the rule of law, fairness to all litigants, and professional civility are the benchmarks,” she said.

Reflecting on her appointment and the significance it has concerning diversity, Wentworth said she’s proud to offer more female representation on the state’s appellate bench.

“It’s great that we have women on the appellate bench; it’s imperative that we do. I’m glad to be able to join the others, but I don’t focus on that. My gender is not what I saw as a qualification or disqualification in this, but I am proud to be a role model.”

It appears that many in the Indiana legal community are praising the governor’s appointment and believe that Wentworth represents a good choice for the tax court.

“Most of the lawyers will be comfortable because we know she has much experience in this area,” said Barnes & Thornburg partner Larry Stroble, who heads up that firm’s taxation department and has been practicing in that appellate court since its creation. “When she steps in, she won’t have as much of a learning curve. Every judge will handle things a little differently, so everyone has to understand that Judge Wentworth won’t do things the same way as Judge Fisher. But I’m not worried about that at all.”•