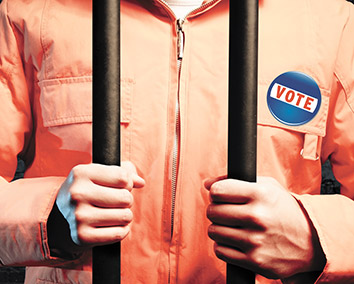 When a former town council member in northern Indiana was sentenced to county jail for two months on a misdemeanor battery conviction, he didn’t realize that experience would take away his right to vote.

But David Snyder’s misdemeanor conviction and incarceration led to the state striking his name from the voting rolls, and the South Bend man believes he was wrongly denied one of his fundamental constitutional rights.

What began as a class-action lawsuit in federal court has now been forwarded to the Indiana Supreme Court to review, asking whether the state Constitution’s use of the phrase “infamous crime” applies to criminal acts by any person convicted and put behind bars or if it only applies to felonies and serious offenses.

“This is a very interesting case historically,” said Indianapolis attorney Bill Groth, who represents Snyder. “One has to go back to these very old cases and decisions, and even the founding of the state Constitution and what our country’s founders envisioned for the federal Constitution, and parse the language of these ancient opinions and statutes. This case raises very important constitutional issues about what a citizen can be deprived of for certain crimes.”

In August, Snyder filed a suit in the Southern District of Indiana challenging the state statute and agency policies allowing for misdemeanants to be removed from the voting rolls once they are incarcerated. Snyder charges that state officials wrongly removed him from the statewide voter registration list because of a 2008 conviction for Class A misdemeanor battery that led to his incarceration between March and May 2009. He received a letter from St. Joseph County Clerk Rita Glenn that stated his voter registration was being cancelled immediately pursuant to Indiana Code 3-7-46. The notice also said that I.C. 3-7-13-4(a) and 3-7-46-1 and -2 allow for his removal from the statewide voter registry, along with the Indiana Election Division’s standard operating procedure VRG 12.1 that states anyone “imprisoned following a conviction of a crime is disfranchised during the person’s imprisonment.”

He didn’t see the notice immediately and as a result wasn’t able to vote when he showed up at the polls during the November 2009 election. Wanting to keep his standing so that any legal challenge wouldn’t be struck down as moot, Snyder didn’t re-register in order to vote in the May 2010 primary. He filed a written complaint with the Indiana Election Division and the county, exhausting what the lawsuit says is the available administrative grievance process.

That led to the federal class action suit, although early this year after being certified to the state justices both parties agreed that class status wouldn’t be pursued, Groth said. As a result, the number of individuals who could be impacted by this state statute and caselaw interpretation, as followed by the state for at least 15 years, has not been determined.

“This is narrowly focused and my client is standing on principle, and I’m glad he is willing to do that,” Groth said. “He never should have had to re-register in the first place. If he does, that would basically be conceding that the state was right in what it did.”

What happened to Snyder dates back at least to a statute passed by the Indiana General Assembly in 1995, which strips voting rights from people who commit “crimes,” but doesn’t distinguish between felonies and misdemeanors.

Most states prohibit convicted felons from voting for some period of time, but only Indiana and nine other states – along with Washington, D.C. – bar some or all people convicted of misdemeanors from voting, according to April 2010 research at the non-profit http://felonvoting.procon.org. The remaining 40 states allow individuals to vote by absentee ballot while behind bars, the data shows.

As a result of that patchwork of state laws, the issue of voting rights for convicts has been a national concern that many states have addressed through the years. Organizations like the Brennan Center for Justice have pushed for voting rights restoration nationwide, and some state legislatures have made reforms in recent years. Some have addressed the ability of a convict to vote, while others have made changes requiring judges to inform people of how convictions might impact their voting rights.

Applying some of those trends to Indiana, Groth said this Snyder case could present similar issues that might be of more interest for the practicing criminal bar and judges throughout the state. He said that some judges may not be advising misdemeanants about their right to appeal convictions, and this case could present an opportunity to alert them of that possibility; similar to how other states have taken action requiring judges or state officials to make convicts aware of these rights or what could happen to privileges such as voting.

That hasn’t surfaced in the briefing at this stage, Groth said, and neither have other issues such as whether a voting right removal might be considered “punitive” on top of a criminal sentence being imposed. For now, the case is focused on the narrow constitutional question, he said.

While Article 2, §8 of the Indiana Constitution permits the state to restrict voting of those convicted and imprisoned for any “infamous crime,” the suit explains that the Indiana appellate courts have defined that to be a felony. The Indiana Supreme Court ruled back in 1897 that felonies meet that definition, and Snyder’s attorney argues that a 1923 case further defined that crimes carrying a sentence of less than a specified term – such as misdemeanors – are not “infamous crimes.” The Indiana Rules of Evidence are also based on common law and also list crimes like murder, treason, rape, and robbery as bases for impeaching a witness, Groth argues. The Indiana Court of Appeals has more recently in the 1990s followed that precedent from the past century, holding what Groth contends to be findings that felonies such as making a pipe bomb or those where someone is imprisoned for at least a year fit the definition.

But in its brief filed with the state court March 8, the Indiana attorney general’s office made the opposite contention that caselaw supports misdemeanors being banned from voting while incarcerated. Citing a 1901 case, the state contends that the constitutional framers intended for the state Legislature to determine what “infamous crime” means and that a loss of certain civil rights, such as voting, would make a crime “infamous.” The Legislature isn’t limited by that phrase in what voting rights can be stripped, the AG’s brief says.

“It is obviously true that a person who is incarcerated in any facility, including a county jail, has lost his civil privileges and thus has committed an infamous crime,” the brief says. “Both history and case law show that the 1850 Convention delegates intended to continue permitting the legislature to disenfranchise, at the very least, all incarcerated persons.”

Briefing remains pending in this case and responses to those initial briefs are due by the end of March, with arguments set before the justices on April 21.•