A large animal skull sits on top of a bureau in the corner of Robert M. Baker III’s office. “That’s a replica of a saber-toothed tiger from the La Brea Tar Pits. I thought it fit – we were doing lots of litigation at the time,” Baker said wryly.

Baker, in-house counsel for the Indiana High School Athletic Association, has represented the non-profit organization in more than 100 lawsuits in more than half of Indiana’s counties and in the state’s federal District courts. He began representing IHSAA in 1988.

“Back in the ’80s, they were sued all the time,” Baker said. And his successful litigation of IHSAA cases led to his appointment as in-house counsel for the association in 2006. 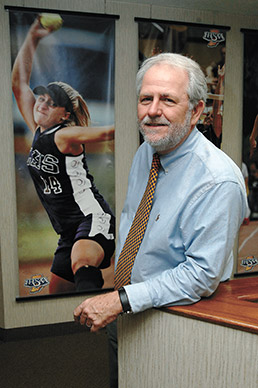 Baker had been a partner at four firms before joining the IHSAA, and he brought with him a broad background in business, commercial, and tort litigation. Blake Ress, who was IHSAA commissioner from 2000 until his retirement early this year, talked about how Baker’s extensive background was a great fit for the association’s needs.

“During my tenure as IHSAA commissioner, it was really important and invaluable to have legal counsel like Bob Baker whom you trusted and who had the institutional knowledge that can only be present after years of experience,” Ress said.

Nowadays, Baker spends less time in court than he did in the 1980s. He said lawsuits have decreased in the time he has represented the IHSAA, due in part to the creation of a case review panel. Before the 2000 Legislature ordered the creation of the CRP, students could appeal IHSAA rulings by either approaching the association’s in-house review committee or filing a lawsuit. The CRP, chaired by the superintendent of public instruction, hears appeals from students who are dissatisfied with the results of an IHSAA in-house hearing.

A decrease in court cases, however, does not mean less work for Baker, who also runs a solo practice from his IHSAA office.

He said he generally spends his day meeting with IHSAA executives and advising them about legal issues. He may be asked to review sponsorship agreements, draft contracts for new venues, or answer questions about IHSAA’s many rules, which he helped draft. The largest part of his work is devoted to enforcing IHSAA’s school-transfer policies.

Of the transfers they see each year, Baker explained that about a half to two-thirds are because a family has moved. But if the IHSAA determines the transfer was motivated by athletic reasons, the student may face limited eligibility – like being allowed to participate in only junior varsity sports. The policy is similar to one used by the National Collegiate Athletic Association.

“The protocol that the IHSAA uses is the same as the NCAA, only the NCAA isn’t able to enforce limited eligibility as the IHSAA does because there are no JV teams in the NCAA,” he said.

A small number of transfers – perhaps 10 to 15 per year – result in revoked athletic eligibility for one year at the new school, Baker said.

When a student transfers, the new school submits a transfer report to the IHSAA, where three assistant commissioners review the report and make a ruling on eligibility. If the family appeals the IHSAA’s decision, “That’s when I get involved,” he said.

One reason the IHSAA diligently tracks transfers is because the association wants to make sure students have their priorities in order.

“I mean, you go to school to get an education,” Baker said. “So if kids transfer for athletic reasons, they’re subordinating their education.”

The IHSAA also enforces transfer policies to ensure that no school is able to recruit the state’s best student athletes. “There are perennial good teams that students may want to play for,” he said.

Baker also is watchful for violations of other IHSAA rules. “The 8-semester rule – once you’ve gone eight semesters, you’re done. And once you become 19, you’re ineligible. We’d have 19-year-olds playing against 14-year-olds,” he said. “There’s a point where you have to say, ‘enough is enough.’”

He is also in charge of enforcing IHSAA’s intellectual property rights – like making sure photographers at IHSAA events have proper credentials and that amateur photographers aren’t snapping pictures and selling them for profit.

One commissioner oversees the 8,000 high school athletic officials in the state, and the commissioner may turn to Baker for advice. Baker also meets regularly with the IHSAA’s legislative lobbyist. “There is certain legislation that is directed at us,” he said.

Baker said he thinks the association’s reputation is improving.

“IHSAA used to be perceived as heavy-handed or autocratic,” he said. And part of that perception could have been because the plaintiffs in cases against the IHSAA are generally students.

“Anytime you are dealing with a young adult, there’s going to be an inclination for sympathy with their position,” he said.

This year, the IHSAA was a defendant in a case where plaintiffs alleged violation of Title IX rights. Title IX, enacted by the U.S. Department of Education in 1972, states, in part, that sports participation opportunities for male and female students should be substantially proportionate to their enrollment. The plaintiffs – who contend that scheduling girls basketball games on weeknights is discriminatory – voluntarily dropped IHSAA as a defendant. The case is now under consideration in the 7th Circuit Court of Appeals.

Schools are responsible for ensuring compliance with Title IX, Baker said. The IHSAA wrote a letter to its member schools about 10 years ago, he added, reminding them about the DOE guidelines regarding Title IX.

“There are constant challenges that the association goes through,” Baker said. “Right now, I don’t see anything that says, ‘Let’s brace ourselves for this.’”

The policies that Baker has helped create may protect the association from litigation. Its lightning policy, for example, lists guidelines stating when coaches, officials, or trainers should call off an event due to threat of a lightning strike. If those guidelines are not followed, the school is liable for any lightning-related injuries. Only during IHSAA tournaments would the association be held liable for injuries resulting from failure to follow its own guidelines.

Baker, 60, has two grown children who participated in high school sports. “I had two jocks – a boy jock, and a girl jock,” he said. The attorney does not put himself in the same category. “In high school, I did swim. I was also a sports editor … so, I wasn’t a jock.”

He coached baseball from the time his son was 4 years old (the age at which every child should begin playing baseball, he said). Even so, he downplayed his role, “I was more of an assistant coach,” he said.

When asked why he chose to become a lawyer, Baker paused a moment to reflect.

“I think it was the idea of going into a vocation where I could talk, and I truly enjoyed the intellectual challenges of it.” In the early 1970s, he said, “It made sense to continue educating myself,” rather than try to enter the job market.

Baker said he has always been interested in high school sports, and he appreciates that the IHSAA staff seems deeply committed to the work they do.

“Being general counsel and actually working here is one of the fun parts of practicing law. Working with these folks is a joy,” he said.•