Home » A century of Indiana lawyers 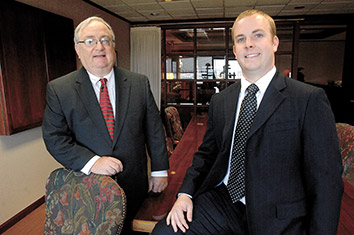 Patrick Myers Sullivan became one of the state’s newest attorneys this spring, and in doing so a fourth consecutive generation in his family entered the legal profession.

The 25-year-old Indianapolis lawyer follows in the footsteps of four other family members, including one Marion County judge and another who served on the Indiana Supreme Court in the mid-20th century.

On May 16, Sullivan joined 131 other new lawyers who were sworn in at the Indiana Supreme Court’s ornate courtroom inside the state capitol building in Indianapolis.

“As a parent, you’re always proud to see your children achieve,” said Patrick’s father and Indianapolis attorney John Sullivan with Montross Miller Muller Mendelson & Kennedy. “I never pushed him to become a lawyer, but it is a pretty proud moment to see him get through the rigors of law school and pass the bar exam to where he is now.”

Patrick’s grandfather Judge Joseph Norwood Myers Sr. was a past Indianapolis Bar Association president who served on the Marion County Municipal Court for more than three decades starting in 1952. He died in 2009.

Growing up in the family that he did, the young Sullivan says he had several role models to look up to in the legal profession. First, there’s his dad, John, who was admitted in 1976 and has been an influential member of the bar through the years. He has been with the same firm since the mid-1980s and helped pioneer the federal medical savings account legislation more than a decade ago. He’s been active in local and national politics, including his time on the Indiana Recount Commission in 1988, running several presidential campaigns in Indiana, and making an unsuccessful bid for Indianapolis mayor in 1983.

Then there are the past generations, donning the barrister tag with the Myers moniker that John Sullivan married into: Patrick’s grandfather is Judge Joseph Norwood Myers Sr., a past Indianapolis Bar Association president who served on the Marion County Municipal Court for more than three decades starting in 1952. He retired in the late 1980s and died in 2009 at the age of 93.

Patrick’s great-uncle Walter Myers Jr. started out as a deputy prosecutor in Marion County and was an attorney for the county board of sanitary commissioners before an unsuccessful bid for the Marion Superior and Circuit courts. He went on to become the Democrat choice for the Indiana Appellate Court in 1958 – these were the days before merit selection – and served until 1962 when he defeated Justice Arch N. Bobbitt for a spot on the state Supreme Court. He served as a justice until his death in 1967.

Patrick’s great-uncle Walter Myers Jr. started out as a deputy prosecutor in Marion County and municipal attorney before he was elected to the Indiana Appellate Court in 1958. He defeated Justice Arch N. Bobbitt on the Indiana Supreme Court in 1962, and served until his death in 1967.

Walter D. Myers Sr., Patrick’s great grandfather, was a prominent lawyer who practiced in Indianapolis for more than 60 years, being the first of the family admitted to the bar in this state after receiving an L.L.B. from Indiana University in 1907. He worked in multiple municipal roles before becoming speaker of the Indiana House in 1931 and special counsel to a U.S. Senate committee in 1936. In 1940, President Franklin D. Roosevelt appointed him as Fourth Assistant Postmaster General. He ran unsuccessfully for Indianapolis mayor in 1925 as an anti-Ku Klux Klan candidate and then in 1928 for the U.S. Senate. He also wrote a number of articles and law books including “‘The Guv’: A Tale of Midwest Law and Politics.”

“That all carries on to me, and shows the responsibility and fairness that has been a part of my family,” Patrick said. “My family set the bar really high on what I hoped to accomplish, and having that family legacy instilled upon me the belief that I could do it. Those role models were there to show me it was possible.”

Even with that family history, the law wasn’t always what Patrick saw as his career choice. When he was younger, he thought about getting into science or a related field. That evolved into business and pushed him to Georgetown University, where he earned his undergraduate degree in business administration.

His father says they didn’t discuss specifics of cases at home, but his son knew of some of the clients and legal issues his father was handling. Politics was always a big part of the family, as well, and Patrick said he took an interest in that and helped on political campaigns as he grew up.

“Four generations is a lot of lawyers and he’s been exposed to it all of his life, but I never directed him to be a lawyer and told Patrick and all my children they could do whatever they wanted and I’d support them,” the elder Sullivan said, pointing out that he has a daughter who’s a doctor doing a pediatric internship, another daughter pursuing a master’s in creative writing, and a son who’s a college junior studying economics.

But the family history helped mold his career choice as he got older, Patrick said. He grew up living only a few minutes from his grandfather, the Marion County judge, and had exposure to stories and that way of life. He recalls his grandfather telling stories about how things had changed with law school admissions and court procedures and having technology in the courtroom.

“As I got interested in society and the world around me, that concern for my fellow man and finding a skill set where I could help people is what mostly pushed me toward law school,” he said. “The advocacy that I saw through my family, particularly my dad and grandfather, was a major influence in my life.”

Patrick’s great grandfather Walter D. Myers Sr. practiced in Indianapolis for more than 60 years, starting in 1907 working as a municipal attorney before becoming speaker of the Indiana House in 1931. President Franklin D. Roosevelt in 1940 appointed him as Fourth Assistant Postmaster General.

That all led him back to Indiana University School of Law – Indianapolis, where he graduated in December 2010. He took and passed the bar exam in February.

Patrick is now working at the same law firm as his dad and doing general legal work – researching, drafting cases, and, most recently, assisting with a case before the Indiana Supreme Court. He hasn’t had any cases on his own yet, but he’s hoping that day comes soon and he is able to continue becoming familiar with the practice of law while learning from others at the firm.

One of the new lawyer’s most interesting recent legal experiences wasn’t even connected to his new law degree – it was being summoned for jury duty soon after being admitted to the state bar. He served on a criminal jury in Marion Superior Court and saw the real effect of the profession.

“It presented a new perspective of the courtroom process and how it’s all interpreted by non-lawyers, and I was able to take a step back and see everything from the other side. That kind of grounds you about what this law degree really means in the real world,” he said.

Patrick says his background in business could lead him to the corporate counsel side of the legal community. He is interested in being an attorney as part of a business where he can handle issues such as mergers, acquisitions, and anti-trust matters.

“Maybe I’ll look at an in-house or general counsel type of role, where I can be a part of the actual business decisions that are happening rather than just offering a retrospective legal analysis,” he said.

Still, the new lawyer hasn’t ruled out following in the judicial footsteps of his grandfather or great-uncle.

“That’s always a possibility. Being a judge would be a great career,” he said. “You never know.”•