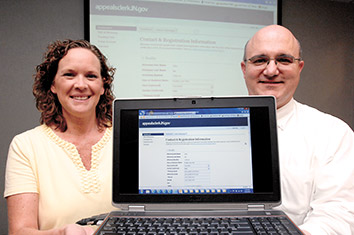 Entering the 21st century is no longer optional for Indiana lawyers. When it comes to attorney registration, paper forms are history to make way for a new web portal.

The Indiana Appellate Clerk’s Office unveiled a new site Aug. 1 that overhauls the way lawyers and judges pay their annual registration fee, manage trust accounts, designate surrogate attorneys, and update contact information. The new paperless system is the first step in a planned three-phase initiative. The change, which impacts every licensed lawyer in the state, will ultimately allow attorneys to pay for continuing legal education online. The new system will ease the legal community’s ability to navigate the Roll of Attorneys process and save the state judiciary time and money.

The court estimates that within two years, offerings will also include a revamped online docket that allows hyperlinks for certain court records and a free subscription tool to follow appeals based on judge, county, attorney, or even case type.

“This gives attorneys a much easer way both to do their annual registrations and certifications and to keep their Roll of Attorney contact information current throughout the year,” Appellate Clerk Kevin Smith said. “This impacts every attorney in the state, and I know from a clerk’s office perspective it will allow us to be much more efficient and make much better use of our limited resources.”

Until now, a pre-printed annual registration statement form was mailed to the 20,706 active and inactive attorneys inside and outside of Indiana, in accordance with Indiana Admission and Discipline Rule 2(g). The court rule requires the appellate clerk to send that notice Aug. 1 alerting attorneys about their upcoming dues deadline in two months, and anything more would be a courtesy. A graduated fine schedule begins if dues aren’t paid within 15 days, and a final notice about the non-compliance is sent at year’s end. Smith said the following spring, the clerk’s office notifies attorneys who haven’t paid their dues or completed annual CLE credits that they face license suspension if those obligations aren’t met, and the next notice an attorney would receive is from the Supreme Court ordering discipline for not paying dues or having the required CLE.

Coincidentally, attorneys’ annual registration fees are rising by $15 this year after the Indiana Supreme Court ordered that increase July 28. They are rising from $130 to $145, and there are corresponding changes in that amount to delinquency fees if the fees aren’t paid on time. The annual Continuing Legal Education fee will also rise from $30 to $45.

The order signed by Acting Chief Justice Steven H. David had concurrences from three of his colleagues on the bench, except for Justice Robert Rucker, who dissented to the registration fee increase.

Indiana has been tied with Maryland as being the least-expensive states in the country for annual registration fees, even after the 2010 increase that upped the amount from $115 to $130. Court spokeswoman Kathryn Dolan said this hike is not connected to the new online attorney registration portal and is coincidental. Annual fees pay for specific items such as CLE, Disciplinary Commission, and Judges and Lawyers Assistance Program services while the new registration docket is paid for through the court budget.

The new portal has been in development for the past year, but the concept has been years in the making, according to appellate IT chief Robert Rath who took that newly created position in 2009 and started exploring what ways the state’s court system and appellate clerk’s office could go paperless. They specifically began working on this paperless Roll of Attorneys a year ago, Rath said.

Attorneys will initially need to set up an individual account through the new portal at the clerk of courts website http://courts.IN.gov/cofc/. From there, they can navigate the prompts.

Starting Sept. 1, a delegation option will be available at the online portal allowing lawyers to designate administrative assistants, paralegals, bookkeepers, or others to access and change the information and make annual fee payments. This might be especially beneficial for large law firms, Smith said, where one person is often given that task on behalf of practicing attorneys in the firm.

Notifications will appear on the online portal alerting an attorney if he hasn’t paid his dues, and the system will also be able to send an email a few days before Oct. 1 as a reminder, Smith said. Specific figures aren’t kept on the number of attorneys who don’t pay by Oct. 1, but Smith estimated about 10 to 15 percent receive those letters following the first deadline.

“The hope is that it will result in attorneys being able to go online at any time to do this and they won’t wait or forget as might happen if they had to mail something in to us,” he said.

All future annual notices will be sent to the email address provided for the Roll of Attorneys, and the clerk’s office says attorneys should make sure spam filters are set to allow for any emails with the domain @courts.IN.gov.

Smith said this would save the state courts money far beyond the $11,180 spent annually on mailing and printing costs. Staff time that would otherwise be devoted to mailing and receiving forms, reviewing documents, inserting that information into the system, and specific contact with lawyers because of that paper-based method will be reduced.

The new portal will likely lead to much more efficiency in the appellate clerk’s office, and updates will be instantaneous rather than having to wait for someone to update that information by hand, Smith said.

This change comes at a time when many states are moving to a paperless system for discovery, filing, or both. All federal courts require e-filing and have a comprehensive pay-for docket system online, and more than half the states have made initial progress toward enabling those similar options for the practicing bar and general public.

Indiana hasn’t made the move to e-filing at this point, nearly four years after the Indiana Supreme Court withdrew an amendment it had made in September 2007 requiring all appellate briefs and court documents to be filed electronically starting January 2008. But within a month of making that change, the justices issued a second order striking the change to Appellate Rule 43(K) and saying it had been “inadvertently included” in the earlier order.

Nothing has happened on that appellate e-filing topic since then, even though Rath came on board about two years ago to focus on that and related IT issues.

But by the middle of 2012, Rath says the state will strengthen the online docket to include hyperlinks for appellate decisions and certain court records, such as attorney disciplinary decisions or case-specific orders and special judge assignments. The clerk’s office won’t be able to include that access retroactively.

Eventually, the vision is for attorneys and appellate judges to be able to read all case documents on a laptop in court rather than having to flip through pages of paper, and that Indiana’s appellate courts will have a way to tie into the statewide Odyssey system.

The Indiana General Assembly didn’t provide any additional funding during the 2011 budget session for an Appellate Case Management System – a project that Rath has been exploring since he took the job – but this new three-phase online upgrade for the clerk’s office is putting some of those smaller pieces in place.

Many Indiana attorneys welcome this new online access for registration and lawyer-specific information and are looking forward to the grander e-system implementation.

Indianapolis attorney Brian Paul with Ice Miller, who’s served on an appellate court e-filing committee, says the entire legal community should welcome e-filing because it will make the system more efficient and save judges and lawyers time, as well as save litigants money.

“It’s important that non-lawyers have ready, inexpensive access to court documents; they deserve to know how their courts are being used and operated,” he said. “The fact is the switch to electronic filing and docketing is inevitable.  We might as well embrace the technology now.”•