In October, the Indiana Bar Foundation’s board of directors approved allocating $487,205 from its reserves to fund the state’s pro bono districts in 2012. The foundation distributes funds to the districts from interest on lawyer trust accounts, and those funds have been diminishing since 2009.

At the end of this year, a little less than $1 million will be left in reserves.

“The difficult and philosophical question is how much of the reserve do you use?” said Charles Dunlap, the foundation’s executive director. “You don’t want to run out, but you don’t want pro bono districts to run out of money in the short-term.”

Tough times all around

Other legal services for the poor are struggling with budget woes, too. Indiana Legal Services had already weathered a round of budget cuts this year after Washington lawmakers voted to reduce funding to the Legal Services Corp., which funds ILS and other legal aid organizations around the country.

With more than 75 percent of its budget dedicated to personnel costs, Metzger said job cuts are inevitable, although he knows that some offices are already understaffed due to existing budget constraints. While it’s up to the ILS board to decide, he predicts that some of its $1 million reserve will have to be allocated to help struggling legal aid organizations.

“We aren’t going to be carrying a million dollar reserve into 2013 – the board could decide that, but I would be surprised,” Metzger said.

According to LSC statute, its board of directors must reallocate funding based on the decennial Census poverty count in each state or service area, Metzger explained. But unlike the previous 40 years, the Census Bureau in 2010 didn’t do a poverty population count.

“They wanted to go to the short form and they eliminated a lot of questions, and one of the questions they eliminated was about income. So now LSC is dealing with the Census Bureau to come up with poverty estimates,” he said.

Funding was a popular topic of conversation at the National Legal Aid & Defender Association annual conference and Centennial Celebration in Washington D.C. Dec. 7-10. Metzger, who attended, said legal aid providers across the country are struggling with waning budgets. In one session, attendees learned about possible outcomes of the upcoming LSC funds reallocation. And he said that ILS could see a measurable increase in funding, but any increase wouldn’t be realized until 2013.

LSC will look at small area income and poverty estimates and the American Community Survey to determine which parts of the country have the most need. 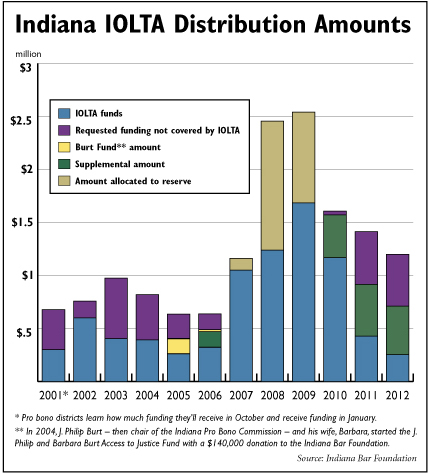 “Louisiana, their poverty population is way down – it’s about 500,000 or 600,000 less in Louisiana in 2010 than in the year 2000, and the reason for that is Hurricane Katrina. A lot of the people that left were poor people,” Metzger said. He said in that same time frame, Indiana’s poverty population has increased 28.4 percent. “So Louisiana may be cut by 30 percent, and Indiana would get a 20-percent increase.”

Metzger said he would hesitate to call that good news for Indiana, because any increase in funding would simply be a reflection of greater poverty levels. He also said that anticipating an increase in LSC funding might be a gamble.

“So the question is: how do we go about planning?” he said.

Richmond’s District 9 will become part of District 8 – Legal Volunteers of Southeast Indiana. Currently, Richmond has a part-time plan administrator, and Dunlap said how staffing may change was still being discussed.

Monica Fennell, executive director of the Indiana Pro Bono Commission, said she hoped realignment would not have a negative impact on services and that each district has a great amount of autonomy in determining its priorities from year to year.

But what Fennell and Dunlap cannot predict is when IOLTA interest rates will rebound.

“The bottom line is, we’re in the third year of close to a zero interest rate nationally,” Dunlap said. “The open question is: how long is the interest rate environment going to be like this?”

“It’s not just LSC, it’s not just IOLTA … it’s other funding, like United Way is down,” Metzger said. He said that ILS had seven grants from different United Way offices. Four of those are down, and one was eliminated.

Scott Wylie, plan administrator for the VLP of Southwestern Indiana, said that pro bono resources are increasingly challenged to meet the needs of the public.

“I think it’s a situation that’s affecting every county in Indiana, and that is we will have fewer resources to cover a greater number of people. So it’s going to mean that fewer people are going to be linked to pro bono assistance – it’s just a sad reality,” Wylie said.

Metzger is concerned not only about legal services for the poor in Indiana, but nationwide.

The ILS board of directors has a meeting scheduled for Dec. 22, at which time they will begin looking at ways to cope with the budget reduction.

“It’s hard to have a joyous holiday spirit knowing that we’re going to be laying off people,” Metzger said.•