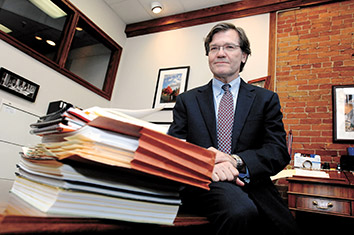 Thirty-one Indianapolis property owners who paid as much as 30 times more than their neighbors for sewer service got resolution from the U.S. Supreme Court in their lawsuit against the city. They lost.

“It hurts,” said Christine Armour, who by virtue of the alphabet is the first and namesake plaintiff in Armour v. City of Indianapolis, No. 11-161. “It’s a total injustice. I just can’t see how they could make a judgment like that.”

The judgment was the U.S. Supreme Court’s 6-3 ruling in favor of Indianapolis, a ruling that upheld a divided Indiana Supreme Court.

The plaintiffs each paid the full $9,278 to have sewers installed in the Brisbane/Manning neighborhood in northwest Indianapolis. The city used Indiana’s Barrett Law to finance the sewer hookups, apportioning the cost equally among property owners, who could pay in full or in installments.

The suit arose when Indianapolis stopped using Barrett Law and forgave future payments. Those who paid in full wanted refunds; the city refused. Some property owners whose debt was forgiven had paid little more than $300.

Ronald J. Waicukauski, an attorney with Price Waicukauski & Riley in Indianapolis, sued the city on the property owners’ behalf under the federal Equal Protection Clause. He litigated the case until Washington, D.C., attorney Mark Stancil argued before the U.S. Supreme Court.

But attorneys for the city said the court decided correctly on equal protection and giving deference to governmental lawmaking powers.

Finding for the city

The majority agreed with the city that granting refunds would create an administrative hardship and that its decision to forgive Barrett Law payments met a key test.

“The City’s administrative concerns are sufficient to show a rational basis for its distinction. Petitioners propose other forgiveness systems that they argue are superior to the City’s system, but the Constitution only requires that the line actually drawn by the City be rational,” Breyer wrote.

“State law says nothing about forgiveness … To adopt petitioners’ view would risk transforming ordinary violations of ordinary state tax law into violations of the Federal Constitution,” the majority opinion said.

Indianapolis Chief Litigation Counsel Alexander Will said in an email, “We believe the Supreme Court’s opinion is simply an affirmation of existing equal protection jurisprudence. Otherwise, this case must be remanded for determination of the state claims, and the companion case is still pending in the U.S. District Court.”

Will said the city contracted and paid about $200,000 to the firm of high-powered Washington, D.C., attorney Paul Clement, who argued the city’s case before the justices.

“Without commenting on the pending litigation,” Will said, “the Supreme Court’s decision affirms … that administrative burdens and costs can be a rational basis for government decision making.”

The companion case Will refers to involves about 1,400 plaintiffs in a class action against the city seeking about $2.8 million in refunds. William Rosenbaum represents those clients in Owen & Evelyn Cox v. City of Indianapolis, et al., No. 1:09-CV-435. That suit includes property owners who paid varying amounts in numerous Barrett Law projects. The suit contests the city policy that forgave Barrett Law payments and also claims equal protection violations for those who paid more than others who received the same benefit.

Rosenbaum said the federal court had granted summary judgment in favor of the plaintiffs on the equal protection argument. “That obviously goes away as a result of the decision of the U.S. Supreme Court in the Armour case,” he said.

Cox v. Indianapolis remains before Judge Tanya Walton Pratt in the U.S. District Court for the Southern District of Indiana. A determination is pending on a request to reconsider dismissal of the portion of the case arguing violations of state Barrett Law.

Rosenbaum said the high court’s Armour ruling was disappointing. “It’s hard to imagine a set of facts that would come before the Supreme Court that would be a stronger call for the exercise of the Equal Protection Clause for individual taxpayers,” he said.

But Faegre Baker Daniels partner Jon Laramore said units of government also had much riding on the case.

“Armour is a helpful decision for local governments,” Laramore said. “It specifically clarifies that administrative convenience will in most cases be sufficient to justify government programmatic decisions. That justification will not raise any equal protection problems.”

With Faegre partner Scott Chinn, Laramore wrote an amicus brief in support of the city on behalf of the International City/County Management Association, National Association of Counties, National Conference of State Legislatures, National League of Cities, and the United States Conference of Mayors.

“Armour was a case of national interest because it seemed likely that the court would make law regarding how equal protection applies when there is a significant change in government policy,” he said. The decision probably puts to rest equal protection claims that could arise, for instance, when a government unit changes fee structures or sweeps streets more in one area than another.

“We have never before held that administrative burdens justify grossly disparate tax treatment of those the State has provided should be treated alike,” Roberts wrote. “Every generation or so a case comes along when this Court needs to say enough is enough, if the Equal Protection Clause is to retain any force in this context. … The equal protection violation is plain.”

“To the extent a ruling for petitioners would require issuing refunds to others who overpaid under the Barrett Law, I think the city workers are up to the task,” he wrote. “…What the city employees would need to do, therefore, is cut the checks and mail them out.”

Plaintiff Bill Main said the ruling was crushing to those expecting a different outcome based on the tenor of oral arguments.

“You had to take it, but it was hard to understand,” Main said. “The courts had a chance to correct what we thought was a gross injustice, and they didn’t do it.”

Despite the outcome, Waicukauski hopes the suit will discourage unfair treatment in the future by government entities.

“I think it’s important to understand that the Supreme Court didn’t say what the city did was right or fair,” he said. “They just said, ‘we’re not going to use the Equal Protection Clause to overturn the state Supreme Court.’”

Main drew a different lesson: “What I learned from it is that you never pay the city up front. I’ve learned to be very suspicious of the city.”•