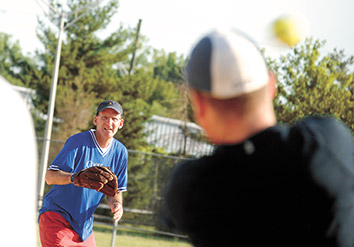 On a hot Thursday evening, pitcher Jeff Mendes tries to rally his team as they take on their seasoned opponents, the Pokers.

“All right, gentlemen, let’s go – let’s get some runs here,” Mendes says as his teammates enter the dugout for their turn at bat.

While the teams play for fun, it’s clear that the players take competition seriously.

Interest in the Lawyer League has waxed and waned over the years. In the 1980s, the league had more than 30 teams.

Brandon Ehrie, of Lewis Wagner, started playing in the league four years ago. A member of the Pokers – led by team manager Robert Ebbs of Glaser & Ebbs – Ehrie explained how today’s rosters are different than they used to be.

“The league was struggling a bit when I started; it’s my understanding that at one point, it was huge. There were a number of teams mainly broken up by firms … I think that it dwindled a bit, which is how we ended up with these potpourri teams,” he said.

Matt King manages the Frost Brown Todd Lone Wolfs, which has four women on the roster – a departure from the norm in the Lawyer League.

“We just open our team up to anybody at the firm, and we’ve always had pretty good participation from the females in our firm,” King said. While the Lone Wolfs have more women playing than any other team in the league, other female players do participate.

Frost Brown Todd LLC attorneys and employees account for about two-thirds of the roster, with the other third made up of lawyers or law students from outside the firm.

To prepare for the Lawyer League, the team participates in a spring non-lawyer softball league. And if you’d like a humorous look at the team’s progress, check out the Lone Wolfs Twitter handle – @lonewuffs – which King said was created by “somebody on our team who will remain nameless.”

The Lawyer League rules require that at least five “lawyers” – which includes lawyers, legal professionals, law students and recent law school graduates – be on the field at one time. Teams that cannot find enough “lawyers” to field a roster can fill out rosters with non-lawyers, although the rules state that “the non-lawyer shouldn’t be appreciably better than the rest of the team.”

The intent of that rule is to make sure there are no “ringers” – although King said, “everybody has a few; they’re just lawyer-ringers.”

Whether Ehrie – who played baseball, basketball and football in high school – is a ringer is up for debate. The same is true for Lewis Wagner LLP colleague Ryan Vershay, who played baseball growing up. Vershay plays for the Coots Henke & Wheeler team.

Games last one hour or seven innings. During game play, a batter who makes it to first base may call for a teammate “runner” to take his place.

A Coots Henke & Wheeler batter steps up to the plate and sends the ball low and far into the outfield. He ambitiously rounds first base, then second, and narrowly misses being tagged out before landing squarely on third base.

Serving as first-base coach, team manager Jim Wheeler turns to the other players in the dugout and says, “Let’s be careful, with nobody out.” Wheeler suggests a conservative approach – going for a safe double instead of a risky triple.

Throughout the game, the players for Coots Henke & Wheeler and the Pokers show the kind of quiet intensity and communication one would expect from full-time athletes. They shout encouragement to one another and demonstrate machine-like coordination in throwing the ball from the outfield to the infield and to home plate.

Vershay said playing softball offers a different, more relaxed setting in which to develop connections with other attorneys.

“(With) golf, you’re typically restricted to your four-man crew, and generally, it’s people you already know,” he said.

“It’s a different sort of dichotomy when you have an opportunity to be able to speak with your peers in a more informal context than the different social meet-and-greets through the IndyBar or the Indiana bar events. You get to see your peers in a little more light-hearted, fun and competitive atmosphere.”

Ebbs sees the Coots Henke & Wheeler team and The Mudsharks – last year’s playoff champion – as the Pokers’ chief rivals in the Lawyer League.

The Lone Wolfs consider the B8zims to be their rivals. And the Wolfs are a bit puzzled by that name.

“We’ve never been able to figure it out, we’ve asked the guys, and they won’t say,” King said.

The team’s goal is simple: “We always shoot for the judge’s team,” Deer said of Coots Henke & Wheeler’s squad. “We are 4-and-1 right now, so we are battling for the top spot.”

Marion Superior Judge Grant Hawkins refers to himself as “the guy in charge of making sure we have enough players” for the Coots Henke & Wheeler team. But he’s obviously much more than that in the eyes of his fellow softball enthusiasts. Hawkins has played in the Lawyer League continuously since he was a law student in 1973, and when he talks about the league, his passion for the game comes through in his voice.

Hawkins’ softball season doesn’t end in August. He keeps playing in a “fall-ball” league where he and Ehrie are on the same team and compete against non-lawyers.

“Fudge,” Mendes says, returning to the dugout after a tough inning. That’s about the saltiest language overheard in the game against the Pokers.

The players seem respectful of their opponents and officials, with plaintiff lawyers and defense attorneys peacefully coexisting on the diamond, having a good time.

“It’s just fun,” Hawkins said. “I think if you talk to the referees, they’ll say, ‘They’re lawyers, but they’re not jerks.’”•