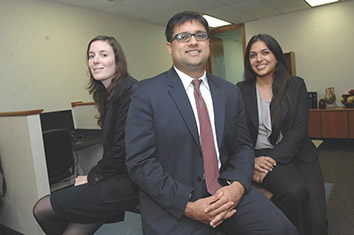 The cockroaches crawling around the apartment were not enough to force the landlord to break the lease agreement.

For any tenant, an insect infestation would be unbearable. But for the young man living there, the bugs, along with the loud noises and criminal mischief, were exacerbating his mental illness and pushing him toward the desperate act of fleeing.

His caseworkers at the Midtown Community Mental Health Center reached for a form letter, checked off the deplorable conditions of the living space, and demanded the apartment owner cancel the terms of the lease.

Before they sent it, the team from Midtown showed the letter to Abhishek “Jay” Chaudhary, and that, said social worker Lael Hill, made all the difference.

Chaudhary is an attorney at Indiana Legal Services who directs the Midtown/ILS Medical Legal Partnership. He helps navigate through the legal entanglements that can ensnare Midtown clients, all of whom struggle with severe mental illnesses like bipolar disorder, antisocial personality disorder, schizoaffective disorder, and most cope with symptoms of paranoia, depression and hallucinations.

Like the young man in the apartment, legal problems can add to the already overwhelming stress in their lives and make their mental health worse.

When he reviewed the letter, Chaudhary first rewrote it, softening the tone, and sent it to the building manager who rebuffed him. The young attorney then found the landlord’s name and wrote a letter to him, outlining the issues in the apartment that violated the federal Fair Housing Act.

Not only did the landlord consent to releasing the young man from the lease, he also disinfected the tenant’s personal items and delivered them to his new residence.

“Without the help of Jay, probably what would have happened is (the Midtown client) would have left and the landlord would have probably been pursuing a court case against him for rent,” Hill said.

As a result, she continued, the young man’s credit rating would have been ruined, and he likely would have had difficultly finding another place to live.

The Midtown/ILS Medical Legal Partnership began on a limited basis in 2009 and is believed to be one of a few mental health partnerships in the country. Chaudhary is credited with having the vision and the drive to enact the idea, find the funding and offer a much-need service to the mental health clinic.

A 2009 graduate of Indiana University Maurer School of Law, Chaudhary said he has always wanted to work in legal services and is “passionate about giving marginalized people a voice.”

Like the Midtown MLP, the Wishard partnership is aimed at improving patient health by providing legal advocacy.

Nearly three years after the Midtown MLP launched, Norman Metzger, executive director of Indiana Legal Services, remains enthusiastic about the program. He gives a great amount of credit for the success to Chaudhary and is haunted by the thought that the idea could have been tabled.

He was intrigued when Chaudhary approached him with the idea of forming a partnership with the mental health service provider, but the economic recession and budgets cuts had reduced ILS funding by nearly $2 million in three years so no money was available to support the program.

The executive director said he “could have blown” the opportunity because of the strained coffers. However, two separate $15,000 grants from the Ruth Lilly Philanthropic Foundation, filtered through the United Way of Central Indiana, and the St. Margaret’s Hospital Guild got the program going on a part-time basis in 2010 and 2011. A two-year, $120,000 grant from the Nina Mason Pulliam Charitable Trust has turned the partnership into a full-time program.

Year to date in 2012, Chaudhary has had 70 referrals. Twenty-one clients were provided with brief service while another 32 clients were accepted for representation.

Before the partnership, Metzger said these individuals were falling through cracks.

“These are poor people who are in such challenging and compromising situations that they can’t, on their own, access legal services,” Metzger said.

He called the Midtown clients “literally most vulnerable people in our society.” In addition to not knowing how to access legal help, they often do not even know their problem can be solved with a lawyer.

“I think every mental health clinic in the state of Indiana ought to have access to a program like this,” he said.

As an example, he pointed to Chaudhary’s hard work in securing Medicaid benefits for a 40-year-old patient, which prevented the difficult situation for Midtown of providing services without reimbursement.

A key part of the Mason Pulliam grant was the inclusion of legal interns into the partnership. For the fall semester, two licensed attorneys who are enrolled in the Master of Laws program at the Indiana University Robert H. McKinney School of Law are working with Chaudhary.

Legal services, by nature, are constant triage, Chaudhary said. The unpaid interns enable him to take a step back and still handle the workload. With the extra help, he now has the ability to spend more time with cases, researching and writing well-crafted letters. Before, he was almost to the point of having to put the Midtown clients on a waiting list.

“I think people wouldn’t realize the effect even the small things can have on a person who has mental health problems,” Shamsi said.

For Shamsi, the MLP internship provides the opportunity to explore the medical industry and, she said, help her find a career path. Her concentration in the LLM program is health care law, an area she is attracted to because she sees the opportunity to make a difference.

Dunkley came to the MLP internship with experience working in mental health services in her native Australia. As an LLM student at McKinney studying international and comparative law, she was directed to the Midtown MLP through the school’s pro bono program.

The internship is allowing her to get a better view of the American legal system than she could get sitting in a classroom, she said.

During the summer months, Chaudhary had two I.U. McKinney School of Law students as interns. They shadowed him, drafted pleadings, did legal research and put together a presentation on advance directives for the Midtown Older Adult Services.

Both Kellams and Metzger see the interns as a natural extension of the partnership. The internship not only provides more help with the workload, it also gives the students valuable real-life experience in talking to clients, assembling the facts and applying the law.

“It’s very exciting to run something like this,” Chaudhary said. “The way I see it, it’s going to rise and fall, depending on how much effort I put into it. That’s a constant motivation here.”•