Lawyers are trained not to air their clients’ dirty laundry, but an attorney defending a murder suspect posted photos of her client’s leopard-print underwear on her personal Facebook page. A mistrial and the lawyer’s termination followed, the Miami Herald reported last month.

Perhaps she could have benefited from the social media and ethics presentation at the Indiana State Bar Association annual meeting, one of an array of programs Oct. 25 and 26. The Florida lawyer’s indiscretion is an extreme case, but it’s not unique in an atmosphere where not just sharing, but oversharing, is sometimes the expectation.

“It’s kind of the culture of social media that is directed at disclosure and openness, not guardedness, and there’s also sort of a seductiveness about it,” said Don Lundberg, a partner with Barnes & Thornburg LLP. “But there are confidentiality obligations to clients that are really quite sweeping and almost the very nature of social media is contrary to the obligations lawyers have to maintain all information confidentially.”

“There are cases that come up where folks do not recognize that what you’re putting out there is not necessarily private,” Noe said, even on pages where a user thinks she might be controlling access. “You can control who sees your stuff,” she said, “but you can’t control who shares your stuff.”

Noe said even seemingly innocuous comments shared online could have unintended consequences. Posting something such as “I can’t believe the crazy thing that happened in court today,” she said, could cross a line.

“You just never know if someone who sees that is going to be able to piece it together,” Noe said. But attorneys don’t lose their voice entirely where social media is concerned. “For the most part, there’s a line between talking about cases and talking about the practice,” she added.

Lundberg said the forum should be beneficial for attorneys who use social networking, even though the lines aren’t always clear.

“It could be and probably is the best course to treat it as a bright line – what happens in the office stays in the office,” Lundberg said. “But lawyers are not robots.”

The question of when social networking crosses the line into advertising, as well as advertising in multiple jurisdictions, will precede Lundberg and Noe’s presentation.

Kidd said the presentation will look particularly at media markets such as Chicago, Cincinnati and Louisville that cross state lines.

“What we know is that certainly there are different approaches to advertising in the surrounding states,” he said. “Our goal really is to highlight those differences.”

How a lawyer responds to a press interview can make an impression. John Tompkins, a founder of Brown Tompkins Lory & Mastrian in Indianapolis, will advise attendees on making the impression they desire.

Tompkins will put himself under the media spotlight. He’ll be interviewed by WISH-TV political reporter Jim Shella in a role-playing scenario that participants will critique in “Tips from the Trenches: Media Training & Public Access Laws,” a two-hour CLE Oct. 25. John Krull, director of the Pulliam School of Journalism at Franklin College, also will speak.

Tompkins said participants will also have a chance to hear from Shella about how he prepares for and approaches interviews. And while Tompkins will talk about the rules of professional conduct that govern pre-trial publicity and attorney interaction with the press, he will also focus on technique.

“I think attorneys commonly assume their audience is other attorneys,” he said. “We really need to be conscious of our audience.”

The presentation will be helpful, Tompkins said, for any attorneys who have dealings with the press. These days, that’s increasingly common. “It’s a very timely subject. There’s a lot more media coverage, for various reasons, of legal matters,” he said. 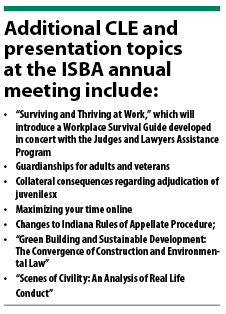 Mark Chinn is out to kill the billable hour, and he says whether attorneys realize it or not, it’s going the way of the Rolodex.

The Jackson, Miss., family law private practitioner is the author of “Dumping the Billable Hour” and is the key speaker during a three-hour CLE alternative fee summit on Oct. 25. Participants will use the information to develop best practices for alternative billing by practice area.

“It’s in much greater use than anybody realizes, I think,” Chinn said of alternative fee structures that move away from billable hours. Yet there is entrenched resistance.

“I would say the vast majority of smaller firms can’t even think of anything other than the billable hour,” he said. “How do you pay associates when you’re not judging by the amount of hours they spend, but by the amount of value they bring in. … It’s a new mindset.”

In his practice, Chinn tells clients up front what the maximum fee will be for his services, and then typically offers three options based on what can be achieved, what the client expects, and the client’s resources. If a case appears likely to settle, for instance, he may advise a client to pursue the least expensive option, but a client would still know what the fee cap would be in any circumstance.

The arrangement gives a client certainty, and it also focuses the attorney, Chinn said. “It puts pressure on the lawyer at the very beginning to very clearly define the scope of the work.”

Altman Weil’s 2012 Law Firms in Transition survey found alternative fees on the rise: 94.5 percent of firms used some form of non-hourly billing. But Chinn also saw a disconnect in the numbers. At firms of more than 1,000 attorneys, 80 percent expected alternative fee arrangements will be adopted as a standard. At firms of fewer than 100 lawyers, the number declined to 70 percent.•