Editor's note: The online version has been updated to reflect a Dec. 17 order regarding the Conours' dissolution of marriage.

Ex-attorney William Conour told a judge this month that he has not secured legal representation in his multi-million-dollar federal wire fraud case 10 weeks and $50,000 after separating from his lawyers.

Conour earlier this year said in federal court that he would not be a pro se litigant in the criminal case against him, but he is representing himself in court elsewhere. An examination of two such cases reveals a lifestyle in which the former leading personal-injury and wrongful-death attorney and his wife claimed monthly expenses in excess of $40,000 – more than 2.5 times their claimed monthly income.

Meanwhile, an alleged Conour victim who spoke to Indiana Lawyer claims he is owed money from a trust dating to the mid-1990s – years earlier than instances of alleged misappropriation that have been identified.

The government accuses Conour of misappropriating more than $4.5 million from at least 25 clients’ trust funds in a Ponzi scheme dating to 1999. The case in the District Court for the Southern District of Indiana is U.S.A. v. William Conour, 1:12-CR-0129.

Conour on Dec. 4 told Southern District Chief Judge Richard Young during a status hearing conducted by phone that he hadn’t retained counsel after his former defenders withdrew in September. Young scheduled an in-person status conference for Conour at 11 a.m. Jan. 24 at the federal courthouse in Indianapolis.

Richard Cox, a special U.S. attorney from the Central District of Illinois who is prosecuting the case against Conour, said Young indicated during the phone hearing that he expects to set a trial date at the January status hearing.

Since parting ways with his last attorneys, Richard Kammen and Dorie Maryan, Conour has represented himself in federal court motions and in two hearings conducted by phone regarding the status of his legal representation.

When Young in September asked Conour if he intended to represent himself, Conour said he didn’t and that he required a disbursement from a $100,000 trust fund he’d established with the court for victim restitution and other purposes in order to retain legal counsel and for living expenses. Young allowed Conour a disbursement of $15,000, leaving a balance of $39,297.35. In October, Young granted Conour another $35,000 from the trust.

Meanwhile, Conour appeared as his own lawyer in a divorce action that was finalized recently in Kosciusko County and in a mortgage foreclosure suit against him in Hamilton County. Conour’s wife, Jennifer, filed for divorce in May, a month after her husband was charged. The foreclosure was filed in March.

Kosciusko Superior Judge Duane Huffer on Dec. 17 signed a verified waiver of final hearing, settlement agreement and decree of dissolution of marriage for the Conours.

Julie Camden of the Indianapolis law firm Camden & Meridew P.C. represented Jennifer Conour in the divorce filing and entered an appearance on her behalf as an intervener in the foreclosure. A firm representative who responded to telephone messages said Camden would not discuss the proceedings.

Telephone messages left for William and Jennifer Conour were not returned.

On May 24, the Kosciusko court approved an agreed provisional order that divided the couple’s three Hamilton County properties and granted Jennifer Conour physical custody of their minor children. The Dec. 17 order finalizes the earlier provisional order with some modifications.

The Dec. 17 order says that Jennifer Conour will get a Carmel home on Branford Street that, according to Hamilton County records, has an assessed value of $452,500. The order also grants her the use and possession of a Sheridan horse farm with an assessed value of $229,400 from which she operates Equus Inc., which provides dressage training for equestrian sports.

William Conour was granted use and possession of the 9,784-square-foot Carmel house on Sedgemoor Circle that is now the subject of the foreclosure suit. That house has an assessed value of $1.2 million and recently had been on the market for $2.5 million. According to Hamilton County property records, the house has 25 finished rooms and 10 fireplaces. The Conours agreed in the provisional order that, “if necessary, they will relinquish possession and ownership … to Salin Bank and Trust Company.”

But Conour, pro se, is fighting the foreclosure Salin filed. A final judgment of $370,681 was entered for Lafayette Bank & Trust on Sept. 27, but Conour filed a motion to correct error and vacate judgment, and the matter was reopened. As of mid-December, no further proceedings had been scheduled on the foreclosure. 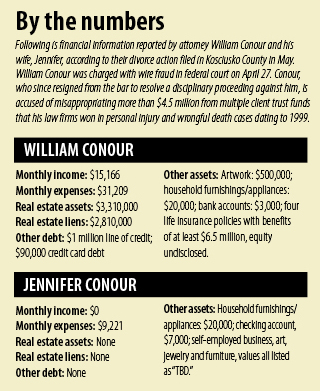 After filing a Freedom of Information Act request with the Kosciusko court, Indiana Lawyer was furnished verified financial declaration forms that the Conours filed in their divorce action.

Jennifer Conour claims no income and expenses of $9,221, $6,600 of which is for rent and mortgage payments on the horse farm. The category of “other expenses” is marked “TBD.”

Jennifer Conour reported no other monthly expenses greater than $700. But on her Facebook page in mid-December, she listed extensive travels in 2012: 16 trips, including such international destinations as Florence and Venice, Italy; Amsterdam, Madrid, Norway and Helsinki; and continental stops in Sacramento, Calif.; Oregon and Florida, among others.

William Conour bought the Sedgemoor Circle home in the Bridlebourne subdivision in 1996, according to property records. Around that time, Conour was to have established a six-figure trust for a child who was about 18 months old when his father, Michael Condon, died in a workplace accident in South Bend in 1994. Conour’s firm represented Michael Condon’s estate and his survivors in a wrongful-death case that was settled.

“That (trust fund) was the only thing I had left of him,” Zackery Condon said in a telephone interview. A person with knowledge of the cases confirmed Condon among the victims.

Now 19 and living in Mishawaka, Condon said that as a teenager he learned about the trust that Conour was to have established for him. He said he learned that he could expect to receive $10,000 annually, beginning at age 18, for his education.

Condon said Conour released a single payment of $10,000 to him when he enrolled for studies, but not without repeated requests. “I kind of had to drill it out of him,” Condon said.

Sara Masterson, Condon’s mother, said in a phone interview that reaching a settlement was a long, hard process in which she had to repeatedly relive her husband’s death during depositions. When the case was finally resolved, she remembers sitting at the table with Conour as he described the trust structure. Along with the yearly disbursements for his education, Zack would get a quarter of the trust at age 25, half at 30, and the remainder at 35.

“I was a single mom. It meant for me that Zack was going to have an education,” and be provided for when it came time to raise a family, Masterson said.

“From what I understand, Zack is lucky to have gotten what he has,” she said. “That’s what I’ve come to realize … it’s no longer there for him.”

Now, Condon has his own five-month-old son, Isaiah, to support. He said he’s looking for work in a tough economy and doing his best with what’s available to him.

“I actually have a lot of difficulties,” he said. “I can’t pay for college right now.”

But Condon is looking ahead hopefully. His plan is to study psychology. “I just want to make my life and other people’s lives better than they are,” he said.•