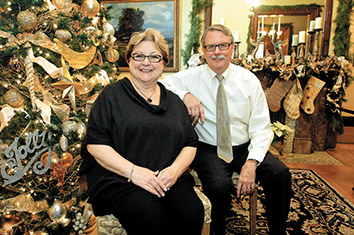 English author Charles Dickens never specified what Ebenezer Scrooge did for a living, but some have speculated the main character in “A Christmas Carol” was a lawyer.

That’s hard to believe, especially considering the traditions and festivities law firms engage in during the holidays. The fun things they do to celebrate the season show attorneys are not likely to greet this time of love and charity with a “bah, humbug.”

Christmas stories and holiday memories often involve the description of a crackling fire. The glow, the warmth and the cozy feel make a fire a natural fit for the season.

So it is not surprising that a fireplace, garnered as part of a settlement, ignited a Christmas tradition in the litigation practice at Bingham Greenebaum Doll LLP. What began as a simple gathering of a few lawyers around the yule log has morphed into a

practice-wide party that includes attorneys, paralegals and secretaries taking up about a quarter of the 28th floor and enjoying a spread of food, beer and camaraderie from late afternoon until the last person leaves.

Campbell got the contraption when he represented a client against a fireplace maker. When the defendant advanced a settlement offer, it made his client whole but not a lot was left over to cover the attorney fees. So Campbell asked for something to sweeten the deal – one of those fireplaces.

Retired U.S. Magistrate Judge V. Sue Shields, who was running the negotiations, heard Campbell’s request and left the room to discuss it with the opposing counsel. Twenty-five minutes later, she returned and told Campbell he got his wish.

A few days later, workers arrived at his office and assembled the fireplace. It is made of walnut with a heater inserted and an array of lights and mirrors to create the appearance of flickering flames.

“This thing is beautiful,” Campbell said.

A few working days before Christmas, the fireplace becomes the centerpiece of the litigation practice bash. While the imitation crackling fire started the tradition, the staff has expanded the festivities by phoning the firm’s litigation attorneys who do not attend the party and singing Christmas carols into their voicemails.

The fireplace inspires a bit of lighthearted fun, but not everything secured in a settlement agreement is welcomed at the holiday party.

“One partner got a shotgun,” Campbell said, “but we didn’t think it would go well with the fireplace.”

After the Thanksgiving turkey has been served and while the football games are still going, a handful of individuals from Cline Farrell Christie & Lee begin decorating their office for the holidays. 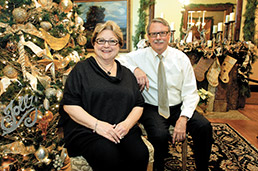 Piece by piece, over the next three days, the house-turned-law-office gets a makeover. Nineteen trees are dressed with lights and ornaments, five mantels are decorated, 21 wreaths are placed, and more than 400 feet of garland is strung.

“When the building has its Christmas outfit on, with the trees and lights, it just smiles,” said Kathy Lee, partner at the Indianapolis law firm.

When the firm was first shown the nearly 150-year-old building on North Delaware Street as a potential office, Lee immediately began imagining the space decorated for the holidays. Move-in day came in September 2001 and ornaments were hung that first Christmas. 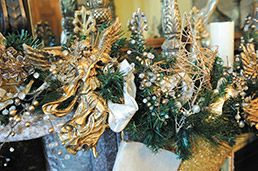 No inflatable Santas allowed. Items for the Christmas display must be tasteful and fit the appearance of the house. Collected all year long, the decorations generally reflect the central motifs of earth, music, angels and, of course, lots of gold.

Visitors who come into the building are awestruck and children find they cannot quit looking at the main tree. Indeed, for the two partners who do mediation, December is a busy month because clients and other attorneys schedule meetings there so they can see the decorations. 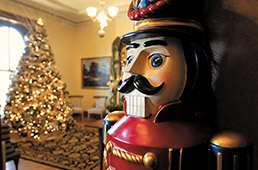 The Cline firm wants people to come in and share the holiday experience, Lee said. This season, the office will get to show-off the sparkles and meet new friends as it participates for the first time in the Benjamin Harrison Presidential Site Candlelight Evening on Delaware Street on Dec. 28.

If being in the building does not put people in the Christmas spirit, Lee said, then nothing will.

Attorneys and staff members of Benesch Friedlander Coplan & Aronoff LLP law firm have started an in-house competition that is helping them get a head start on the most common resolution that is made after the holidays.

For the first time, the firm has organized an informal contest across all its locations for teams to walk the equivalent distance roundtrip from Calgary, Canada to the North Pole. It is a wellness initiative that was started to help employees keep the extra pounds at bay while they indulged in holiday eating and be heart healthy by Valentine’s Day.

Roughly a month into the competition, Jeffrey Abrams’ team has taken about 1.5 million steps but is near the bottom of the rankings. The partner-in-charge of the Indianapolis office has already sent an email, telling his troops to get moving.

To reach the North Pole and return to Calgary, the teams will have to trek 5,380 miles (or nearly 11 million steps).

The current first place team, hailing from Indianapolis and dubbed “Lost in Place,” has logged a little more than 2 million steps. However, Abrams noted, that group successfully recruited the office runner who regularly racks up 20,000 steps daily, delivering documents all over the city.

Recently, the teams have passed Fort Nelson where now the day time highs are below zero and the sun only shines 6 hours a day.

The competition is inspiring the Benesch employees to exercise. Abrams usually works out in the mornings but when an early meeting interrupts his routine, the contest motivates him to spend an hour on the treadmill when he returns home at night to make his quota of steps.

He has been inspired by the program, which may lead to Indianapolis lawyers not associated with Benesch getting a chance to participate in a similar effort. Abrams will be president of the Indianapolis Bar Association in 2014, and he wants to hold a similar competition during his tenure involving local law firms.

To boost his team’s total, one member has suggested they do a bar crawl late one afternoon. But Abrams has an alternate plan. If the stats do not improve, he is prepared to remind the many associates on his team that the partners may view their walking performance as an indicator of their partnership potential.

While he does not know what the winning Benesch team will get, Abrams is confident what is in store if his team loses.