Home » Will small claims court stay or will it go?

The Indiana Supreme Court will decide whether a Marion County judge or a township trustee has the authority to determine where one of the state’s busiest courts will reside.

In Re: Mandate of Funds for Center Township of Marion County Small Claims Court Order for Mandate and Mandate of Funds, 49S00-1207-MF-420, involves issues of separation of powers and who controls the purse strings and day-to-day operation of the court. 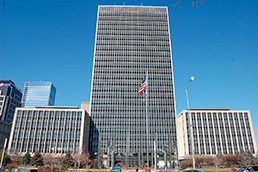 Center Township Small Claims Judge Michelle Smith Scott in 2011 issued a mandate order seeking funds for her court to hire additional staff, reconfigure the offices and remain where it’s always been – in the Indianapolis City-County Building. The order came after Township Trustee Eugene Akers and the township board approved a move of the court to the Julia M. Carson Government Center at 300 E. Fall Creek Parkway in Indianapolis.

Special Judge Charles L. Berger last year affirmed Scott’s mandate order and said the court would stay put and get most of the additional money that Scott requested. Akers and the township board appealed, and a decision is expected soon from the Indiana Supreme Court.

she believes hers probably is the busiest court in the state. “We’re able to handle it quite well,” Scott said of the court’s current location.

But Akers, who worked briefly as a deputy in the court prior to his election as trustee, disputes that. “The court is too small. It’s confining for the public and the staff.”

As trustee, Akers spent about $539,000 remodeling the former 300 East restaurant and bar in the Carson Government Center on Fall Creek Parkway to house the court, according to court documents. “The advantages are it’s larger, it can seat 100 people in the court, and there is room enough for the staff,” he said. “They’re not sitting on top of each other and it’s more convenient and it’s less costly to the taxpayers as far as the trustee’s office is concerned.”

Akers noted that the current configuration of the court requires users to walk through the clerks’ stations before entering the court. “There is no privacy for the staff,” he said.

Users also would benefit, Akers contends. “They (wouldn’t) have to worry about running out and putting some money in the meter if it’s a large court day.”

Berger toured both facilities before he ruled in Scott’s favor in June.

Berger wrote that Akers “failed to adequately study and analyze the impact of the move” and didn’t consult with Scott. Berger also ordered that staff in the court should report to the court rather than the trustee after evidence was presented that clerks “view the Trustee, not the Court, as their employer.”

Akers said he talked to Scott before and after his election about the need to move the court, but he said those talks never included discussions of locations outside the City-County Building. “The point was moving; not where,” he said. 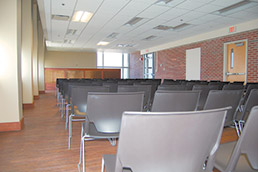 Akers and the board argued that Scott has a personal lucrative interest in performing weddings – about 1,700 in 2010 and 2011, according to court records – that drove her desire to stay at the current location near the clerk’s office. Berger dismissed the concern as “speculation … unsupportable by credible evidence.”

“There’s always a power struggle between the courts and the council (or other funding body) as the case may be,” Isenbarger said. “What I would say is, not as counsel for the court but just as a practicing lawyer and a member of the local bar association, it’s really important that we get those things right. For the vast number of people in the community, their touch with the legal system is the small claims court.”

Karl Mulvaney of the BGD team that represented Scott said, “We certainly believe we presented arguments that judges are entitled to control what goes on in their courtrooms.”

Sections 1 – 3 of Indiana Code 33-34-6 give a Marion County township trustee the responsibility of providing a small claims courtroom, offices, supplies and staff. But Berger concluded in his ruling, “the Court cannot be denied the ability to control its daily operations and ensure that its location, facilities and policies ensure adequate access to justice.”

But township attorney Greg Hahn of Bose McKinney & Evans LLP said the trustee has clear responsibilities under the law.

“The statute says the Center Township trustee and, in fact, all the trustees have a duty to run those courts,” Hahn said. “That’s been the statute for a long time, and they’ve had that authority, or duty, however you want to look at it.