Home » From bridge builder to Boilermaker

In trying to build two bridges across a major river between two states while coordinating with two state transportation departments, two governors, and an array of federal agencies – not to mention facing many local residents angry over the prospect of tolls – the staff of the Louisville and Southern Indiana Bridges Authority would sometimes get a little tense.

To relieve the stress, the employees would turn to the bridges authority then-Executive Director Steve Schultz, quote a random line from a movie and ask where it came from. Schultz would pause, think and then recite the movie’s title. 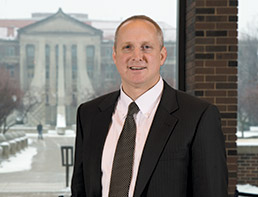 “On a good day, he’s got a terrific sense of humor,” said Charles Buddeke, chairman of the bridges authority. “He loves to quote lines from movies and books.”

The effort to build additional bridges over the Ohio River to connect Clark County with Kentucky languished for decades. Schultz was handed the reins just as another push for construction was started. Although he admits he did not know anything about federal transportation when he accepted the position in 2010, he helped lead the project to a groundbreaking.

Now he is using his affable personality, political acumen and legal expertise to guide another construction project – creating the in-house legal counsel position at Purdue University.

The Indianapolis native was selected by Purdue President and former Indiana Gov. Mitch Daniels. Schultz will be the first in-house counsel for the university, which had been the only school in the Big Ten Conference that relied solely on an outside firm for legal assistance.

He has never worked in higher education but the offer was attractive for multiple reasons. On a professional level, Schultz likes having the opportunity to work at a research institution that teaches future generations. On a personal level, he is happy to become part of a school to which his family has strong ties, namely his father who played football for the Boilermakers.

Also he was lured to the job by the chance to work with his former boss. Schultz served as chief counsel during the Daniels’ administration, and he accepted the governor’s request that he lead the bridges project.

“I just have a lot of confidence that he’s going to do great things for Purdue and really beyond Purdue,” Schultz said. “I think when he sets his mind to big challenges, he has a way of tackling them as I think he demonstrated in his tenure as governor. The opportunity to be a part of that, to maybe bring a fresh look at the challenges that face higher education and maybe bring some innovative ideas to addressing those challenges, is what attracted me.”

Schultz described his career as an attorney as specializing in being a generalist. However he has learned from each of his positions and brings that knowledge to each new assignment.

His tenure as general counsel for Irwin Financial Corp. in Columbus introduced him to a stakeholder model which he then carried to his work in the Daniels administration as well as with the bridges project.

The model at Irwin was to balance its duties to its shareholders with its responsibilities to other stakeholders, such as regulators, customers and employees, Schultz explained. Whenever the bank had a dilemma or if there were competing interests among stakeholders, he said, the institution tried to strike the right balance and improve the tradeoffs.

Irwin struggled and eventually succumbed during the economic recession. Remembering the final 18 months at the bank, Schultz talked about how longtime customers were continually supportive.

“One of the things my Irwin experience showed was just how if you conduct yourself in the right way as a business, as a responsible corporate citizen, people will stand by you, loyalty is there,” he said. “Loyalty is there beyond the business transaction.”

Robert Grand, Indianapolis managing partner at Barnes, recruited Schultz to the firm. The young attorney impressed Grand as being intelligent, hardworking and possessing a lot of common sense. Schultz rose quickly at the firm and, despite his young age, was often given first chair responsibilities.

“This will be a very good role for him,” he continued. “He’s a very even-keel guy who plays well with others.”

In bringing his former chief counsel to Purdue in January, Daniels pointed to Schultz’s experience in state government and private and nonprofit sectors. The former governor described him as a tested leader who had handled tough assignments.

Schultz plans to spend his first months at Purdue determining how to bring in-house the activities the longtime outside counsel of Stuart & Branigin LLP has historically done. Also, he will be identifying legal expertise already inside the university and developing ways to work together with that expertise.

The attorney is not sure what Daniels’ agenda for Purdue is but he has a hint from his work for the former governor.

“I think he’ll bring an innovative mindset to his position,” Schultz said. “I think he’ll also look at any particular activity that comes up in terms of whether there’s an opportunity to do it a better way. Again, if I know him, he’ll ask the question, ‘Do we even need it in the first place?’”

To get the bridges built in the Louisville region, the bridges authority developed a two-state solution that Schultz believes could become a model for other large-scale infrastructure projects. Specifically, the bridge project was divided into two parts with Indiana building the east-end bridge and financing it through a public-private partnership arrangement and Kentucky constructing the downtown bridge using traditional public financing methods.

During the time Schultz and Buddeke worked together at the bridges authority, Buddeke said Schultz excelled at legal research and was always steering the project. Many times the whole thing was on the verge of collapse but Buddeke would bring out a bottle of bourbon, order a pizza and Schultz would lead the group in finding a way over the obstacle.

“I would hazard to guess if it weren’t for Steve Schultz, we may not have the project,” Buddeke said.

Schultz is relocating his family to West Lafayette and preparing to expand his specialty in being a generalist into public education. To his new job, he will take a sense of pride in being a Boilermaker and, like he has in the past, will remember the lessons from his previous jobs.

From the bridges project, he said he learned what can be achieved when people dedicate themselves to serving a larger cause and put aside their differences. He also realized how being open to innovative approaches can ultimately be the key to getting things done.

“I think those are lessons that can be applied anywhere, even in higher education,” he said.•