Home » On the road, jurists give public access to appellate cases 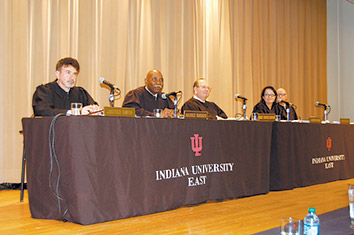 It’s no accident that on a college campus in Richmond recently, the Indiana Supreme Court heard a case that involves allegations of hazing and potential liability for an incident at a Wabash College fraternity.

Justices and court staff deliberate about which cases would be good ones for traveling oral arguments, Chief Justice Brent Dickson said. Ideal cases are those that have broad public interest, would be engaging for the public at the chosen venue, and are not highly technical.

Indiana’s appellate judiciary for more than a decade has heard arguments around the state, many through the Appeals on Wheels initiative of the Court of Appeals. Judges and justices say the arguments promote transparency and give the public a chance to demystify a part of the judiciary many seldom see.

“At the 100th anniversary of our court, our goal was to visit every county in the state, and we almost have,” Court of Appeals Judge Melissa May said. “One thing it does is allow everybody in the public to see what our appellate court really does,” she said.

While the Supreme Court typically hits the road fewer than five times a year, the Court of Appeals averages about 27 Appeals on Wheels arguments each year, according to court spokesman Martin DeAgostino. Since beginning the effort in 2000, he said the court has heard 365 cases in 64 of Indiana’s 92 counties. Arguments most often are heard at high schools, colleges, law schools or courthouses.

“First, we look at cases where oral argument has been requested, then we look for a case that may be of interest to that area where we’re going or the type of crowd we expect,” May said. For an argument at a high school, for instance, “We try to find a criminal search and seizure case, preferably a school case if we can find it.”

allow the audience to ask questions after oral arguments, so long as the questions don’t pertain to the case at hand.

After the Supreme Court’s case in Richmond, the Q&A allowed the public to lift the curtain on the court’s behind-the-scenes work. Dickson explained to an audience of about 75 that when sitting in Indianapolis, the court typically retires after arguments and confers. Justices talk about the case and get a sense of each justice’s views and where consensus may lie. After the Richmond arguments, justices planned to confer upon returning to the Capitol, Dickson told those who watched the arguments.

An audience member asked the justices how the court decides who will write an opinion. Justice Mark Massa said it’s a marker of the panel’s collegiality that a justice who earnestly wishes to write an opinion usually gets to do so. But he allowed that there are times when competing interests prevail.

Massa explained that he and justices Robert Rucker and Loretta Rush each recently wanted to write an opinion. A coin flip settled the matter. Rucker won. “Seniority,” he quipped to a laughing audience.

May said the COA attempts to arrange Appeals on Wheels arguments so that the panel judges hear cases in the regions from which they were appointed. Cases usually are selected for traveling arguments about a month in advance.

“One reason we use a lot of criminal cases for traveling oral arguments is the state attorney general’s office has been wonderful to deal with, as well as the public defender’s office,” she said. People at the venues, too, “are really excited to have us there, and they bend over backwards to make sure everything runs smoothly.”

At Indiana University East, students in the criminal law program helped out with the proceeding. Sophomore Stewart Homdrom had the honor of gaveling the court to order as a special bailiff. Before the arguments, he and fellow students passed out programs and directed guests.

“It’s a big event for such a small campus,” senior Christa Ginter said.

The events also provide justices an opportunity to visit with local colleagues and talk about some of the things happening in Indianapolis that people around the state might not be aware of. Dickson said justices also learn the concerns of attorneys, judges and legal professionals in areas where the court sets roving arguments.

It’s a big event for the legal community, too. “When’s the last time you’ve had an opportunity to put a bug in the ear of people from the Supreme Court?” Wayne Superior Judge Darrin Dolehanty said as attorneys and others mingled with justices before the arguments in Richmond.

“Could we go to the Statehouse and watch these? Sure,” Dolehanty said. “But not without taking away from work or school.”

As a matter of convenience, Dickson said the court often schedules traveling arguments to coincide with judges’ meetings around the state. That was the case in Richmond.

Robert Chamness, director of probation for Wayne County, said the justices have come to I.U. East on prior occasions, and those events have been popular with students and people in the legal community.

“It’s just an opportunity to get to see some of the things that happen at the Supreme Court level,” Chamness said.

“I think it’s exciting to have the justices come to Richmond,” said Jane Wynegar, whose practice in Wayne County primarily concentrates in trusts, wills and criminal law. “I think it gives the community a broader view of the legal system.”•

Click here to read a recap of the arguments in Richmond on the Wabash College hazing lawsuit.