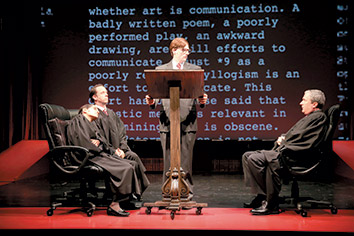 Following the completion of arguments before the Supreme Court of the United States, Indiana attorney Wayne Uhl found himself in a gaggle of reporters on the outside plaza. The 1991 case with its questions about nude dancing, pasties, G-strings and First Amendment rights had, not surprisingly, attracted national media interest.

“Have you ever been to a strip club?” one reporter asked.

“Why not?” the reporter pressed.

“That’s not my kind of entertainment,” Uhl shot back.

Certainly the performances in adult venues are not to everyone’s taste, but the dispute over artistic expression and public indecency captured in Barnes v. Glen Theatre, 501 U.S. 560 (1991), is the subject of the off-Broadway play, “Arguendo.” The Elevator Repair Service theater company in New York created the work using only the texts from the Supreme Court arguments and from television interviews given by the principle participants.

The case originated in South Bend when the local prosecutor, Michael Barnes, now a judge on the Indiana Court of Appeals, filed misdemeanor charges against the dancers at the Kitty Kat Lounge and Glen Theatre. By performing without even scant clothing, the women were violating the state’s public indecency statute. 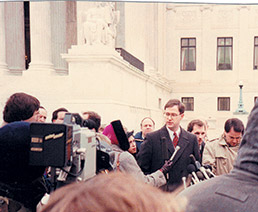 However, the dancers fought back, charging the law trampled on their right to free speech. They filed suit in federal court, and the parties battled all the way to the nine U.S. justices where, by a 5-4 vote, Indiana’s restriction on totally nude dancing was found to not violate the First Amendment’s guarantee of freedom of expression.

Uhl, now an attorney at Stephenson Morow & Semler in Indianapolis, is stunned that the words he used 22 years ago to persuade the Supreme Court justices have been deemed worthy of a play.

The roots of “Arguendo” can be traced back to the Elevator Repair Service’s performance of “Gatz,” an eight-hour word-for-word delivery of F. Scott Fitzgerald’s novel “The Great Gatsby.”

Presenting every printed word of the novel on stage raised questions about copyright, fair use and intellectual property. That sparked John Collins, the company’s artistic director and founder, to take a closer look at the Supreme Court. In fact, according to “Arguendo” producer Ariana Smart Truman, Collins became “obsessed” with the Supreme Court and began listening to archived oral arguments online.

When the Elevator Repair Service was invited to make a presentation at the 2012 Guiding Lights Weekend in Seattle, Collins plucked the transcript from the Barnes v. Glen Theatre oral arguments.

From there, the company’s ensemble began crafting a stage play around every word that the attorneys and justices said at the Supreme Court and text from C-SPAN interviews with Uhl; the late Bruce Ennis Jr., who represented the dancers; and some of the dancers.

The actors reciting the words from the arguments make a compelling piece of theater, Truman said. “Arguendo” mixes in a little bit of absurdity and humor with the very interesting arguments and provides a peek into the Supreme Court without mocking or disparaging the judicial system.

Getting to 1 First St. NE 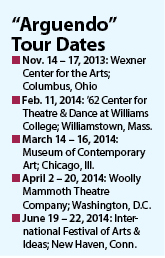 Barnes flew to Washington just to hear the arguments in January 1991. He sat in the gallery of the court and sometimes had to stifle a chuckle as the attorneys and justices went back and forth about pasties, G-strings and free expression.

Also seated in the gallery were Uhl’s parents who had driven from Virginia to hear their son’s first – and to date only – appearance before the Supreme Court.

Uhl stood before the justices, having kept the case alive in the 7th Circuit Court of Appeals and then invoking a little wordplay to entice the Supreme Court.

After hearing the case, the U.S. District Court for the Northern District of Indiana ruled in favor of the state, holding the nude dancing being done was not expressive conduct. An appeal to the 7th Circuit was initially rebuffed when the judges said they could not determine if the dancing was expressive activity without evidence. So the dancers’ attorney videotaped their performance and submitted it to the court.

The 7th Circuit reversed the District Court. It found the non-obscene nude dancing at the two businesses was protected by the U.S. Constitution.

That’s when the case landed on the desk of Uhl, then a young lawyer in the Office of the Indiana Attorney General.

The robberies, fights and other assorted problems occurring around the clubs prompted Barnes to file the charges. Even now, the Court of Appeals judge does not waiver on his decision to bring charges, but they were misdemeanors and not a priority in the prosecutor’s office. As the case advanced, Barnes considered dropping the charges, fearing the local municipality could get stuck having to pay all the attorney fees if the city lost the case.

However, the state stepped in and took the case to protect the city’s coffers.

Uhl began by petitioning the 7th Circuit to rehear the case en banc. The 7th Circuit granted the petition and listened to the arguments but still found for the dancers in a 7-4 vote.

In filing the writ of certiorari, Uhl knew the Supreme Court had not traditionally taken cases that questioned the states’ ability to regulate establishments that served alcohol. So to show this case was different, he changed the name of the case from Miller v. Civil City of South Bend to the moniker that predominantly displayed Glen Theatre, an adult bookstore which did not have a liquor license.

On the morning of the arguments, Uhl and his team went to the Supreme Court building, entered the side door, made their way through a maze to the clerk’s office, signed in and then headed to the court’s cafeteria for breakfast.

He was nervous when he finally stepped before the justices but relaxed as he started presenting and answering questions during what became a lively session. Uhl actually made two arguments.

Uhl then switched to his second argument which did sway the majority. Even if dancing was speech, he contended, Indiana’s public indecency statute did not violate the Constitution when applied to barroom dancing because the statute was a general, content-neutral law that regulated conduct not speech.

To put the arguments on stage, “Arguendo” employs a minimal set design. The main visual element is an enormous projection behind the actors of references made during the oral arguments to precedent and the First Amendment.

At a particularly tedious point in the arguments between Uhl and Chief Justice William Rehnquist, “Arguendo” introduces a dance. Music plays, the justices spin in their chairs, papers fly while the talking continues.

The play concludes with the actor playing Ennis stripping and dancing nude to underscore the questions raised in Barnes v. Glen Theatre.

Uhl keeps a box of mementos from the case that includes photographs and a transcript of the arguments. He remains appreciative to the Indiana attorney general’s office for giving him the opportunity to handle the case and argue against the reputable Ennis. But, as for the ramifications of the decision, he is uncertain.

“I will leave to others any conclusion about whether the case had larger implications or a message,” Uhl said. “It turns out that I am a very poor judge of whether things carry a ‘message,’ at least for First Amendment purposes.”•