Joe Guinn quit his job as an aviation mechanic to work for an employer offering shift work so he and his wife could split childcare duties for their young son. That’s when trouble started.

His former employer, Applied Composites Engineering Inc., sued him and notified his new employer that Guinn had signed a non-compete covenant that ACE required all its workers to sign. Guinn’s new employer terminated his employment after being notified of the clause. 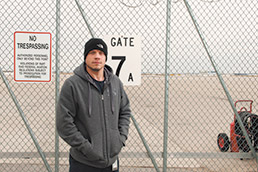 Aviation mechanic Joe Guinn lost a job when his former employer sought to enforce a non-compete clause, but he won an appellate ruling that the company may have engaged in tortious interference with his subsequent employer. (IL Photo/Eric Learned)

“I didn’t know that, being in America, an employer had that kind of authority over one individual,” Guinn said. “I couldn’t believe an employer could actually hold me back from earning a living.”

Turns out that in Guinn’s case and others recently decided on appeal, they couldn’t.

ACE sued Guinn when he went to work for a company where he performed similar work, and it prevailed at the trial court level. A Marion Superior judge granted summary judgment in favor of ACE. But in September 2013, the Court of Appeals reversed and remanded the case. ACE failed to convince the Indiana Supreme Court to hear an appeal, with justices last month denying transfer to Joseph M. Guinn v. Applied Composites Engineering, Inc., 49A02-1303-CC-239.

Now, Guinn’s attorney, Donald Foley of Foley & Abbott in Indianapolis, is asking for punitive damages in addition to the compensatory damages Guinn sought in a cross-complaint against ACE.

“They were trying to chill him,” Foley said. “The question is whether (getting Guinn terminated) was intentional, and in our view, it was.”

Fishers attorney Peter Kovacs represents ACE and noted that just one of Guinn’s claims survived at the Court of Appeals, which tossed four others he argued. Kovacs said the case is headed to mediation ahead of a trial date tentatively set for Oct. 21.

“There’s just one count left in this dispute, and that’s tortious interference” with Guinn’s subsequent employer, Kovacs said. “It really has nothing to do with the non-compete.”

But it’s clear from recent rulings that Indiana caselaw continues to be built on Donahue v. Permacel Tape Corp., 127 N.E.2d 235 (1955). The Guinn panel cited its holding, that an employer “has no right to unnecessarily interfere with the employee’s following any trade or calling for which he is fitted and from which he may earn his livelihood and … cannot preclude him from exercising the skill and general knowledge he has acquired or increased through experience or even instructions while in the employment.”

Guinn’s case is one of three appeals decided recently involving non-compete clauses, all of which resulted in published opinions in favor of the employee. Each ruling contains the word “disfavor” to describe how such covenants are viewed under Indiana law.

Kovacs has been on both sides of the issue, advising employers and employees on non-compete covenants. “Indiana strictly construes these agreements,” he said.

“They need to be as narrowly focused as is humanly possible. If you start going overboard in terms of geography, time, etc., you run the risk the court will find that overbroad.”

Foley also has advised employers on drafting covenants as well as employees such as Guinn. He agrees non-competes have their place and can be enforceable. “You’ve got to really identify what the protectable interest is.”

In Guinn, the Court of Appeals ruled that “the designated evidence could weigh in favor of the determination that ACE’s interference with Guinn’s new employment … was unjustified.”

Daniel Buffkin was a contracted information technology recruiter for Glacier Group, which obtained an injunction in Tippecanoe Superior Court preventing him from doing similar work. The COA reversed, holding that the agreement Buffkin was made to sign “is unreasonable in terms of the activities it prohibits and its geographic restraints. Accordingly, the non-competition covenant in the Agreement was unenforceable.”

She said employers have to consider the risks of a non-compete covenant as well as what they aim to protect. “It’s very fact-specific for each employer and each employee. There aren’t any magic words, but it needs to be narrowly tailored … to protect the legitimate interest of that particular employer.”

Blevins advises employers who use the agreements to stay on top of them and adjust them to keep up with their business concerns and the law. “It’s always a good idea to have those refreshed,” she said of non-competes. “Sometimes clauses are going to need to be tweaked from employee to employee.”

A third recently published appellate opinion regarding non-competes was decided Feb. 20. In Clark’s Sales and Service, Inc. v. John D. Smith and Ferguson Enterprises, Inc., 49A02-1306-PL-552, a panel affirmed a Marion Superior Court ruling denying an injunction Clark’s Sales and Service Inc. sought against a former employee and his new employer. The panel ruled the covenant was overbroad and unreasonable.

“The problem in many of these situations is the employer has an overly broad contract,” Foley said. “In Mr. Guinn’s case, they restricted him from any type of employment with an airline maintenance company, and that includes jobs he never came close to performing – sales, finance, management.

“He couldn’t even have been a janitor in competition with ACE” without violating the covenant, Foley said.

Also troubling, he added, was that everyone who worked in any capacity had to sign an identical covenant. Guinn was asked to sign a non-compete covenant after he’d already worked for ACE for a period of time, according to the appellate case record.

Guinn since has found employment as an aviation mechanic for a company that he requested not be disclosed. He said that when he lost a job after the non-compete clause was presented to his new employer, he grew concerned about whether he’d be able to ply a trade for which he put himself through school to become FAA-certified.

“To have somebody try to strip you of that is pretty scary,” Guinn said. “I disliked what they did, and I hope this keeps them from pursuing anyone else the way they did me. I put my faith in the law on this one.”•