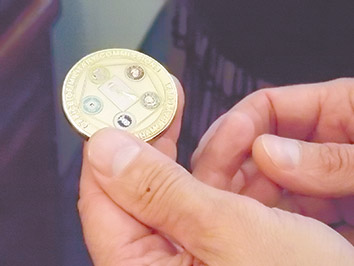 Still, the military commissions – a hybrid system which combines elements from federal and military courts that is being used to try the accused terrorists – have long raised concerns about fairness and due process.

“No one could look at what’s going on in these commissions and conclude that they’re anything other than secret, truncated, expedient justice that has only one goal and that is not to seek the truth but to ensure that these people are convicted and executed,” Kammen said.

A nationally known death penalty defense lawyer, Kammen, of Kammen & Moudy, is lead attorney on the defense team of Abd al-Rahim al-Nashiri, identified by the U.S. government as the alleged mastermind behind the 2000 bombing of the USS Cole which killed 17 crew members and wounded 39 others. The Saudi is being held in Guantanamo Bay and tried under the military commissions system where, if he is found guilty, he will face the death penalty.

The military commissions established in 2001 by the Bush administration were intended to try enemy combatants suspected of terrorism. Five years later, the Supreme Court of the United States upended the process by ruling in Hamdan v. Rumsfeld, 548 U.S. 557 (2006), that the military commissions violated the Uniform Code of Military Justice and the Geneva Conventions.

When the Supreme Court issued its opinion, Indiana Justice Steven David was at Guantanamo Bay serving as the interim staff judge advocate. (At that time, David was a Boone Circuit judge who had been called to active duty.) He pulled the decision from the fax machine and began reading to determine whether the SCOTUS ruling meant the detainees had to be released.

The detainees stayed, but the trials were put on hold until Congress created the Military Commissions Act of 2009 which gave the defendants some rights such as the right to attend their own trials.

Subsequently, David was promoted to chief defense counsel and put in charge of an office that ballooned from 15 people managing fewer than five cases to more than 100 people handling 25-plus cases. His primary responsibility was hiring and training civilian defense attorneys to represent the detainees.

He compared the creation of the hybrid system at Guantanamo to building a railroad as the train was running. David did not help craft the military commissions nor make any decisions regarding how they would function.

At that time, he remembered, the nation was struggling with distinguishing which detainees were merely soldiers and which were masterminds. The country was wrestling with how to treat the different detainees. Yet, he conceded that many believed the defendants could be tried in federal courts.

“Occasionally, I would say we could get a faster, fairer trial in Indiana, but that didn’t go very far,” David said.

Kammen agreed, saying the federal courts could handle the trials of the Guantanamo detainees just as the courts handled the trial of Oklahoma City bomber Timothy McVeigh. Kammen fears if the military commissions are deemed to be successful, they could easily be expanded to try American citizens.

Asked about the differences between defending someone at Guantanamo with someone in Indiana, he paused, let out a breath and muttered to himself, “Boy, where do you begin?”

al-Nashiri was captured in 2002 and held for four years in a CIA black site. Kammen said the government has admitted that al-Nashiri was physically, psychologically and sexually tortured during that time, and he sees an undercurrent of this case as the government’s attempt to keep secret what occurred in those ghost detention centers.

A complicating factor in the al-Nashiri prosecution is the amount of information that has been classified and how the government keeps this information from public view. Every time Kammen leaves Guantanamo, his notes are sealed and put into a high-security computer which means whenever he wants to review those notes, he has to travel to Washington, D.C., to access the computer.

Even pulling a court filing requires wading through multiple layers of secrecy and bureaucracy. To review a six-page motion, Kammen had to fly, again, to Washington. Then to talk about it with opposing counsel, he had to meet the military lawyer in a sensitive compartmented information facility.

On top of this, the defense team is not permitted to discuss the classified information with their client.

Kammen next highlighted hearsay rules as an example of how frustrating the process is at Guantanamo. Rather than calling all the witnesses the FBI interviewed during its investigation of the Cole bombing, the military commission is going to allow the federal agents to take the stand and read the 77 statements from the 66 witnesses.

One of al-Nashiri’s original attorneys, Nancy Hollander, attorney at Freedman Boyd Hollander Goldberg Urias & Ward P.A. in New Mexico, asked Kammen to join the defense team once her client was charged with the death penalty.

She echoed the criticism of the proceedings, calling them scary and a place where American justice does not exist.

“I think our job is to do the very best we can and to do everything we can to save (al-Nashiri’s) life and to show this court is a sham,” Hollander said.

Kammen sees the defense as being powerless in this process, so his goal is to be the voice of truth. The microphone and court reporter are creating a record which scholars 20 or 30 years from now will be able to review and draw conclusions.

“Ideally, history will judge that we were the ones who were speaking the truth to the power in all of this,” Kammen said.

One of the court reporters creating the transcripts is James Connor, president of Connor Reporting in Indiana. The reporters work in a separate room, watching the proceedings on a video feed that has a 40-second delay to allow the judge to cut any classified information that comes out in court.

The hearings begin at 9 a.m. and usually conclude at 5 p.m. There is a break for lunch as well as an afternoon recess to allow the defendants to place their prayer rugs and pray. The final transcripts are completed within two hours after the hearings close each day.

“I think this is such a different process from our normal trial procedures, and once completed and examined, in hindsight, many lessons will be taken away from this whole process,” Connor said.

When people look back and examine these proceedings, David hopes the focus will be on things like trial strategy and newly discovered evidence rather than the fundamental system itself. The current challenge, he said, is ensuring the military commissions are as credible as they can possibly be.

“That’s where I wish everybody would focus their discussion on, how do we make this credible, how do we make it more credible and how do we get on the other side of this so that we can get through this,” David said. “That’s the challenge.”•

Read more about the U.S. Military Commission Observation Project at IU McKinney School of Law, in which students, faculty and alumni will watch the hearings and blog about their impressions.