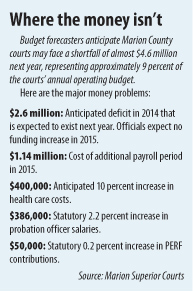 Indianapolis’ court system is used to making do with less, chipping away so far this year at a deficit of more than $2.6 million. Next year, money is expected to be substantially tighter.

“Ballpark … we’re looking at about $4.6 million in terms of shortfall” in the 2015 budget, said Sue Patterson, director of finance for Marion Superior Courts.

Some of the factors that will impact court funding in Marion County next year are likely to be felt in court systems around the state. An additional payroll period falls next year, health care costs are projected to rise, and probation officers are scheduled to receive a 2.2 percent salary increase.

Patterson and Marion Superior judges have been outspoken about needs they say that aren’t being met. The county’s probation department, for instance, addressed being shortchanged about $700,000 this year by simply not filling a couple dozen open positions in the department staff of roughly 200.

“We’re seeing an increase in CHINS cases and an increase in criminal filings,” said Marion Superior Judge Heather Welch. At the same time, “Revenues in general are decreasing.”

Welch chairs the Marion Superior budget committee formed last year as the courts sought to find ways to save money and make their case amid chronic underfunding from state and local sources. The panel consists of eight judges and Patterson to ensure input from those with experience across all areas of court operations.

“One of the most important reasons we (formed the committee) is to develop a process that identifies the high priorities to be funded,” Welch said. “That’s our responsibility to taxpayers as elected officials.”

The courts received some good news June 23 from the City-County Council of Indianapolis and Marion County, which appropriated $900,000 to close the funding gap for guardians ad litem. But the money is only projected to last until September, when the courts will likely have to return to seek another appropriation.

Patterson had warned judges during prior meetings of the Marion Superior Executive Committee that budgeted funding for guardians ad litem would be exhausted in the summer without some relief.

“This funding crisis has been around for a while and they have been spending down their reserves,” said Democratic City-County Councilman Joe Simpson, who sits on the Public Safety and Criminal Justice Committee. “Now they’re at the point where they won’t have any reserves.”

Simpson said the county needs to find a dedicated source of funding to support a worthy program.

Republican City-County Councilwoman Marilyn Pfisterer co-sponsored the increase for guardians ad litem. A former court-appointed special advocate, she said “there needs to be a stable source of funding and something that the system can depend on year to year.

“It has been a chronic situation that the guardian ad litem (program) does have a shortfall just about every year that I can remember,” Pfisterer said.

The cost of paying for guardians ad litem in CHINS cases is supposed to be shared between the state and county, but counties complain they’re picking up a greater share of the cost.

Leslie Dunn, director of the Indiana Office of Guardian Ad Litem/Court Appointed Special Advocates, said the office is performing a statewide needs assessment with the intent to go to the Legislature next year and seek an increase in the roughly $2.9 million in state funding budgeted annually for GALs.

Marion County typically receives about 20 to 25 percent of the state funding for services, proportional to the number of children served. But Patterson said the state’s share only covers about 16 percent of the total cost to serve children in abuse and neglect cases, leaving the county to pick up the remainder.

But I.C. 33-24-6-4 spells out a funding role for the Legislature if it so chooses, along with a local match from counties receiving the funding.

While the Court of Appeals decision put the onus for funding on counties, it also established the right of every child to representation in a CHINS case, said Cindy Booth, executive director of Child Advocates Inc., which provides GAL/CASA services in Marion County courts.

“Even though we use volunteers, we have to have staff to manage the volunteers, recruit them, provide office space and so on,” Booth said. “If there is such a gap, the county must fund.”

The average cost per GAL case is about $628, Booth said, and the state hasn’t increased funding since 2007. That’s resulted in rising costs for Marion County.

While court officials must return to the City-County Council periodically for additional sums to make sure children in abuse and neglect cases have a voice in court, Booth said the money has always been approved. “For some reason the controller for the county has not appropriated enough money from the beginning,” she said, even though costs could likely be estimated to within about $50,000.

Still, she said, “Marion County has been very responsive and very responsible to make sure every child has an advocate in every case.”

But some counties have significant waiting lists, Dunn said – Madison, St. Joseph and Vanderburgh among the largest. That’s why she’s asking program directors around the state who operate on shoestring budgets to assess their needs to make the case for more state funding. That would alleviate the pressure on counties feeling the strain while making sure children are represented.

“We are looking at, right now, what would it take to serve all the children across the state,” Dunn said.•