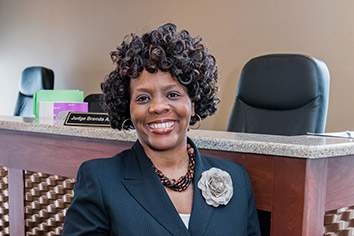 That was then. This is now.

“There was no dispute between the new judge and the (township) trustee, and no challenge to that decision” to relocate the court, said Lilia Judson, executive director of the Indiana Supreme Court Division of State Court Administration.

Roper said moving the court from the Indianapolis City-County Building to the Julia M. Carson Center on Fall Creek Parkway made sense. The venue moved March 1, and Roper sees many advantages in relocating one of the state’s busiest dockets. Center Township Trustee Eugene Akers and the township board proposed moving the court to the Carson Center.

“Parking will be a huge advantage,” Roper said. “There’s plenty of parking, and it’s free.”

The remodeled facilities also give court staff and visitors more space and provide a more user-friendly experience, she said. “I just think it’s going to be better for everyone. For the last month and a half, I’ve been talking about it from the bench and heard nothing but positive response,” she said.

“I really do believe this will be the best location for this court.”

Roper’s predecessor, former Judge Michelle Smith Scott, sued Akers after he ordered the court to relocate to the township-owned Carson Center. More than $500,000 in township funds had been spent renovating space for a courtroom before any formal decision to relocate.

In June 2013, justices ruled Scott had not been adequately included in the relocation decision. They ordered the court to stay put in the City-County Building.

Writing for the unanimous court, Justice Robert Rucker observed that the central location of the court in the township, its easy access to mass transit, and its proximity to other courts and government offices in the City-County Building were important considerations for a docket with a substantial volume of collections and landlord-tenant disputes.

“[O]ur job is not to assess whether the Carson Center would be a ‘better’ location for the court. Rather, we must determine whether the record contains substantial evidence of probative value that there is a clear and present danger of impairment to the court or court functions if the court is not maintained and reconfigured in its present location. We find that it does,” Rucker wrote in In Re Mandate of Funds for Center Township of Marion County Small Claims Court Order for Mandate and Mandate of Funds,  49S00-1207-MF-420.

“We conclude the record is replete with probative evidence that moving the Center Township Small Claims Court away from its present location poses a clear and present danger to access to justice for the litigants it serves, and that maintaining and upgrading the Court in its present location is reasonably necessary to preserve that access,” the court ruled. That order also mandated funds to renovate the court space in the City-County Building and hire additional staff as Scott had requested.

But Judson said the court’s opinion in the mandate action must be weighed in light of the conflict between the former judge and the trustee, and within the context and evidence in that case.

Roper defeated Scott in the Democratic primary election last year, and Roper campaigned on moving the court. She was appointed to the bench before her term began after Scott agreed to a lifetime ban from judicial office rather than face a Judicial Qualifications Commission hearing into allegations she used her judgeship to profit from a wedding business.

“The new judge had decided to move and had gone and reviewed the facility and looked at things going on downtown with parking,” Judson said. The township court also provided notice of the move to state court administration and invited officials and the public to open houses before the move. “It seems like everyone’s in agreement,” Judson said.

Meg Christensen is a partner with the Bingham Greenebaum Doll LLP team that successfully represented Scott in the mandate action. She said the move is puzzling in light of the justices’ ruling, though she’s unaware of any action challenging it.

“The concerns were addressed pretty thoroughly in the Supreme Court order about access to justice, and the landscape in Indianapolis hasn’t changed in any way to make the Carson Center a better location,” she said. “I’m shocked by the decision to move the court.”

Roper believes she’s following the court’s opinion in relocating to the Carson Center. “As the judge, I am making the decision of where the court will be located,” she said.

She said court days on Tuesdays, Wednesdays and Thursdays will involve anywhere from about 40 to about 140 court users, depending on the day’s docket, and it’s far easier for users to get in and out of the Carson Center.

Marion Circuit Judge Sheryl Lynch, who also was elected to the bench last year, said the diminishing amount of parking due to construction around the City-County Building is a concern and one of the biggest advantages of the Carson Center location.

“I’m hearing from attorneys and litigants they’re parking over by the (Circle Centre) Mall,” Lynch said. She said moving the Small Claims Court from the City-County Building will open up more parking spaces for users of other courts located there.

“Clearly, this is one less issue for litigants and attorneys coming to the Center Township Small Claims Court,” she said.

Christensen said the move is difficult to comprehend, though, in light of the large investment the city is making in locating a mass transit hub directly across the street from the City-County Building.

“A large percentage of litigants coming to the Small Claims Court aren’t going to be driving, they’re going to be taking the bus,” she said.

But Roper said because of the agreement between herself and township officials, the conflict that preceded her shouldn’t be an issue.

“During the campaign season, I talked a lot about wanting to move the court for the convenience of litigants,” she said. “I really wanted to make sure we had a place that was convenient for access to the court.”•