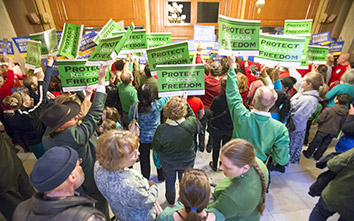 The closing paragraph of a press release issued by Lambda Legal after the passage of Indiana’s Religious Freedom Restoration Act on March 23 directed gays and lesbians to the organization’s legal help desk if they felt they had been discriminated against.

Even before Gov. Mike Pence signed Senate Enrolled Act 101, even before the firestorm of protests started and the nation turned its attention to Indiana, the RFRA appeared to be on its way to court.

“There will be a host of litigation concerning what this law means, and it will be expensive,” said Camilla Taylor, attorney and national marriage project director at Lambda Legal, a national organization advocating for civil rights for gays, lesbians, bisexuals and transgendered people.

Indiana’s RFRA adds a new chapter under the state’s civil law and procedure statute. The language says the government may not “substantially burden” a person’s exercise of religion unless there is a “compelling governmental interest” and “is the least restrictive means” available to further that interest.

Gov. Mike Pence characterized Indiana’s act, which was signed into law March 26, as “simply guidance to the courts.” But the controversy over claims the RFRA was anti-gay led legislators to pass an amendment April 2 meant to prevent providers from refusing service to a person based on sexual orientation or gender identity.

Attorneys disagree over the potential impact the RFRA will have once it reaches the judiciary.

In separate letters sent to legislators while the act was still being debated, attorneys and legal scholars laid out two very different consequences of the law. Supporters maintained the measure provided a standard for protection of religious freedom that was clearer than the approach the Indiana Supreme Court currently takes. Opponents countered the legislation upset the balance the courts have struck in Indiana between religious freedom and the other rights guaranteed by the state’s constitution and laws.

Pence and Republican leaders in the Statehouse have repeatedly asserted Indiana’s RFRA is similar to the federal Religious Freedom Restoration Act of 1993 and to the religious freedom laws since enacted in 19 states.

Indiana University Maurer School of Law professor Dawn Johnsen noted religious freedom changed with the Supreme Court of the United States’ decision in Burwell v. Hobby Lobby Stores, 573 U.S.__(2014). She served in the U.S. Department of Justice from 1993 to 1998.

Hobby Lobby applied the 1993 federal religious freedom law in a way that no one predicted, Johnsen said. There, the court allowed a for-profit corporation in a commercial setting to use the law to limit insurance coverage for birth control for female employees. Since Indiana has no protections for sexual orientation, the potential application of this law could harm people in unforeseen ways.

“It’s dangerous to adopt this kind of absolute standard because it is not possible to predict how the courts will interpret it,” Johnsen said.

Specifically, the new wording of RFRA spells out that the statute does not “authorize a provider” to refuse services, goods, employment or housing to any members of the general public on the basis of sexual orientation and gender identity. Also, the new section says RFRA cannot be used as a defense for such a refusal.

“The language, I hope, will be helpful in dampening the firestorm and resolve some of the concerns that have been expressed,” said Daniel Conkle, an IU Maurer professor.

Even without the added provisions, Conkle, a supporter of the law and a supporter of same-sex marriage, said the act would not have allowed members of the LGBT community to be denied service. A claim of religious beliefs as a defense against a discrimination complaint would fail under either version of Indiana’s RFRA, he said.

Indianapolis attorney Richard Mann was skeptical. The new section does not explicitly prevent discrimination, he said, and a business or individual could still deny service, employment or housing.

“To me, this (amended law) has created the basis for a lawsuit that didn’t exist before. I don’t think I could have sued somebody (prior to this fix) for refusing to serve someone from the LGBT community,” Mann said. He now sees the language as opening up a new avenue for lawsuits.

The fix does not change significant parts of the bill which has raised concerns, such as the definition of “person” includes a partnership, corporation and a limited liability company, as well as the phrase “exercise of religious” does not have to be central to a system of religious belief.

Moreover, a claim may be asserted under the RFRA regardless of whether the state or any other government entity is a party. In addition, the law enables the court to award costs of litigation and attorney fees to a person who prevails against the government.

Indiana’s RFRA extends beyond gays and lesbians, said Jennifer Drobac, professor at Indiana University Robert H. McKinney School of Law. The law encompasses more than incursions by the state and gives individuals and businesses the ability to use their religious beliefs to discriminate against anyone. Adultery, sexual relations outside of marriage, use of contraceptives and in vitro fertilization could all spark RFRA claims, she said.

“We don’t know what the courts are going to do,” Drobac said. “That’s part of the problem with this law.”

Conkle disputed that Indiana’s act would be used like a hammer. The idea of the statute is not to resolve these issues in advance but rather to enlist the courts to provide sensible relief by balancing the exercise of religion with the compelling government interest, he said.

Currently, the approach taken by the state judiciary is murky with its reliance on the obscure and somewhat technical term of “materially burden,” Conkle said. In City Chapel Evangelical Free Inc. v. City of South Bend, 744 N.E.2d 443 (Ind. 2001), the Indiana Supreme Court held that religious liberty in the state constitution cannot be “materially burdened” by a law.

For the new RFRA, a body of law exists in other states and at the federal level that gives meaning to the general terms of the act, Conkle said. Indiana courts will have some liberty to pick what precedent they want to apply and interpret the law in ways they find sensible.

Still, Mann sees the potential for unintended consequences. As an example, he pointed to Islam which allows plural marriage, something not permitted in Indiana. If a county clerk refuses to give a Muslim man a marriage license so he can bring another wife into his family, Mann said that would be a violation of Indiana’s RFRA.

Conkle sees the act being applied in less controversial cases. RFRA would cover such claims as a Native-American student who has a religious reason for not cutting his hair in compliance with school regulations or a Jehovah’s Witness being able to get Medicaid coverage despite refusing a blood transfusion during a medical treatment.

Other cases could provide a greater challenge for the courts. Drobac noted the vaccine Gardasil, which is used against the spread of the human papillomavirus that has been linked to cervical cancer. Some people believe this medication could encourage promiscuity in girls and object to the vaccine because of religious morality.

Drobac said the courts could have a difficult time determining if the government has a compelling interest in preventing cancer.

Agreeing to be sued

Lambda Legal has had “extended conversations” with callers about Indiana’s law but, Taylor said, the organization is still exploring if it will file a lawsuit challenging the statute.

After the fix was announced, the nonprofit issued a statement saying the bill reduces the threat to LGBT Hoosiers but is far less than the situation requires. Two things had to be included in the fixes to satisfy Lambda Legal, Taylor said. First, the new language must prohibit discrimination on the basis of sexual orientation or gender identity. Second, the state’s civil rights law must be amended to provide protection for LGBT members.

Many opponents of the law have called for Indiana’s Civil Rights Act to be expanded to cover gays, lesbians, bisexuals and transgendered people. However, Drobac highlighted a wrinkle she sees in the act.

Indiana Code 22-9-1-16 holds that a plaintiff can only file a civil action if the defendant agrees in writing to have the claim decided in a court of law. The requirement of having written permission before getting protection against discrimination makes the state’s civil rights act toothless, she said.

During the fight against Indiana’s RFRA, many said under the law that bakers would be able to refuse to make wedding cakes for gay couples. Invoking that example when speaking about civil rights, Drobac asked, “How many bakers are going to agree that fornicators can sue them?”•