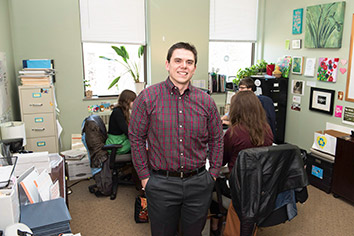 With grant money in hand and extensive experience helping troubled homeowners, the Neighborhood Christian Legal Clinic launched a program to work with neighborhood associations around Indianapolis to find ways to tackle the vacant housing problem.

Initially, the clinic joined with neighborhood associations to determine what legal mechanisms could be used to remove the blight, explained the clinic’s Executive Director Chris Purnell. But the neighbors and attorneys soon realized rehabbing a house ultimately requires someone with money.

The clinic then began encouraging the neighborhood associations to do what they could, like rake leaves and mow the lawns of the empty houses, to improve the situation. Although the grant has ended, Purnell is not ready to leave.

Instead, he wants to explore community lawyering. He sees the possibility of the clinic building long-term relationships with the neighborhoods, listening to the residents’ concerns, and thinking critically about how to deal with the issues.

He calls his vision “very pie in the sky,” but it is an example of the nimbleness which the Neighborhood Christian Legal Clinic must have to respond to the changing needs of the community. It is also an example of the creative thinking and innovation Purnell brings to his new job leading the clinic.

Just the third executive director since the clinic opened in the Mapleton-Fall Creek neighborhood of Indianapolis in 1994, Purnell was officially named to the top job in February, but he had been serving as interim director since the former director, Josh Abel, left in August 2014.

His plans for the clinic’s future focus on deepening its connections to the neighborhoods and maintaining it faith-based approach.

John Hoard, attorney at Rubin & Levin P.C. and treasurer on the clinic’s board of directors, echoed Purnell, saying the clinic tries to walk and talk the faith of helping others in need. To do that, the organization must be able to anticipate and quickly adjust its programs to provide the services for whatever the crisis requires.

As the economy began collapsing and homeowners got underwater, the clinic beefed up its housing program. Now, the agency is gearing up to respond to pending changes in immigration. The clinic already provided legal representation for immigrants, but the need grew when President Barack Obama signed an executive order in November that would allow undocumented workers who meet certain requirements to stay temporarily without fear of deportation.

The agency had been meeting with different immigrant aid organizations to plan public information sessions to explain the changes and to handle the expected flood of applications. After a federal court stayed the implementation of the executive order, the clinic had to pivot to address a new problem – individuals who were defrauding immigrants by offering relief from deportation in exchange for money.

“Of course they’re total shysters,” Purnell said, “but they’re preying on the people who just have a hope and a dream.”

The clinic has since dedicated a phone line to providing up-to-date information and held town-hall style meetings with immigrants around the state.

The clinic is starting a financial literacy program called Building Wealth. Purnell explained the idea was born after seeing some bankruptcy clients or foreclosure prevention clients again get into money trouble. The goal, he said, is to help clients learn how to manage their money to avoid financial woes.

“I think that helping the individual with their legal issue, that goes a long way toward helping that individual flourish and making sure they don’t have to deal with the stress and, frankly, with the injustice of being the victim of something,” he said.

To help that focus on the individual clients, Purnell is turning his attention to the intake sites in Indianapolis as well as Fort Wayne, Madison and Terre Haute. These are places nestled in neighborhoods where people can go to apply for legal assistance and meet with volunteer attorneys to get some answers to their questions.

He wants to shorten the wait times at the sites, provide more information and advice so clients can do some things on their own, and make sure the intake centers are welcoming places so clients do not feel intimidated.

Kuzma, now Indiana deputy attorney general, seconded Purnell’s plans for the intake sites, noting the centers help the clinic go to the clients instead of waiting for the clients to come. She also applauded his focus on programs that give comprehensive service to the clients.

“Chris is not all by himself, he has a staff that is great,” said Kuzma, who also serves the nonprofit’s board. “Chris is doing the big picture, figuring out how they are going to respond to the need and trends we see.”

Purnell had planned on going into private practice but an internship at the clinic and a job offer after he graduated from law school in 2008 changed his career path. In 2010, he was named managing attorney.

Neighborhood Christian Legal Clinic board chair Jenifer Brown, partner at Ice Miller LLP, said Purnell is well-positioned to lead the agency not only because of his tenure there but because he has brought a fresh perspective and is well-engaged with the community.

Both Kuzma and Brown noted Purnell has been very successful at soliciting contributions from private and corporate donors. The clinic still relies on grants, but the individual gifts usually come with fewer restrictions and allow for greater flexibility in their use. At present, the organization is in a healthy state.

“I think that the clinic is thrilled to be serving the legal needs of the community, and I think we will continue to do that,” Brown said.•