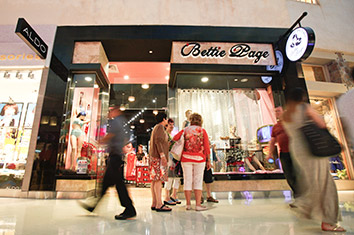 Bettie Page’s name and image popularized by once-scandalous pinups from the 1940s and 1950s remain hot properties still able to stir up trouble.

“We took the unusual step of terminating a program that was out there that involved quite a few retail outlets involving the Bettie Page brand,” said Roesler, who represented Page’s IP rights before she died in 2008 and continues to license her name and likeness around the world. “That was not an easy thing for a brand owner to do, so from our standpoint, we were concerned about various things.” 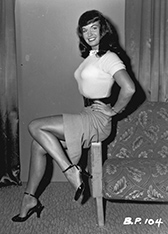 Lawsuits and recriminations are ongoing between the Carmel-based owner of Page’s rights of publicity and the designer and company that launched the chain and branded apparel named for the late pinup icon, shown here in a photo from the 1940s. (Photo courtesty of CMG Worldwide Inc.)

Roesler said retro clothing is a hot trend, particularly with celebrities such as Katie Perry and Madonna fashioning their styles on icons like Page and other pinups of the past.

At one time, there were 17 Bettie Page retail stores from Tampa to San Diego, plus the Internet domain bettiepage.com that sold 1940s- and 1950s-inspired women’s apparel under the proprietary label. But in early 2014, licensee Design Technology Holding LLC, owned by Khomyakova and Glaser, was unable to keep up with annual royalty payments – $25,000 per Bettie Page store, plus 4 percent of Internet sales. CMG contends in court papers that it was informed the licensee “would no longer pay royalties due.”

Washington, D.C., attorney Mario L. Herman represents the licensees and said there were challenges in the market including a terrible winter that caused a delay in royalty payments. “There was never a decision to stop paying,” he said, noting the licensees wanted to work out a plan with CMG to keep the agreement.

Instead, CMG sued, obtaining a temporary restraining order that forced the licensees to dissociate from the Bettie Page name, hand over the bettiepage.com Internet domain, and cease marketing the product line.

Many of the former Bettie Page stores continue in operation but have been rechristened as Tatyana stores, selling retro apparel designed by Khomyakova.

“We have reason to believe and some evidence that (CMG was) trying to go behind us and have other people get involved in the retail establishments of Bettie Page,” Herman said. His clients filed an 87-page counterclaim against CMG, alleging that the delay in royalty payments was a pretext for terminating the licensing agreement to “capitalize on the millions of dollars spent … in building the Bettie Page brand name.”

It was a brand the defendants had to dissociate themselves from in every way.

“We did our Herculean best to identify everything” bearing the Bettie Page name or image and remove it from stores, websites, promotional materials, storefronts and brand identification, Herman said, estimating that process cost at least $750,000.

The effort, though, wasn’t sufficient. CMG noticed a trade show poster and some Web content continued to carry the name, and a vacated storefront retained a Bettie Page logo. On April 3, Judge Sarah Evans Barker of the U.S. District Court for the Southern District of Indiana granted CMG’s request for sanctions of reasonable legal fees and costs in bringing the action, which will be determined. But CMG wasn’t awarded the sanction it sought of $50,000 to $70,000 per month that the violations occurred.

Magistrate Judge Tim Baker prepared the recommended order of contempt and sanctions that Barker approved. “The majority of the issues before the Court on this motion could have been resolved without the Court’s involvement if the parties would have just picked up the phone and talked with one another,” he wrote.

Separately, CMG’s outside counsel, Theodore Minch, also is facing possible sanctions after a securities lawsuit filed against Glaser, Khomyakova and Tatyana Designs was dismissed. “This was a public company and we aggressively went after them on that basis on an SEC allegation,” Roesler said. “We were disappointed in that ruling.”

Minch did not respond to a message seeking comment.

Herman called the dismissed suit “a trumped-up charge. … Our position is the outside counsel is just trying to bury us in paperwork.”

That suit alleged the principals in publicly traded Tatyana Designs Inc. failed to disclose to stockholders the termination of the Bettie Page licensing agreement in violation of SEC rules. Tatyana Designs is an over-the-counter stock that’s not subject to such disclosure requirements, Chief Judge Richard Young in the Southern District of Indiana wrote in dismissing the suit.

“In conclusion, the court finds CMG’s attorney failed to conduct a reasonable investigation into the factual and legal bases” for counts raised in CMG Worldwide v. Jan Glaser, Tatyana Khomyakova, et al., 1:14-CV-928, Young wrote. “Had CMG’s attorney done so, he would have realized that the … claims were not objectively warranted by existing law or a good faith argument for the extension or modification of the law.

“The record presents sufficient evidence for the imposition of Rule 11 monetary sanctions against CMG’s attorney,” Young wrote in an order last month. Parties are briefing the issue as sanctions in that case remain under advisement.

Roesler said CMG is pursuing litigation even though he worries, “We have to sort out whether it’s worth spending good money to go after bad, and we don’t know if they’re (Tatyana Designs) viable.” He noted a steep decline in Tatyana Designs’ share price to a recent 19 cents compared to trading around $1.70 last May.

The bettiepage.com website now lists CMG Worldwide as the contact, and a different maker now is marketing clothing under the Bettie Page label. “It’s one of those things in the business world where you lick your wounds and move on,” Roesler said.

Bill Uglow, CMG executive vice president, is developing a new Bettie Page store that should open in Las Vegas in the second quarter of this year. The short term design is for about 10 stores, with possible long-term global growth to about 50 outlets.

“We want the market to be able to participate more fully in the development of Bettie Page – in other words, we would be open to opening a store in New York with an entrepreneur, a store in Phoenix with another entrepreneur,” Uglow said. “We don’t feel the need today to lend rights to one, single, exclusive store operator.”

Uglow, a former Disney licensing executive, also said Bettie Page will make a leap into the 21st century at the International Licensing Expo this June in Vegas, where she will appear on the convention floor in high-resolution hologram form.

“There’s a cultural genre in America I refer to as retro-vintage-rockabilly-pinup,” Uglow said. “Bettie Page is the leader of that genre.”

Herman said Tatyana Designs retains ownership of the designs that were created for the Bettie Page label, some of which now are sold under the Tatyana brand name. “That line has emerged as a very strong line,” he said.

“There was never an allegation by them in any capacity we weren’t producing quality stuff,” Herman said. “We believe CMG and Roesler are still trying to use the legal system to hurt us in a competitive situation.”•