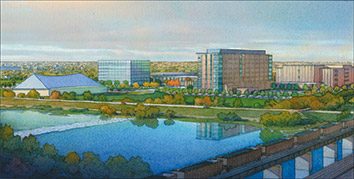 Editor’s note: The Indianapolis City-County Council did not call the proposal for a vote April 20. Read more.

Nearly a year-and-a-half after Indianapolis Mayor Greg Ballard, Marion County Sheriff John Layton and other community leaders laid out a vision for an Indianapolis criminal justice center, its future is clouded as late opposition resulted in a major setback to the plan.

An Indianapolis City-County Council committee on April 14 rebuffed the proposal for a $1.6 billion project that advocates say is desperately needed to replace an aging, inefficient jail as well as centralize criminal courts and ancillary offices.

“While we are certainly disappointed … we look forward to continuing to work with councilors on this important initiative to solve an issue that has faced our community for three decades,” Deputy Mayor David Rosenberg said after the committee vote.

The selected developer, WMB Heartland Justice Partners, would receive annual payments over 35 years from the city to finance, build, operate and maintain the facility under a proposed public-private partnership. The city says efficiencies gained from consolidation would result in cost savings sufficient to finance the project. Annual city payments to WMB would start at around $46 million in 2019 and escalate to more than $65 million at the end of the contract.

But several council members balked after a fiscal analysis cast doubt on administration claims that the project could be paid for without raising taxes. Opposition grew when Democratic mayoral candidate Joe Hogsett urged a delay of the vote until after the next election and Democratic Marion County Prosecutor Terry Curry announced opposition to the project. Ballard, a Republican whose term expires at the end of the year, is not seeking re-election.

Some grassroots activists say that in all the political and fiscal analysis of the proposal, something more elemental has been missing.

“With everything we’ve looked at in terms of the proposed center, the discussion has been about bricks and mortar and the financial aspect. There’s been nothing about the community or the human element,” said Alex Slabosky, a volunteer with the Indianapolis Congregation Action Network, known as IndyCAN. He said the city’s incarceration rate is already well above the national average, and roughly 7 in 10 people in the Marion County Jail are there awaiting trial. He said the proposal’s plan to add 1,000 beds runs counter to criminal justice trends.

Slabosky points to cities such as Portland, Oregon, where jail facilities expanded in recent years now sit vacant and for sale with few viable options for reuse. The Wall Street Journal reported recently that more than two dozen jails and prisons have been closed in recent years in large part due to reform of drug laws and sentencing that favors treatment over institutionalization.

“We agree there needs to be a new jail and justice center,” Slabosky said. “We think the question that should have been asked was how do we reshape our justice system to reduce the level of incarceration in Indianapolis, provide alternatives for people who are mentally ill, have a substance abuse problem, or are homeless?” 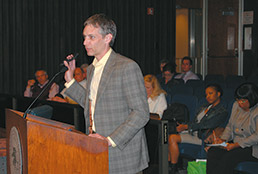 Indianapolis City-County Councilor Jeff Miller represents the district where the proposed justice center complex would be located. He says the proposal would spur economic development in a long-neglected part of the city and open up prime downtown land for new uses. (IL Photo/Dave Stafford)

The Indianapolis Chamber of Commerce and the westside neighborhood group where the facility would be located on the site of the former General Motors stamping plant were among organizations that officially endorsed the proposal. Numerous business and labor leaders also spoke in favor of the complex that they say would provide a needed boost for the local economy.

“The criminal justice center is the kind of infrastructure project that moves great cities forward,” John Griffin, president of the Central Indiana Building and Construction Trades Council, testified before a council committee that on April 8 endorsed the plan.  “Two-thousand construction workers will be needed.”

Republican Councilor Jeff Miller represents the district where the complex would be built and said residents gradually warmed to the proposal as an economic development catalyst for a long-neglected part of the city. He said downtown also would get a boost from the project.

“When the jails are gone,” Miller said, “that will be prime property to redevelop.”

Curry, though, questioned removing offices such as his, the public defender and probation from the downtown core along with the courts and jail. “Has anyone ever done an analysis of the economic impact on downtown?” he asked.

Curry also was concerned that the plan before the council did not include the law office building that would house his office along with space for the public defender and probation departments.

Rosenberg said that building would be bid separately and come before the council for approval at a later date. He estimated the building would add $35 million to $40 million to the overall cost of the complex, but a city feasibility analysis conducted in 2013 pegged the cost at $54 million.

The initial request for proposals issued by the city to potential developers included the law office building, but it was later removed from the RFP. Curry and Marion County Chief Public Defender Bob Hill said that was cause for concern.

Hill supports the justice center, but said he had concerns that his office, the prosecutor’s office and the probation department are not included in the design as currently before the council.

“Something may change, who knows what may happen, and I’ve expressed those concerns. We certainly need a new justice center,” he said, “but without the presence on campus of the prosecutor, public defender and probation, it’s going to make it inefficient, if not unworkable, for us.”

Marion Superior Judge John Chavis, who chairs the executive committee that oversees court operations, said the prosecutor, public defender and probation offices need to be included in the complex for the sake of efficiency.

Rosenberg said the law office building was separated from the main complex proposal because it could be paid for over a shorter period and local contractors would have a better shot at bidding on the work. He said concerns about the separate procurement process were unfounded and that the building would open at the same time as the jail and courthouse complex.

But City-County Council Chief Financial Officer Bart Brown said the current plan for a law office building could be problematic because it also envisions space for commercial retail space.

“Once you include the private sector, you lose the ability to issue tax-exempt bonds,” Brown said. He said it’s not a certainty that the council would endorse construction of the law office building. “There is not a lot of momentum on this,” he said.•