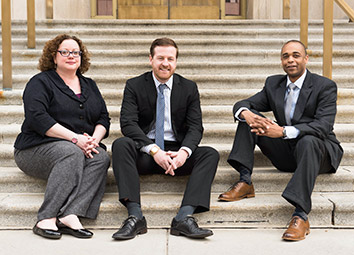 When a former grocery store manager filed a pro se complaint against the supermarket where he had worked, he had a viable discrimination claim. What he did not have was a good idea of what the case was worth.

The African-American man alleged the grocery chain had put him in a store where he was subjected to racially motivated harassment. Although he asked to be relocated, the retailer kept him in that spot for more than a year with the situation becoming so bad that he had to seek mental health counseling.

Once a settlement conference was scheduled, the man got some unexpected help from attorney Edward Thomas who had been appointed as pro bono counsel through the Mediation Assistance Program offered by the U.S. District Court for the Southern District of Indiana.

The Southern District is trying to put as many civil cases as it can into mediation, according to Magistrate Judge Mark Dinsmore. Before the opposing sides file dispositive motions, the court has the parties attend what is typically a half-day session where they try to reach an agreement on their own.

Unrepresented individuals face a lot of hurdles when they litigate their own case, Dinsmore said, but one of the biggest obstacles is putting a value on their complaint.

“Without a lawyer, they’re really flying blind,” Dinsmore said. “They have no idea what their case is worth.”

Like other pro se litigants in MAP, the former grocery employee had unrealistic expectations of what he could recover. Thomas, as he does with all his MAP clients, explained to the man the standard a claim must meet to be viable under the law. Thomas passed along printouts of other select employment cases which showed, despite outrageous behavior, the company was able to obtain summary judgment. Then Thomas linked that to the economics of the litigation.

Going into the conference, Thomas, an associate at Lewis Wagner LLP,

took significant time advising his client of the best-case scenario for a recovery amount. However, once the plaintiff was offered more money than anticipated, he entertained the idea of moving ahead with the trial, thinking he would get a larger recovery.

The talks ran over the three hours that had been scheduled, but the worker eventually accepted the store’s offer and settled for a substantial amount. Afterward, he thanked his attorney.

“Makes you happy to be a lawyer,” Thomas said. “It’s very, very rewarding.”

However, Craig Wiley believes even if the two parties are not successful in finding common ground, the conferences can break the ice and lead to an agreement later. Through the mediation, the opposing sides learn about each other’s arguments and what aspect of the case they are spotlighting. This can help draw the parties together and after they think things over in the subsequent days, they are more likely to reach a resolution.

Wiley, an attorney in the Indianapolis office of Jackson Lewis P.C., clerked for Southern District Magistrate Judge Tim Baker. He watched how pro se litigants struggled to get their cases resolved. The Mediation Assistance Program provides a valuable service to these plaintiffs, he said, and enables attorneys to give back by assisting the court.

Typically, pro bono attorneys are appointed about 30 to 45 days in advance of the scheduled settlement conference. They have the opportunity to meet or at least talk to their clients to discuss the case, review the mediation process and talk about what a reasonable settlement amount would be.

“I believe mediation and settlement are really what the system needs,” said Alan McLaughlin, office managing shareholder at Littler Mendelson P.C. in Indianapolis. “To go to trial is a very inefficient way to resolve a dispute.”

He volunteered when MAP started and has since assisted on nearly 10 cases.

McLaughlin said many times he works to help these clients understand while they may feel wronged, their claims may not have much legal merit and they are not likely to get a bunch of money. Getting his clients to be more analytical instead of emotional about the dispute takes the settlement talks to a more substantial level, he said.

Most of the pro se litigants have accepted the offer of help from volunteer attorneys to navigate the conferences and they are happy when a settlement is reached, Dinsmore said. The litigants do feel that they have had their day in court.

“The goal is trying to make sure the litigants feel like they had somebody listen to them,” the magistrate judge said.

Giving these plaintiffs an opportunity to tell their stories and having the judicial system listen is the most important thing about this pro bono project, said Monica Foster, executive director of the Indiana Federal Community Defenders.

“It’s just amazing what these lawyers are doing on behalf of some of the most despised people in our society,” she said.

Representing these clients in the conferences can not only bring a settlement but also convince the defendants to change the way they treat people, Foster said. Mediation agreements can prevent the opposing side from treating others in the same hurtful or unlawful manner.

During the settlement talks, the attorneys are in an advisory role only. The clients make the final decision on whether to take or reject the offer. Regardless of what the client decides, the attorney’s service ends with the conference.

Attorneys can opt to continue representation, as Brett Buhl is doing with his first MAP client. The Ogletree Deakins Nash Smoak & Stewart P.C. associate is helping a plaintiff convicted on drug charges who is seeking restitution for the damage to his home and business caused by law enforcement agents when they were searching for illegal substances.

Defendants argue the claim is barred by Heck v. Humphrey, 512 U.S. 477 (1994), which limits an inmate’s pursuit of civil damages if harm caused by the actions could render the conviction invalid. But Buhl countered his client’s case is an exception because it is solely focused on his personal property and not his criminal conviction.

The conference was not successful, but a few days later the opposing attorney called Buhl with the news his clients were willing to make a higher offer. A complicating factor is the client’s hesitancy to settle and end the case that has become his life while he serves his term behind bars.

“I’m hopeful, not confident,” Buhl said of reaching a settlement.

The conferences can be intense since the pro se litigants often try to make the most use of the time by quizzing their pro bono counsel about the potential next steps like subpoenas and jury arguments, said Amanda Couture, associate at Ogletree Deakins in Indianapolis.

With their attorneys, the clients have someone they can trust who will tell them what their rights are, explain the process, work to get a settlement and decipher the language in the agreement, she said. This, in turn, takes some of the emotion from the conference.

“Our federal courthouse is beautiful, but it is intimidating,” Couture said. “It has giant hallways and big staircases. If someone has not been there before, it can be daunting. When they have someone tell them what to expect, it gives them confidence.”•