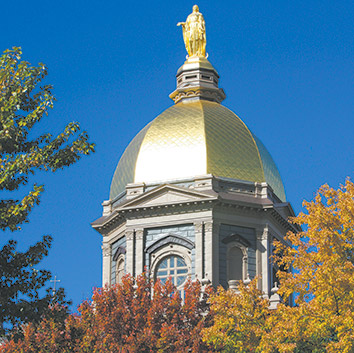 In a second round of oral arguments regarding the University of Notre Dame’s challenge to the Affordable Care Act’s contraception mandate, the 7th Circuit Court of Appeals not only remained dubious of the school’s assertions but also seemed perplexed as to why the case came back to the court.

Notre Dame appeared before the appellate court about a year ago to ask for a preliminary injunction against having to comply with the mandate that provides contraceptive coverage for employees and students. The South Bend private university filed a complaint in U.S. District Court for the Northern District of Indiana in 2013, claiming the mandate violated the school’s religious beliefs.

EXTRA
Click here to view a timeline of Notre Dame’s attempt to be exempted from the contraception mandate.

Judges Richard Posner, David Hamilton and Joel Flaum, who considered Notre Dame’s first appeal in 2014, sat for the remanded appeal in April. A year ago, the panel split with Posner and Hamilton ruling the Catholic university was not entitled to temporary relief from complying with the mandate. Flaum dissented, countering Notre Dame made a credible claim under the Religious Freedom Restoration Act of 1993 and should be granted a preliminary injunction.

During the most recent arguments, the panel pondered several times whether the case should return to the District Court to develop the record more fully on the issues of substantial burden and strict scrutiny. It also wondered why the Supreme Court granted the university’s petition for writ of certiorari and threw the case back to the 7th Circuit. None of the judges could see anything in the Hobby Lobby decision that would alter their previous ruling regarding Notre Dame.

“They want us to say what we said before?” Flaum posed.

Stern responded that what the court said before is very much an option.

Many are confused over how the decision in Hobby Lobby affects the challenges put forth by Notre Dame and other religious organizations about the contraception mandate.

“I’m just not sure Hobby Lobby changes anything here,” said Steven Schwinn, associate professor at The John Marshall Law School. “In particular, Posner seems to be asking the same questions he asked the first time around. I just don’t think Notre Dame has any better argument after Hobby Lobby than it did before Hobby Lobby.”

The Supreme Court found in Hobby Lobby that requiring a private business to offer health insurance that includes coverage for birth control violates religious freedom. The government has revised its policy and developed an accommodation so that businesses, just like religious groups, can opt-out of the mandate and allow a third-party administrator to supply the coverage.

Before the 7th Circuit, Notre Dame’s attorney, Matthew Kairis of Jones Day in Ohio, repeatedly asserted the school wants to be exempted from the mandate and from having to file the form which triggers its insurance provider to pick up coverage.

The university argued that even though the accommodation absolves the school from paying for coverage, having to submit the form makes the school complicit in supplying the birth control. Prior to the ACA, Notre Dame did not include birth control in the insurance it offered to students and employees.

“Hobby Lobby confirms Notre Dame’s religious belief controls and it believes that the acts mandated by the accommodation are connected in a way that is sufficient to make it immoral,” Kairis said.

However, Posner disputed that Notre Dame was in any way involved since the contract for contraception was between the insurer and the student or employee. He also questioned the court’s ability to alter the contract.

“Again, the answer is because Notre Dame would have a continuing relationship with Aetna,” Kairis said.

“But so what?” Posner countered. “Aetna’s status would have changed from a party contracting with the university to provide contraception to an intermediary between the government and Notre Dame.”

Schwinn is also skeptical of Notre Dame’s argument that the accommodation is impinging on its religious freedom. Although Kairis made a passionate argument during the 80 minutes he was given to present the university’s case, Schwinn anticipates the panel will issue a quick decision that reaches the same conclusion as its first decision in the dispute.

If the 7th Circuit reverses its earlier position, the consequences would be wide reaching.

“If court ends up accepting Notre Dame’s argument, I do think we are in a new kind of world of what religious liberty means,” Schwinn said, adding the definition of religious freedom would be much expanded.

“If the 7th Circuit does rule in favor of Notre Dame, that would be a substantial expansion beyond the Supreme Court’s ruling in Hobby Lobby,” he continued. “If the court knocks out the accommodation as being insufficient, then the government is going to be hard pressed to provide contraceptive coverage to employees unless (the government) could come up with some other work around. … I’m not quite sure how that would work.”

Posner also seemed unconvinced that Notre Dame’s religious beliefs concerning contraception were part of Catholic doctrine. He pointed out that other Catholic schools like Georgetown University and Boston College have not raised objections to the mandate.

The question came back later during the argument. In discussing the court’s duty to balance the government’s interest in supplying contraception against the university’s belief, Posner speculated the government would say using existing insurers is more efficient.

Kairis maintained that the government cannot say what is most convenient meets the strict scrutiny standard.

“I don’t agree with you. The interest you assert is weak because this is not Catholic doctrine, this is some Notre Dame thing,” Posner said.

Kairis shot back, “That’s a pretty dangerous determination to make from the court as to whether Notre Dame’s religious exercise is weak.”

“What about the other schools going along with this mandate, aren’t they to be considered?” Posner responded.

“Well, I don’t think you’d say that about the religious beliefs of ISIS,” Posner replied, referring to the terrorist organization, the Islamic State.•