From Johannes Brahms’ “Hungarian Dance No. 5” to Robin Thicke’s “Blurred Lines,” what’s legal and what isn’t when it comes to musical performances shared center stage with the Time for Three trio during Indianapolis’ World IP Day event April 27.

The Indianapolis Symphony Orchestra’s resident ensemble performed mashups of public domain works. Violinists Zach De Pue and Nick Kendall and double-bassist Ranaan Meyer blended the sweeping Brahms masterpiece seamlessly into “Hava Nagila,” then “If I Were a Rich Man,” popularized in the Broadway play and film “Fiddler on the Roof.” 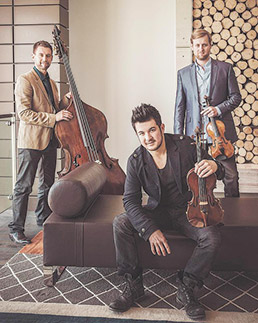 Members of the trio also shared their experiences about gaining copyright protection of their own arrangements that creatively combine such works, and they talked about the challenges facing music as intellectual property in the age of Internet media file-sharing.

Faegre Baker Daniels LLP partner Amie Peele Carter presented her own mashup – a YouTube video blending “Blurred Lines” with the song a jury recently determined it infringed, Marvin Gaye’s “Got to Give It Up.” The jury awarded damages to Gaye’s family of $7.4 million.

Copyright law, Carter said, is constantly changing. But as a general rule regarding music, works before 1923 are in the public domain.

Indianapolis was one of 17 cities internationally to host a World IP Day event, which Carter said aimed to celebrate the protections provided by law to creative works and the sound policy reasons for them. FaegreBD, which boasts a large IP practice, sponsored the event along with ISO and Centric, which advances innovation in Indianapolis.

“It remains important to strike a balance between rewarding artists for their valuable contributions, while also compensating the efforts of those that make that music available to fans and the listening public,” Carter said.•