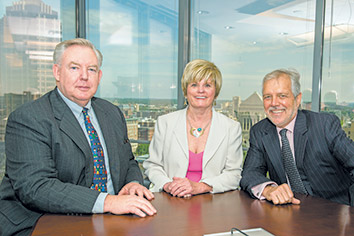 Between them, the three defense attorneys have handled a range of cases from murder and the death penalty to fraud, civil business litigation and even treason. But on a recent morning, the trio of legal minds was gathered around the conference room table discussing the most pressing matter of that day – office furniture.

Robert Hammerle was trying to keep his desk from being thrown into the landfill. After more than 40 years primarily in either a small office or solo practice, the criminal defense attorney has joined the Indianapolis firm of Pence Hensel LLC as of counsel.

The career move requires that Hammerle physically relocate his furniture, framed movie posters and two aquariums into the firm’s 16th floor suite. To prepare for their colleague, the firm’s founders, Linda Pence and David Hensel, are knocking down walls and creating space especially for Hammerle.

“I’m building him a desk, I’m getting him a new office,” Pence said.

But Hammerle’s old desk was emerging as a point of contention. He bought the desk 25 years ago, later complementing it with a credenza. They do not match and over the years have become battered and scuffed.

“The only reason they look half way decent is because his office is so dark,” Pence said. “But if you brought (them) into an office that is more modern and has lots of light, (they) just wouldn’t do.”

“I think it looks great,” Hammerle argued. “If it won’t work, it won’t work, that’s fine by me, but I would like to figure out where it’s going. I’m not just going to dump it.”

Pence offered a compromise. “Well, we’ll redo it,” she said. “I’m thinking about refinishing it and we’ll put it somewhere.”

The conversation turned from furniture to their new partnership. Stories and observations punctuated by one-liners flowed for more than an hour as the three talked about the rewards of defense work, the demands and what the future may hold.

Pence has been friends with Hammerle since the mid-1980s when she hung out her shingle as a criminal defense attorney. She had just moved back to her hometown of Indianapolis after a 13-year stint in Washington, D.C., and did not realize that opening her own office in a city where she had never practiced was a risky proposition.

Most of the defense bar gave the new woman a chilly reception, but not Hammerle. Pence recalled he went out of his way to help her get started in practice.

Hensel joined Pence in 1990. He had started his career in Washington, D.C., and upon returning to Indiana, he began calling Pence to try to get an interview. Initially Pence did not have time to meet with Hensel, but through his persistence, he charmed her secretary who convinced Pence to make room in her calendar.

During their first meeting, Hensel told Pence he really wanted to work for the U.S. Attorney’s Office. But since that agency had no openings, he decided to ask her for a job.

“So then I hired him,” Pence said. “I don’t know exactly what I was thinking but obviously it’s worked. It’s been a good partnership through the years.”

The addition of Hammerle to the team, which includes two other attorneys, Pence said, gives the firm another level of sophistication. Pointing to their practice areas and experience, she believes the three of them, together, have handled every kind of criminal and civil case.

Hammerle has practiced his entire career in Indiana. He has represented clients in more than 100 jury trials and has helped secure not-guilty verdicts in both state and federal courts. Pence Hensel focuses on complex litigation in both criminal and civil matters.

Pence and Hensel said they couldn’t discuss the case that best exemplifies their work. Their client had been facing federal indictment, but the pair delved into the complicated subject matter and was able to convince the federal government not to prosecute.

Among their high-profile successes has been Hensel’s work in getting federal charges dropped against a former Eli Lilly scientist who had been accused of stealing trade secrets. Pence was in the spotlight when she defended Bei Bei Shuai, an Indianapolis woman who was charged with murder and attempted feticide following the death of her newborn daughter. Eventually the murder charge was dropped, and Shuai pleaded guilty to criminal recklessness.

“You get so impassioned and empowered, you want to work for this person and you’re not thinking about what’s in it for me,” Pence said. “It’s just the legal issues themselves are so important and the factual issues and that client is important that you just go all out without thinking about whether it will impact your life in a bad way.”

The work is demanding and unpredictable, often requiring the attorneys to upend their schedules and sometimes forgo social plans. Still, Hensel said, litigation can be personally fulfilling. The reward is getting a phone call from someone asking for help and then being able to help that individual.

Hammerle pointed out sometimes reputations can get overblown. He recalled being in court and having a wonderful plea offer that his client refused to accept. Bewildered, Hammerle dragged the client into the hallway of the courthouse and asked why he did not want the offer of home detention.

“He looked at me, there’re people standing around, and he goes, ‘You’re Bob Hammerle, you can do better than this.’”

Attorney and client went back into court and took the plea.

“He realized Bob Hammerle couldn’t do any better,” Pence quipped.

“No I couldn’t,” Hammerle deadpanned. “I’m a limited soul. Look the other way.”

Explaining why he decided to join Pence Hensel, Hammerle turned to his favorite subject – movies. He had worked with the two in the past, and he was lonely practicing by himself. When the conversation started about teaming up, something just clicked.

Hammerle, who regularly writes movie reviews, compared his realization to the discovery of the “big W” in the 1963 comedy, “It’s a Mad, Mad, Mad, Mad World.” The characters were all searching for buried treasure under a big W.

“It’s like me waking up,” Hammerle said. “I’m hunting for the big W and I look around and there it was. For me it was the big W.”

Hensel looked at Pence and told her, “You can be the big W, I don’t want to be the big W.”

As long as the passion and commitment to the work is there, they said, and as long as they can help clients, they will be litigators. Pence said she is motivated by knowing an interesting case – perhaps one of first impression or a fact situation that has never been tried before or a statute that has not been tested – could walk through the door at any time.

“The question about what’s in the future, well you know, I don’t know and that’s why I get up and come to work because there is going to be something else, and I’ll keep coming in as long as it’s interesting,” she said.

Part of the remodeling project to make Hammerle’s office also includes creating a litigation preparation room. This will be a space, Pence explained, where the attorneys will be able to spread out documents and exhibits while they get ready for trial.

Talk of the additional room gave Hammerle one last chance to plead his case. “That would be the perfect spot for my desk,” he suggested.•