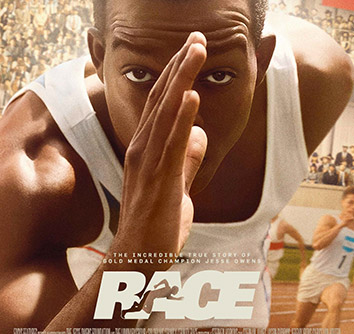 An Indiana company had a big role in telling the story of one of the most influential track athletes of all time through a recently released movie.

“Race” tells the story of track athlete Jesse Owens, who overcame racism and hatred and became the first American athlete to win four track-and-field gold medals at a single Olympics. What’s more is he did this in 1936 in Berlin, Germany, as Adolf Hitler and the Third Reich were in power.

Luminary Group, a licensing, consulting and intellectual property management company, had just about as big a role in the way the film turned out as the director and actors in the movie. The Shelbyville company manages the intellectual property rights of Owens, as well as other famous athletes such as Babe Ruth and Satchel Paige in baseball and Johnny Unitas and Vince Lombardi in football.

It was Luminary Group’s job to make sure Owens’ story was told in a way his three daughters, who are now in their 70s, would be proud of. Jonathan Faber, CEO and general counsel of Luminary Group, said that meant plenty of negotiations and meetings.

“The production company wanted the family to be intimately involved in the process, and they wanted the story to be told accurately, not to portray him as something he wasn’t,” Enfield said. “That meant finding the right actors and director, and lot of things have to come into place.”

Faber said Luminary Group needs to be well-versed on copyright and trademark laws to protect the character and reputation of its clients.

“The fulcrum point is knowing what an agreement like this should look like,” Faber said. “What is the value of the Owens family’s involvement and blessing, and what vicinity we should be in.”

Faber said that’s where the skill level of the people involved comes into play.

“We’re in the business of making deals work, and that’s certainly at times unflattering,” Faber said. “It’s not objective. We need to make sure the use of the character isn’t problematic.”

Faber declined to get into specifics about what legal challenges were faced in making the movie, but said generally his work involves a lot of expert witness interviews, determining what a character is worth, and finding and prosecuting people who misuse any of their clients in a number of ways.

“We use a lot of the legal skill-set to determine market value of a character,” Faber said. “If there were no market value, there wouldn’t be a need for our character to be protected.”

Part of protecting the Jesse Owens character was finding the right actor to play him, and both Faber and Enfield felt Stephan James was the man to do that. After that, it was finding the correct director and writing team and the proper funding and distribution throughout the process.

“We have to hit all of those benchmarks, and only at that point can we start exchanging drafts of the script. That’s where the rubber met the road and that’s where the family’s knowledge was crucial in bringing the story to life,” Enfield said.

Faber said the group “was certainly holding its breath” during the first showing of the film, but was very pleased with the outcome, as was the family.

“It hits a lot of nerves and it’s timely on a lot of levels,” Faber said. “It’s great to know we did a very good job and we’re happy with the result.”•