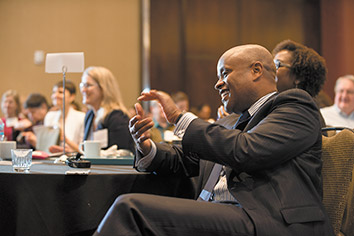 Her long and busy day had just kicked off, but Dr. Lealah Pollock took a few moments to talk about what she hoped to accomplish in Indianapolis before catching the red-eye flight back to California at 6 the next morning.

A physician and assistant professor of family and community medicine at the University of California, San Francisco, Pollock was among the more than 400 medical professionals, attorneys and social workers who came to Indianapolis this month for the 2016 National Medical-Legal Partnership Summit.

She was attending with three of her colleagues from the medical-legal partnership formed recently between the Family Health Center at the Zuckerberg San Francisco General Hospital and Bay Area Legal Aid. Pollock was hoping to connect with more established partnerships to learn how her team could improve patient outcomes, identify legal problems that harm patients’ health, and show the health system the partnership was helping the bottom line.

Certainly her time in the Circle City was no vacation.

“I have a lot to learn both from the medical providers and attorneys who are here,” Pollock said.

The National Center for Medical-Legal Partnerships, which organized the 2016 summit, is one of three legal-oriented associations that recently chose Indianapolis for its annual convention. In November, the National Legal Aid & Defender Association will be here, and in August of 2015, the Conference of Court Public Information Officers visited.

Organizers of these conferences said Indianapolis has what they need — an easily accessible airport, hotels that are big enough to house the association members and the meetings, and a variety of restaurants and bars that are nearby so conference attendees can network at the end of the day. Also, the price was manageable for members who are largely from the public sector and have to adhere to strict budgets.

The NLADA wanted to have its 2016 conference in the Midwest and was drawn to Indianapolis by its strong reputation as a convention city, according to Maria Soto, the association’s senior vice president of operations.

“There’s a lot being done to bring conferences to Indianapolis,” she said. “We took the bait and found everything was very nice, the hotel and the amenities. That’s why we’re there.”

As part of its effort to attract a variety of events and conventions, Indianapolis has put a focus on attracting professional conferences, said Chris Gahl, vice president of marketing and communications at Visit Indy. Having three legal-oriented groups come within two years indicates the city’s strategy is working.

Although these associations’ conventions are comparatively small, the people coming have disposal income and could do the one thing the visitors’ bureau wants — return to Indianapolis with family and friends. Seeing the attractions outside their hotel is critical to getting them to come back, Gahl said.

Aside from the positive economic impact, having these types of conferences here brings many intangible benefits, said Charles Dunlap, executive director of the Indiana Bar Foundation. The NLADA conference will put the national community of legal aid attorneys and public defenders in the city, where they will talk about what Indiana is doing.

The National Medical-Legal Partnership Summit provided the platform to showcase the Eskenazi Health Medical-Legal Partnership, which gets assistance from Indiana Legal Services, Faegre Baker Daniels LLP and the Neighborhood Christian Legal Clinic. Hoping to capture the energy from the national conference, Eskenazi Health and the Indiana Health Advocacy Coalition, the nonprofit which spearheaded the effort to bring the summit to Indianapolis, hosted a breakfast during the summit that brought about 75 leaders, primarily in the medical and legal communities, together to talk about collaborating.

Adam Mueller, director of litigation at ILS and vice president of the IHAC board of directors, said the summit came just as the local MLP is widening its mission.

“This is exactly the right time for us to have the conference here,” he said. “The conference will help us move to the next level.”

On its website with the summit details, the National Center included a special note about the accommodations. The nonprofit said it had selected a hotel and local vendors who value and respect others regardless of their sexuality or gender identity.

A similar message will likely appear on the NLADA’s website when the association posts its conference information, Soto said.

The messages are fallout from Gov. Mike Pence’s decision to sign the 2015 Religious Freedom Restoration Act, a measure that was viewed as allowing discrimination against gays, lesbians, bisexuals and transgender individuals. In fact, the Conference of Court PIOs had concerns and the National Center and NLADA were preparing to withdraw their conventions from the state. However, the groups changed their minds when the Legislature crafted a fix that eased the worst fears about the law.

Kate Marple, spokeswoman for the National Center for Medical-Legal Partnership, said because many partnerships around the country serve members of the LGBT community, the summit could not be held in a place that was devaluing these individuals. The legislative tinkering helped but also the atmosphere in Indianapolis — including the backlash against the law and the signs posted on many businesses welcoming everyone — persuaded the conference to stay.

For the groups in Indiana working to bring the summit and NLADA here, they could do little to counter the damage of RFRA. The Indiana Health Advocacy Coalition drafted a letter to the National Center and called upon others to write, emphasizing the law did not reflect the attitude in Indianapolis.

Amy Lewis Gilbert, IHAC board president, remembered her team feeling helpless. She and her colleagues had invested a lot of time and effort in convincing the summit to come, even raising $20,000 in private donations. They were disappointed, she said, but hopeful.

Although NLADA decided not to relocate, the organization incorporated a response into its meeting agenda. It added human rights to the conference theme of “Advocacy at the Crossroads: Equality, Justice and Human Rights,” Soto said, to underscore the association’s concern.

As Pollock’s plans for her stay in Indianapolis demonstrated, attendees to these conferences do not spend their days lounging around the hotel pool. Members come to learn and connect with colleagues across the country. Their days are packed with speakers, training sessions and panel discussions.

When the Conference of Court PIOs came, Kathryn Dolan, spokeswoman for the Indiana Supreme Court, and her team worked to develop a curriculum that would draw upon the unique resources in Indiana to help the attendees do their jobs better. Conference-goers were given a flavor of Indiana through presentations by state and federal judges and local attorneys as well as opportunities to see the Indiana Statehouse and the Indiana War Memorial.

“We just didn’t let a moment go by without saying, ‘What else can we learn?’” Dolan said.

Although they do not do much sightseeing, association members often make use of the downtown eating establishments. These members usually know each other through email and phone conversations during the year, so conferences are their only chance to meet in person.

Before the first full day of the summit, Pollock and her colleagues walked to Massachusetts Avenue for dinner. They spent just a little time outside the conference, but the city made an impression.

“We were struck by how kind everyone is here,” Pollock said. “Everyone who we’ve encountered from our taxi drivers from the airport to the waiter at the restaurant, everyone has been so kind and generous to us.”•