Flooded by pro se litigants and under pressure from the appellate circuit to provide attorneys, the U.S. District Court for the Southern District of Indiana is proposing the adoption of a mandatory pro bono program to supplement its volunteer pool.

Many of the pro se complaints have been filed by prisoners who are asserting civil rights or medical claims that entail extensive discovery and many motions. A quarter of all the civil cases lodged in the Southern District during fiscal year 2015 were filed by inmates representing themselves.

The Southern Indiana District Court already has a designated group of attorneys who volunteer to represent the pro se litigants either in mediation or at trial. However, the need for pro bono counsel is outstripping supply.

In addition, the 7th Circuit Court of Appeals has reversed some cases where the unrepresented individual had asked for the appointment of counsel but the District Court denied the request or could not get an attorney to volunteer.

To bolster the number of lawyers the judges have available for the pro se litigants, the Southern Indiana District is proposing a new rule adding a mandatory appointment program.
Proposed Local Rule 87, published by the District Court on May 13, will create two separate pools of legal counsel. The voluntary panel will consist of attorneys who are willing to provide their services while the obligatory panel will be composed of attorneys who could be drafted into accepting a case if no one from the former panel steps up.

In his letter announcing the proposed rule, Chief Judge Richard Young said the court does not want to place “an undue burden on the bar.” Still, he noted attorneys who represent the indigent litigants will be, among other things, fulfilling the oath they took when they were admitted to the Indiana Bar to never reject the cause of those who cannot afford legal assistance.

The Southern Indiana District Court is confident the proposed rule will provide a remedy.

“It will solve the immediate problem, which is the pressure on the court to recruit counsel for these complex prisoner cases,” said Kristine Seufert, the District Court’s staff attorney and pro bono coordinator. “It will absolutely resolve that problem.”

Attorney Jessica Wegg of Saeed & Little LLP was a member of the pro se committee that helped draft the rule.

She said she is “quite positive overall” about the proposed rule. Having attorneys available to help when the judge grants a request for counsel might bring about some different outcomes, she said. Cases could be diverted from trial and resolved through settlement conferences or mediations that could give plaintiffs some relief and lighten the court’s caseload.

“I think it’s good,” Wegg said of the rule. “These people, mostly inmates, are already down and out and if they are being harmed, they deserve to be heard and have their day in court.”

Still, she has heard complaints from other lawyers. Some are outraged because they do not want to be forced to work for free and others are angry because they expect these cases will require them pay out of pocket to cover expenses associated with litigation. 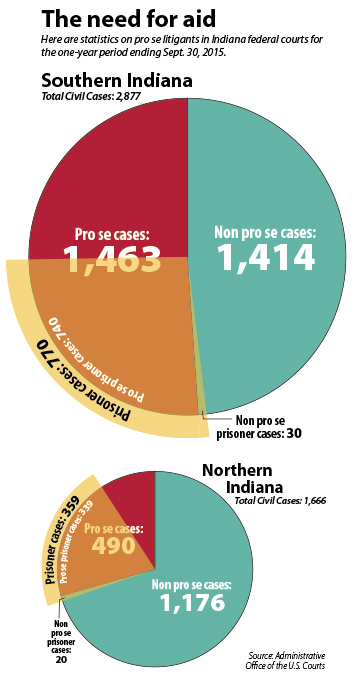 Wegg’s colleague Jonathan Little has accepted pro bono cases from the Southern District and, while he supports the proposed rule in general, he has concerns about the expenses the attorneys will have to bear.

Hundreds of dollars can be spent on transcripts, and thousands might be needed to hire a medical expert. If a case does go trial, the tally will hit five figures before the jury is even seated. Little also described as toxic the environment in Indiana where the prevailing pro-government and pro-insurance company attitudes makes cases difficult for plaintiffs to win.

Pro se committee member Richard Waples, partner at Waples & Hanger, agreed costs will be a hurdle for the pro bono attorneys to clear. From his own practice representing prisoners and victims of police misconduct, he has to be selective about which cases he takes because of the significant investment of time and money they require.

Although provisions are included in the proposed local rule that allow for attorney fees and reimbursement for certain expenses, he noted, “This is still going to impose a real cost to lawyers and it’s going to be hard on small firms and solo practices.”

However, Waples sees the move by the Southern District toward mandatory pro bono as necessary given the crisis of unrepresented litigants.

This problem is fueled by the mass incarcerations along with Congress prohibiting Legal Services Corp. from litigating these complaints and passing the Prison Litigation Reform Act in 1996, he said. Now prisons are overcrowded, conditions are not good and the number of attorneys who work on prison-reform cases has shrunk.

“This is the district’s best effort to do something to really address the need,” Waples said. “I applaud the judiciary for taking this step and I’m hoping it will help make conditions better for indigent prisoners and pro se litigants as a whole.”

Court has the power

The District Court’s analysis shows of the 38 requests for counsel granted since January, 12 remain without an attorney.

Under the proposed rule, cases not selected by the volunteer attorneys will be assigned to a lawyer in the obligatory pool. Barnes & Thornburg LLP partner John Maley, member of the pro se committee, believes attorneys who are angry at the possibility of being required to handle one of these cases are overreacting.

Local Rule 87 is “not a lightning bolt from the sky,” he said. Under 28 U.S.C. 1915 (e), the federal courts have the power to appoint counsel and have a history of doing so. In fact, the Southern District does not even need a new rule to tap attorneys into service, he said, but the proposed rule does provide a framework, predictability and structure to how the appointments are made.

“We have to address this because the 7th Circuit is commanding it,” Maley said.

The Northern and Southern District Courts in Illinois have mandatory pro bono programs with the southern jurisdiction requiring all attorneys admitted to accept appointments. In the Southern Indiana District, only those attorneys who have appeared several times will be obligated to take cases.

Lawyers looking to get the required volunteering overturned might find little sympathy in the courts. In the 2014 case, Dewitt v. Corizon, Inc., 760 F.3d 654, the 7th Circuit highlighted the Northern Illinois District’s mandatory program as being superior to strictly voluntary programs.

Attorney James Chapman, founder of the Illinois Institute for Community Law and Affairs, said the mandated pro bono is “going a long way” to address the problem of unrepresented litigants. He acknowledged some attorneys do a better job than others but no malpractice has been committed and the clients are getting the help they need.

“It’s as much as the court can humanly do to protect the rights of people in disadvantaged situations,” Chapman said.

The Southern District of Indiana estimates about 70 civil cases headed for trial per year will need pro bono counsel.

While the court emphasized it hopes to find willing volunteers for all the pro se litigants, any attorneys drafted into service may get the more complex and sticky cases.

The District Court has found cases needing only a short-term commitment, such as for a single-day mediation or short trial, were snapped up by the volunteer attorneys. But what Roger Sharpe, staff attorney and attorney to the clerk, described as the “middle chunk” of cases, such as those needing discovery or needed a summary judgment motion to be drafted, were often not selected.

Lee Hoefling, litigation liaison at the Wabash Valley Correctional Facility, does not expect the availability of counsel will inspire the inmates to file more lawsuits, but he does anticipate the corrections staff will be handling more discovery requests. Even so, the workload could be easier because an attorney’s discovery requests will be clearer and more precise than an inmate “noodling around in the law library.”

Hoefling was part of the pro se committee and sees nothing in the proposed rule that “causes heartburn” in terms of DOC providing assistance to the pro bono attorneys. If an issue arises during the implementation, he said, the department will call the District Court.