The recent death of an Indianapolis attorney who helped blaze the trail for female attorneys in the city has prompted other attorneys to take a look how far women have come in the legal profession.

Susan B. Tabler, who died May 29 at age 72, was among the first women to practice at a large Indianapolis law firm. She joined the firm in 1975 and spent her entire career there, retiring in 2006. She was the first woman partner in Ice Miller LLP’s labor and employment group. Previous female partners practiced in trusts and estates. By breaking that barrier, she left a legacy that other female attorneys have followed, but recent American Bar Association Commission on Women in the Profession statistics show there still is work to do.

The study, which was updated in May, shows women make up 36 percent of attorneys nationwide. About 20 percent are partners at law firms or equity partners. Nearly a third of law school deans, and active judges on the federal appellate courts, District Courts, and state courts are women.

Ray Hafsten Jr. practiced against Tabler in many cases and said she was very direct and up front, which he appreciated about her.

“She wouldn’t be kind and genteel over the phone and then in the written word take your hide off,” Hafsten said. “I think some of that is missing in young lawyers today. She did very well as a woman in the private sector.”

Kathleen DeLaney, a partner at DeLaney and DeLaney LLC in Indianapolis, said Tabler was a wonderful teacher who led by example, showing female lawyers they could succeed. She went through briefs DeLaney wrote and marked them line by line to point out how she could improve.

“She was a role model for me and she did that while raising two girls,” DeLaney said. “It’s helpful for women to observe others succeed in the path they’ve chosen for themselves and Susan did that. When I left Ice Miller, she gave me a leather-bound appointment book and dedicated it to me. I still treasure that to this day.”

Ice Miller partner Tami Earnhart often worked with Tabler while they were together at the firm. She said she wasn’t sure how Tabler felt about her role as one of the first women in a large law firm, but she was strong enough to be secure in herself and hold her own against anyone.

“I know she went through difficulties cracking the mold. Susan was strong and it didn’t take her long to prove herself. She stuck her ground and made her mark very quickly,” Earnhart said. “It’s only a barrier if you accept it. … Because of female attorneys like her, more women have been accepted in the profession. It isn’t a male-only profession anymore.”

Ice Miller partner Byron Myers said Tabler represented all of her clients with “great zeal” and she proved women could be tough and excellent litigators.

“There was no doubt whatsoever that women could be good in adversarial-type roles, partially because of her,” Myers said. “She was a good role model for other women in practice and did that while juggling the role of a wife and mother.”

Kristin Fruehwald, retired of counsel at Barnes & Thornburg LLP, was a classmate of Tabler’s at Indiana University Robert H. McKinney School of Law, where they graduated in 1975. She said she did not know Tabler that well but did recognize that she was one of the women, at that time, who helped blaze the trail for female attorneys today.

“There were three women there (at the law school) and we were treated very fairly. I think men were as interested as women to see if women could succeed. Because of attorneys like Susan, it was proven they could.”

Fruehwald said when she attended law school, women were a minority in law, but not as much anymore.

“There have been women in law firms for years and years and years, so it’s not an oddity anymore,” Fruehwald said. “I think law has been better than a lot of areas because everyone is equal under the law and I think they feel the same way in law firms.” 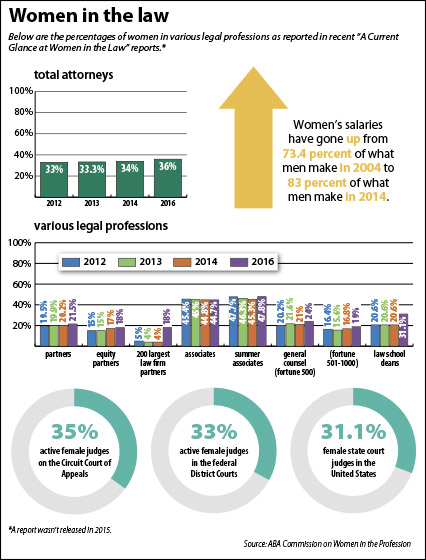 She said many women have proven they can raise children, cook dinners, clean the house and manage a job and “it’s remarkable women do so much.”

“It’s a lot more stressful than it used to be for everyone,” Fruehwald said. “Deadlines are shorter. People expect instant responses to email or phone messages, there’s more pressure out there now.”

Fruehwald said bar associations and their sections have been very helpful to her as she continued her career in law and have helped her with problems that have come up.

“I think it’s better if women can find a support group,” she said.

The recent ABA statistics have shown that things are improving and DeLaney, who was admitted to practice in 1995, agreed. She said pay inequities based on gender are getting better, and women have shown they can be successful. Women in law today make around 83 percent of what their male counterparts make, up from 73 percent in 2004, according to the ABA.

“The best place for a woman to be is in the kind of environment she wants to thrive in,” DeLaney said.

Earnhart said there are opportunities for women to continue to advance and grow if they can find their natural talents and feed them.