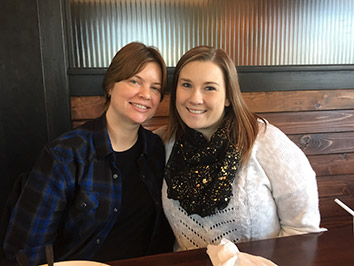 Although same-sex couples won the right to marry in Indiana in 2014, married lesbian couples found they still needed to fight to get the state to recognize them both as parents.

A group of female same-sex couples filed a lawsuit in 2015 arguing their 14th Amendment rights were being violated because the state was not listing them both on their children’s birth certificates. These plaintiffs were married and had made the decision jointly for one of them to be artificially inseminated.

Indiana has allowed husbands of women who undergo artificial insemination to be listed as fathers on the baby’s birth certificate but was not permitting the non-birth mother in lesbian unions to be listed as a parent.

In a ruling issued June 30, Judge Tanya Walton Pratt of the U.S. District Court for the Southern District of Indiana stopped the state’s discriminatory treatment of same-sex married couples. She agreed the statutes violate the Equal Protection and Due Process clauses of the U.S. Constitution and granted summary judgment in favor of the plaintiffs.

“Given Indiana’s long-articulated interest in doing what is in the best interest of the child and given that the Indiana legislature has stated the purpose of Title 31 is to protect, promote, and preserve Indiana families, there is no conceivable important governmental interest that would justify the different treatment of female spouses of artificially-inseminated birth mothers from the male spouses” of artificially inseminated birth mothers, Pratt wrote in Henderson, et al. v Adams et al., 1:15-cv-00220.

One of the attorneys representing the female couples emphasized the plaintiffs were not asking the state to give them special consideration.

“(These couples) will get the same treatment that a heterosexual couple under the same circumstances would get,” said Karen Celestino-Horseman of Austin & Jones P.C. “That’s what we were asking for, no more, no less.”

In a statement released after the ruling, Indiana Attorney General Greg Zoeller said the state has not decided whether to seek a stay from the District Court or appeal the ruling to the 7th Circuit Court of Appeals.

“Whenever any plaintiff challenges the constitutionality of a statute that the people’s elected representatives in the Legislature have passed, the Office of the Attorney General has an obligation to defend that statute in court,” Zoeller said. “We will confer with our state government clients to ascertain the impact of the court’s ruling reinterpreting parent rights, and will determine next steps by the appropriate deadlines.”

Pratt also dismissed the claims against the county defendants and enjoined the state from enforcing the parenthood statutes that prevent female spouses of birth mothers from being recognized as a parent and do not recognize the child of such unions as being born in wedlock.

Lead plaintiffs Ashlee and Ruby Henderson had their baby through artificial insemination in December 2014, after same-sex marriage was legal in Indiana. While completing the Indiana Birth Worksheet, the couple replaced the term “father” with “mother #2” but the birth certificate issued by the Tippecanoe County Health Department only noted Ruby, the birth mother, as a parent. They were told that Ashlee would not be listed as a parent on the birth certificate without a court order.

The couples charged Indiana Code 31-9-2-15 and 31-9-2-16, which define children born in and out of wedlock, along with I.C. 31-14-7-1, which establishes the presumption of paternity for the birth mother’s husband, were unconstitutional.

Wives of birth mothers had to legally adopt their children to be recognized as a parent. Celestino-Horseman pointed out the adoption process is personally invasive, with the applicant being subjected to a close examination by the state, and can cost several thousand dollars. But without going through the adoption process, the non-birth mothers had no parental rights. In cases where the wives were first responders or service members, the children would not be given survivors’ benefits in the event of a death.

The state argued that a husband who is not the biological father should not be listed on the birth certificate. Pratt viewed that argument as inconsistent with common sense since an artificially inseminated woman would likely indicate the man she is married to is the father of her child.

The judge was also unconvinced by the state’s contention that it has an interest in preserving the rights of biological fathers and maintaining accurate records regarding the biological parentage of children.

“In either event,” Pratt concluded, “the State’s interests in preserving the rights of biological fathers and maintaining accurate records of biological parentage are not served.”•