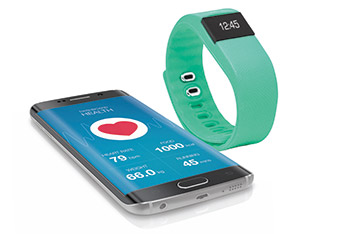 Marc McAllister has kept the stats from his daily workouts for the past 26 years.

When he began logging his running data in 1990, the Indiana Tech Law School assistant professor used a stopwatch to keep track of his time and drove his car along the routes he had just run to get the number of miles he traversed. These days, he wears a Tomtom Nike sports watch and lets the technology measure his pace, time and distance, which he reviews to help him improve as a runner.

McAllister has researched the increasing use of digital evidence collected from wearable fitness trackers, cellphones and other electronic devices in legal arenas and understands how the details of a person’s life can be accessed without the individual’s knowledge.

The law surrounding the information is still evolving, particularly in the area of privacy and Fourth Amendment rights. Civil, but more likely criminal, attorneys will be handling digital evidence more and more especially as law enforcement increasingly relies on technology to track suspects and link them to crimes.

A couple of instances have made headlines where fitness trackers were used to provide proof — one in a civil proceeding and one in a criminal investigation. The Federal Rules of Civil Procedure were amended to, partly, address digital evidence, and the Supreme Court of the United States has blocked police from using certain digital techniques to gather evidence.

In the meantime, the amount of personal data grows every day in the digital world.

McAllister knows that the details of where and when he ran are available through his watch to unknown third parties. Yet, when asked why he is comfortable with his workout data floating in cyberspace, he shrugs.

The academic answers with a response he often hears from his students but readily admits he hates — “If I’m not doing anything wrong, I don’t care who has my data.”

The two most notable cases involving a wearable fitness tracker demonstrate how much the digital data can tell.

A 44-year-old woman was ordered to serve two years of probation and complete 100 hours of community service after law enforcement looked at her Fitbit and discovered she had lied about being raped. In the spring of 2015, the woman called West Chester, Pennsylvania, police claiming she had been awakened at about midnight and sexually assaulted. However, when officers downloaded the data from her fitness watch, they found she had actually been awake and walking around when she said the attack happened.

A year before that, a Canadian law firm announced plans to introduce Fitbit data to show its client was still suffering from her injuries sustained in an auto accident. The glitch was the incident happened years before fitness trackers were available. But attorneys said they were going to collect the activity measurements from the device she currently wears then compare that to aggregated data gleaned from other wearers to show the plaintiff was less active than women her age and in her profession.

Still, the law surrounding digital evidence and the rules regarding admissibility are unclear.

To John P. Young, president of the Indiana Trial Lawyers Association, the introduction of information from electronic gadgets reminds him of when genetic testing started being used in court. As a personal injury attorney at Young & Young, he believes the law regulating digital evidence will develop as it did with DNA.

The laws governing how and when DNA could be admitted into evidence grew organically. Protocols about testing and sample sizes were put in place as attorneys probed the science and experts from the scientific community testified to the accuracy of the results.

Criminal defense attorney Laura Paul does not believe getting digital data into evidence will be as complicated as was constructing the road for DNA findings. She speculated getting information from personal devices admitted will be similar to how data downloaded from a computer is entered into evidence.

Rule 26 of the Federal Rules of Civil Procedure was amended in 2015 in response to the blossoming of electronic data. Under the old language, the scope of discovery could be made very broad, but the new rule requires that discovery be relevant to the party’s claim and proportional to the needs of the case.

McAllister sees the change as encouraging courts to exercise a little more control. With so much digital information available, the rule will help prevent a litigant, especially a little entity going against a big corporation, from getting buried in data and possibly losing the case by attrition through the discovery process.

However, he maintains Congress, not the courts, would be better at addressing these issues. Courts are tackling privacy concerns, but developing caselaw can take time, and judicial rulings tend to be narrowly focused on one aspect.

Setting parameters around the use and access to digital data will require Congress to write a whole new set of statutes. The legislators could write the law broadly enough to cover today’s technology and tomorrow’s innovations, something courts cannot do.

McAllister pointed to U.S. Supreme Court’s 2012 decision in United States v. Jones, 132 S.Ct. 945 (2012). The justices unanimously ruled that attaching a global positioning system tracker to a vehicle to monitor a suspect’s movements constitutes a search under the Fourth Amendment and requires a warrant.

Shortly after the opinion was handed down, McAllister talked to police officers and learned they were not concerned. They said they would just turn to cellphone data to find a person’s whereabouts. But a divided Indiana Court of Appeals panel on Aug. 4 threw out a man’s robbery-related convictions because police failed to get a warrant before obtaining his location history from his cellphone provider. The majority in Marcus Zanders v. State of Indiana, 15A01-1509-CR-1519, held that cellphone users have a reasonable expectation of the privacy of their location information that’s tracked and collected by phone service providers.

Still, just because the information comes from electronics does not mean it is reliable.

Young remembered the rise of thermography during his early career in the public defender’s office. The technology was touted as using body temperatures to find soft-tissue injuries but over time, the results were found to be unreliable and courts limited its admissibility.

McAllister contends the data gleaned from a Fitbit, GPS navigation device or another kind of high-tech gizmo is like any other evidence. To be presented in court, it has to first meet the standard of relevance then clear the higher hurdle of admissibility.

However once it is admitted, he concedes opposing counsel will have difficulty convincing the jury the information cannot be trusted. Although digital evidence can be wrong just like experts and eyewitnesses, juries tend to view the information as “extremely trustworthy.”

“I do think it’s extremely persuasive to juries because it seems to have the air of objectivity to it,” he said.

To Young, the wealth of personal data floating around is just beginning to be tapped. Companies are collecting and mining personal information without permission and people, particularly the young, do not realize how important confidentiality is.

He eschews social media and devices like Fitbit specifically because he does not want strangers peering into his private life.

While McAllister does not have a problem with his running times being available, he has a different reaction about his cellphone. The emails, text messages, banking information, apps and internet searches contained on his phone provide more private personal details than the data on his watch.