As the Indiana Court of Appeals calls for guidance on allowing journalists to use social media to chronicle criminal proceedings in real time, members of the media and legal professionals are working to define a set of in-court social media standards.

On Aug. 24, the Court of Appeals ruled that Christopher Compton, convicted of arson and felony murder in the deaths of his on-again, off-again girlfriend, Kerri Jones, one of her 3-year-old daughters and another occupant of Jones’ apartment building, was not denied due process when members of the media live-tweeted during his murder trial.

But the appeals court fell short of deciding whether tweets were the equivalent of prejudicial broadcasting as Compton had asserted. Instead, the court called for guidance, saying that it was time for rules for social media use in the courtroom.

James Ahler, judge in Jasper Superior Court and chair of the Judicial Conference of Indiana Community Relations Committee, said his committee has been working with the Hoosier State Press Association to develop guidelines for in-court social media use for the last three years.

Right now, there is no clear guidance on what sort of social media use crosses the line in courtrooms, said Steve Key, HSPA executive director and general counsel. The decision to allow or prohibit journalists from using social media during trials is up to judges in individual courts, Ahler said.

In Allen County, for example, cellphones are banned from entering the courtroom, while other courts across the state will allow reporters to bring their cellphones or laptops in to tweet or upload stories during proceedings, Key said.

At the Indiana Supreme Court, its rules regarding social media use are designed to increase transparency, said Kathryn Dolan, spokeswoman for the court.

A 2013 Indiana Supreme Court order establishes that personal computing devices may be used in the courtroom as long as they are kept in the back row and their noise, including the sound of typing, is kept to a minimum. The only expressly prohibited uses of such devices listed in the order are the use of audio, video and photo functions. 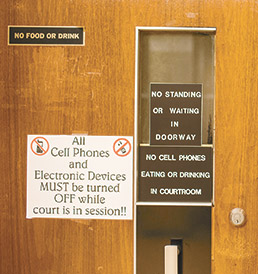 Cellphone and social media use varies around the state depending on the court. All devices must be off in this Marion County courtroom. (IL file photo)

Both Dolan and Ahler said there is one notable difference between appellate courts and trial courts that makes it difficult for the Supreme Court’s social media policy to become the law of the land — jurors.

Although jurors are instructed not to read or seek out news coverage related to their case until the trial is over, social media opens up new and additional opportunities to learn how the media is covering the trial and public reaction to the case.

Similarly, although witnesses may be separated, allowing journalists to live tweet a trial could cause one witness to learn what another witness said on the stand, which could affect how the other witness testifies and change the course of the trial.

In trying to find the balance between transparency and the rights of the parties in the case, Ahler said there are some key questions the Community Relations Committee and the HSPA have been working together to answer.

The first question is to define who constitutes a journalist, Ahler said. Indiana Code provides guidelines, such as in Indiana Code 34-6-2-87, which defines a news service as an entity with subscribers that gathers and transmits news to its subscribers and has an office Indiana. This has helped guide the conversation about journalists’ use of social media at the trial court level, Ahler said.

Further, the use of social media during criminal trials begs the question of what constitutes broadcasting, Ahler said, the same question that prompted the Court of Appeals to call for guidance in the Compton case.

No one has been able to determine a definitive answer yet, Ahler said, and his work with the HSPA has not determined a definition for broadcasting, either. But when a resolution is found, it will likely go a long way in determining what devices and apps are acceptable for trial courts, the judge said.

If trial courts adopt policies allowing journalists to use social media during proceedings, then they will be forced to re-examine jury instructions, Ahler said. Jurors will likely be instructed to put their communications devices away — or the courts may take them away — to avoid the risk of finding outside information about the case, he said.

As his organization has been reviewing these issues, Key said his focus remains fixed on increasing court transparency.

As long as jurors are instructed not to look at social media sites that might contain information about a case they are hearing, then Key does not think allowing journalists to live-tweet trials would affect a defendant’s right to due process.

The HSPA director also said the judicial branch has historically been at a disadvantage in its relationship with the public because of its restrictions on media coverage, particularly in regard to video and still photography.

But if journalists were allowed to live-tweet or do other similar reporting from the courtroom, people could get a better look inside the judiciary in real time, he said.

While members of the judicial branch say they are in favor of increasing court transparency, they also stressed balancing transparency with the rights of the parties involved in criminal proceedings.

Michael Gaerte, a criminal defense attorney with Bingham Greenebaum Doll LLP, said as a personal rule, he does not read news coverage of the trials he’s involved in because he does not want that coverage to affect his mindset about the case.

Gaerte said he enjoys reading reporters’ tweets from other criminal proceedings, but also said at times those tweets can be inaccurate simply because of human error. He said small mistakes in tweets could have a significant impact on criminal proceedings if jurors saw an incorrect tweet and took it for fact.

Similarly, if a juror saw a tweet about a piece of evidence or testimony that they had overlooked during the trial, they might take note of it only because they saw it online, which could change their thinking about the trial, he said.

If he were working for a defendant in a criminal trial where journalists were allowed to tweet, Gaerte said he would have serious concerns about the jurors in his case learning outside information that could have a negative impact on his client’s rights and fate.

“If some reporter (a juror) follows is there, you automatically have a real problem with prejudice at trial, so I think it’s about imposing more measures on the front end to avoid people learning information,” he said.

As Ahler and the Community Relations Committee continue working with HSPA to develop social media guidelines, he hopes members of the judicial branch will heed the Court of Appeals’ advice and begin seriously examining the polices they currently have in place.

“This is an issue that is coming up all around the nation, and I think it would speak well of the state judiciary to be a leader instead of a follower in trying to find the best solution for advancing technology with other needs that would need to be kept private,” he said.•