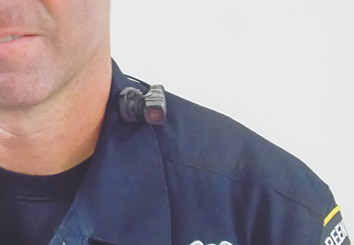 Indiana prosecutors’ concerns that they could face disciplinary proceedings if they release police body camera video will likely remain unalleviated by either the Statehouse or the Indiana Supreme Court.

Hoosier State Press Association Executive Director Steve Key, who coordinated the meeting, was hoping the Supreme Court would allow the Disciplinary Commission to give an advisory opinion about the new law. However, the general consensus was to give the law more time to work before the Supreme Court or the Legislature takes any action.

Key said he wishes the concerns could be addressed now but he conceded the law is still very new and no problems have been reported with its implementation.

“If we can’t show the process is not working, then we can’t expect the Legislature to jump out there and say we need to make this change,” he said.

House Enrolled Act 1019 establishes policy for law enforcement agencies in Indiana on how long to store body camera video and who can see it. The law, authored by Rep. Kevin Mahan, R-Hartford City, was the product of an interim study committee and picked up bipartisan support in the Statehouse.

Yet after the bill was passed, the Indiana Prosecuting Attorneys Council said its members were worried that releasing the video before a criminal case was completed would violate Indiana Rules of Professional Conduct 3.6 and 3.8.

IPAC Executive Director David Powell was at the meeting with court officials but he could not be reached for comment.

“I’m disappointed that this issue didn’t emerge during the legislative process when maybe it could have been address at that time,” Key said.

Sen. Rodric Bray, R-Martinsville, said he is not sure the Rules of Professional Conduct “completely conflict with the law.” Specifically, he pointed to the language now included in Indiana Code 5-14-3-5.2 that outlines the conditions for releasing the video. He said the law’s provision tracks closely to Rules 3.6 and 3.8 that focus on ensuring a fair trial, which should help address some of the prosecutors’ concerns.

Bray, an attorney, was a sponsor of the body camera legislation and attended the meeting with Key, Powell and the court officials.

Indiana Supreme Court Chief Administrator Mary Willis, who also participated in the meeting, echoed the senator. She said the legislation was “well drafted” and provided a remedy for the prosecutors’ concerns. Namely, the state attorneys can ask for an evidentiary hearing to determine whether the video should be released.

She conceded that provision could not shield all prosecutors from a disciplinary complaint. But because the concerns are still hypothetical, Willis said, “At this time the court does not anticipate any guidance being issued.”

Calling the meeting “pretty productive,” Bray emphasized the Legislature has to be careful to not overstep the separation of powers and encroach into the judiciary’s territory. The General Assembly cannot pass a law that impacts the rules of the court, he said, but the Statehouse and the judicial branch need to work together so as not to send mixed messages.

A fix for the law is difficult since at this time, it is still rather new and apparently has not yet been tested in court. Key did an informal survey of HSPA members and found no one had been denied access to the videos or knew of anyone who had been denied access. As he noted, there is not a body of evidence indicating the statute needs to be changed.

Still, he said it doesn’t matter whether the courts or the Legislature addresses the concerns. The point is to not have prosecutors always saying no to the release of video because they want to avoid any potential disciplinary action.

Bray does not believe the Rules of Professional Conduct will be used to prevent the release of all body camera videos. The goal of the bill was to improve transparency, but he wants to see how the law plays out before tinkering with it.•