Nearly 20 years’ worth of data tracking trends of federal civil pro se filings show that civil rights cases make up the second-highest percentage of filings, next to pro se prisoner cases. In recent years, a growing number of those cases have targeted law enforcement or other government actors.

Four former Minneapolis police officers charged with violating George Floyd’s civil rights are scheduled to be arraigned in federal court Tuesday at a hearing that could also address some pretrial motions.

Police officers swarmed a northwestern Indiana high school Wednesday on a report of an active shooter that authorities said turned out to be a false alarm.

The family of a Pennsylvania man who died in Evansville police custody in 2019 after struggling with officers is suing the city and three officers, alleging they caused his death by using excessive force.

A former Georgia prosecutor was indicted Thursday on misconduct charges alleging she used her position to shield the men who chased and killed Ahmaud Arbery from being charged with crimes immediately after the shootings.

Justices: Officers that detect odor of raw marijuana may establish probable cause based on ‘training and experience’ 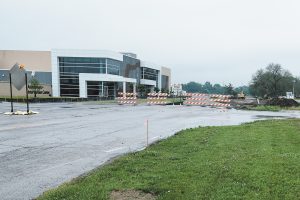 Detailed plans that carefully choreograph the movement of each box and piece of furniture are being set into motion as the Marion County courts and jails begin the process of relocating from downtown Indianapolis to the new Community Justice Campus on the east side of the city. The move-in dates are now just months away for the $567 million justice campus campus that broke ground in 2018.

U.S. Capitol Police officers who were attacked and beaten during the Capitol riot filed a lawsuit Thursday against former President Donald Trump, his allies and members of far-right extremist groups, accusing them of intentionally sending a violent mob on Jan. 6 to disrupt the congressional certification of the election.

U.S. Capitol Police didn’t adequately respond to frantic calls for help from officers when they pressed panic buttons on their radios seeking immediate backup as scores of rioters beat officers with bats, poles and other weapons, an inspector general’s report found.

A Democratic senator said the U.S. Justice Department needs to look into whether the algorithm-powered police technologies it funds contribute to racial bias in law enforcement and lead to wrongful arrests.

Man surrenders after claiming to have bomb near US Capitol

A North Carolina man who claimed to have a bomb in a pickup truck near the U.S. Capitol surrendered to law enforcement after an hourslong standoff Thursday that prompted a massive police response and the evacuations of government buildings in the area.

A wrongful imprisonment lawsuit filed by an Evansville family against local police has been put to rest years after three teens were allegedly coerced into confessing to murdering their homeless uncle — something the accused claim never happened.

Three people including a police officer were wounded and a suspect was dead in a shooting connected to a reported domestic disturbance in Indianapolis, authorities said.

An Indianapolis man who says he was paralyzed while being taken to jail in 2019 has filed a federal lawsuit alleging officers threw him head-first into the back of a van that had no safety restraints.

A Texas appeals court on Thursday upheld the murder conviction of a former Dallas police officer who was sentenced to prison for fatally shooting her neighbor in his home.

A former Muncie police officer is facing up to three years in prison after he pleaded guilty Wednesday to intentionally concealing a fellow officer’s inappropriate use of force.

Federal investigators were digging Wednesday into the background of a Georgia man who officials say fatally stabbed a Pentagon police officer at a transit station outside the building before being shot and killed himself.

A man accused of fatally shooting a western Indiana police officer during an ambush outside an FBI field office will appear in federal court in mid-August for his initial hearing in the case.