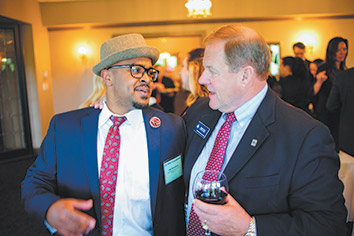 The coming vacancy in the Indiana State Bar Association’s executive director position has attracted national attention with more than 50 applications submitted even though the job opening was only posted about a month ago.

Still, the consultants working with the search committee have advised that the candidate who meets all the association’s needs and wants does not exist.

Adinamis of Adinamis & Saunders P.C. chairs the 11-person succession and search committee convened to identify the candidates best suited for the job. The committee is made up of only Hoosiers and includes members of the private bar, the judiciary and at least one former president of a county bar association.

Finding the next executive director will not be easy. Upheaval in the legal profession caused by technology, the rise of legal service providers and a new generation of attorneys will bring challenges unlike bar associations have seen. 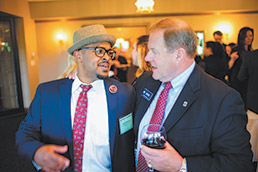 ISBA Executive Director Tom Pyrz (right, with attorney Carlton Martin) will be retiring after 25 years. A key issue for the next leader will be growing membership, which has ranged between 12,000 and 13,000 for the past 10 years. (ISBA photo/Vincent Morretino)

Adinamis said the succession committee is not interested in a candidate who views the ISBA position as a stepping stone. Rather, the group is searching for someone who will be excited, bring fresh ideas and serve as long as Pyrz.

Noting the consultants indicated that the trend is for people in executive positions to leave after 10 years, Adinamis said, “We hope it’s longer, because we think we’re going to pick an extraordinary person, and we want them to stay.”

The ISBA is one of 10 state bar associations around the country either looking for or welcoming new executive directors since 2016, according to Pamela Robinson, division associate director of the National Association of Bar Executives. Typically, the turnover rate averages about two per year, but the uptick in activity is being fueled by retirements of longtime bar leaders.

Like Pyrz, many of the outgoing leaders have been in their positions for 15 or 20 years. Robinson acknowledged replacing such experienced leaders will be difficult but, she said, bar associations must be strategic and think carefully about what they want in the future.

The firm is collecting applications as well as reaching out to select individuals believed to have the right credentials for the job. It will also do the initial vetting and winnow the applicant pool down to 10 or 12 individuals. Those candidates will then be presented to the succession committee, which will conduct a second round of interviews before choosing the top two or three to recommend to the board of governors. From that group, the board will pick the new executive director.

“From our perspective, the caliber of individuals on the ISBA search committee is exceptional and their commitment to the process is outstanding,” said Joel Epstein, managing director of the Waverly Partners office in Toledo, Ohio. “We’re very encouraged they will be a strong and good committee to work with going forward.”

The people who have submitted their resumes come from a broad range of backgrounds and experiences. Adinamis said the applicants represent a good mix of lawyers and non-lawyers. Some have experience leading bar associations while others have worked for different types of nonprofits or in government or the private bar.

“It’s going to be a tough job to thin out the candidates,” Adinamis said. “I have no doubt.” 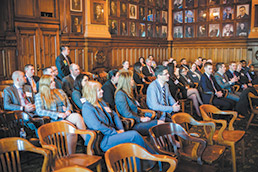 To craft the position profile that includes the requirements and preferred qualifications of the next ISBA leader, Waverly Partners talked to diverse groups of attorneys around the state along with Indiana Chief Justice Loretta Rush and retired Chief Justice Randall Shepard.

From those meetings, Epstein said the trait most wanted in the new director was “servant leadership.”

Indiana’s state bar is a voluntary association, and the attorneys who donate their time to serve as president and on the board of governors run the organization. The incoming executive director will not set the association’s agenda but instead will have to implement the priorities set by the leaders and corral all the members to get onboard.

“Whoever it is will have to have the special ability to guide the association and not actually tell people what to do,” Adinamis said.

The next ISBA leader will be expected to tackle challenging issues such as increasing membership and adding to the products and services available to members. The new director will have plenty of company because state and local bar associations across the country are facing similar demands.

According to Molly Kilmer Flood of the American Bar Association Division for Bar Services, the outstanding trends that are shaping association agendas include two that arise from the ongoing generational shift.

The legal profession as a whole is aging with the baby boom generation starting to retire, but younger attorneys coming into the practice are not as interested in joining their bar associations. Attracting Generation X and millennial attorneys is difficult because enticements such as continuing legal education and networking traditionally offered only by bar associations are now available through many other venues.

“I think Indiana has enjoyed a greater market share than other states,” Flood said of the ISBA membership. “But membership is not guaranteed anymore and bar associations that are voluntary really have to work to provide a value to their members.”

When it began searching for a new executive director in 2015, the Allen County Bar Association specifically searched for someone who could increase the number of members.

“We wanted somebody who had enthusiasm to pump new blood into this organization,” said search committee member Dustin Roach of Van Gilder & Trzynka P.C. “Someone who understood how to enhance and grow our membership was a primary focus of what we were looking for.”

From the applicants, six immediately rose to the top and offered an array of experience including in hospital and office management. Gina Zimmerman, who was selected as executive director, had previously worked for former Indiana Rep. Mark Souder and South Carolina Sen. Jim DeMint.

Once Zimmerman was hired, Roach said she was at virtually every meeting and CLE, introducing herself to the members. “Her enthusiasm and vitality did come through very quickly,” he said.

Roach also noted the association has a role in keeping the new executive director motivated and wanting to stay. Rather than meeting with her once a month, the bar association leaders have been routinely connecting with Zimmerman and supportive of her work.

“I really think the board of governors’ consistency and actual involvement in giving back to the executive director is vital,” Roach said.•